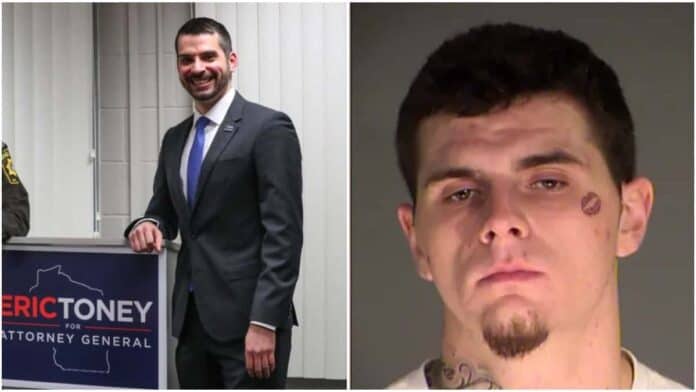 “We will continue to partner with law enforcement to aggressively prosecute those that poison our community by dealing drugs and also seeking treatment options for those battling addiction,” -Eric Toney

In a press release announcing that a local methamphetamine dealer was sentenced to prison, Fond du Lac County District Attorney Eric Toney called on the federal government to “gain control of the border crisis,” saying that “this border crisis is contributing to deaths within our community and has literally spilled into our streets.”

David S. Bresser was sentenced in a methamphetamine drug overdose homicide and fentanyl delivery in Fond du Lac County. Toney used the case as a moment to highlight the source of many lethal drugs in Wisconsin, saying,”fentanyl and methamphetamine pour across the Southern border.”

Eric Toney is running for Wisconsin Attorney General as a Republican (Professor Ryan Owens is the other Republican primary candidate). Eric Toney is highlighting his experience as a front-line prosecutor.

We previously published a lengthy investigative report on AG Josh Kaul’s crime lab delays and backlogs; one of those areas involves delayed testing for controlled substances. Kaul’s delays are worse than those under his predecessor, former Republican AG Brad Schimel. This is despite the fact that Kaul’s Wisconsin crime lab is handling FAR fewer cases.

Eric Toney announced that Bresser was sentenced to 8 years of initial prison confinement and 4 years of extended supervision for his role in delivering methamphetamine resulting in a victim’s death in the City of Fond du Lac. The victim was identified in Fond du Lac media as Robert Thorp. He was convicted of drug dealing and first-degree reckless homicide.

Bresser was also sentenced to a concurrent 3 years of initial prison confinement and 3 years of extended supervision for an unrelated drug delivery of fentanyl that occurred on August 6, 2020 in the City of Ripon.

“Overdose deaths are a heartbreaking loss of life and we experienced too many of those heartbreaks in 2020. My heart goes out to the families that have suffered one of these tragic losses as well as to those with a family member battling addiction,” Toney said. Fond du Lac county recorded 30 overdose deaths, last year, a record. Almost all involved fentanyl.

“We will continue to partner with law enforcement to aggressively prosecute those that poison our community by dealing drugs and also seeking treatment options for those battling addiction,” said Eric Toney, a Republican who has been Fond du Lac County DA for more than 9 years. “Our Federal government must direct more resources to the southern border and gain control of the border crisis. This border crisis is contributing to
deaths within our community and has literally spilled into our streets.”

In the press release, Toney wrote, “Drug cartels are pouring fentanyl and methamphetamine into our country and into Wisconsin at a record pace. Customs and Border Protection seized more fentanyl by April of 2021 then had been seized in all of 2020.”

According to the Bresser complaint in the death, on April 4, 2020, an officer was dispatched to a bridge located near the dead-end portion of South St. in the City and County of Fond du Lac, Wisconsin for a report of a possible deceased body in the water.

Testing showed the victim was “positive for THC, methamphetamine, and amphetamine with final toxicology results pending,” the complaint said. A witness said he saw the victim on his residential property in the City of Fond du Lac and the victim had belongings in the garage.

Another witness said the victim  “had been using heroin on and off and needed help. Witness 2 described an event approximately 1 year prior in which Victim 1 had been doing well and then Witness 2 observed Victim 1 overdosed on the kitchen floor from heroin.”

Authorities found a syringe with liquid residue in the victim’s belongings. “Members of Victim 1’s family indicated over the “last couple years’ that Victim 1 ‘wants to kill himself,'” the complaint said.

Detectives found Facebook messaging between Bresser and the victim regarding the victim purchasing a “tweek,” which is a slang term for meth.

“In the messages, Bresser is observed to have sent Victim 1 a crystal-like substance image in a plastic baggie. Bresser was not interviewed as he was unable to be located,” the complaint said. Contact was then made with him but he failed to show up, the complaint says, adding that the cause of death was eventually listed as an accident and ‘methamphetamine toxicity.’”

“Detectives obtained David Bresser’s Facebook Messenger messages and Detective Bobo was able to review those messages on August 11, 2020. Detective Bobo observed David Bresser having numerous conversations with people about dealing and using drugs,” the complaint said. “Bobo also located a conversation between Victim 1 and Bresser on April 3, 2020. During these messages, Bresser and Victim 1 arrange a drug transaction for ‘Tweek’ in which Victim 1 will pay $80 to Bresser for Tweek and $10 for gas as Victim 1 is in Fond du Lac and Bresser appears to be in Ripon, WI. Bresser tells Victim 1 he arrived in Fond du Lac and Victim 1 indicates that he’s walking to the Kwik Trip on 11th and Main St. Bresser then agrees to meet Victim 1 at that Kwik Trip location, which is located in the City and County of Fond du Lac, Wisconsin.”

Authorities then arrested Bresser. They “explained having 3,000 pages of Bresser’s Facebook records and know he has been dealing to numerous individuals, including Victim 1. During the interview, Bresser stated that he hadn’t heard from Victim 1 in years. Bresser then stated he didn’t even give Victim 1 enough to be able to overdose. Bresser stated he gave Victim 1 ‘like $20 worth,'” the complaint says.

“Detective Bobo explained to Bresser that based on the toxicology results there’s no way it was only $20 worth of drugs. Bobo explains to Bresser that one never knows how strong or weak the meth is because we don’t know how many times it has been cut or added to in order to strengthen or weaken the drug. Bresser said the deal for the $80 changed because he didn’t have enough.”

He had a previous conviction for burglary.

According to a second criminal complaint in the case, on August 6, 2020, at approximately 10:39 pm, City of Ripon Police Sergeant Travis Borkenhagen, Investigator Jesse Tipton, and Officer Bradley Kurczek were dispatched to an apartment at 432 Eureka Street, in the City of Ripon, Fond du Lac County, to investigate a medical complaint.

“Investigator Tipton and Officer Kurczek know, from training and experience, that tin foil is often used to hold and cook narcotics and cotton balls can be used as a filtering agent when injecting narcotics. Both officers also recognize that a rolled up bill can be used to snort drugs.”

Investigator Tipton went to speak with the defendant in the hallway. “Officer Kurczek continued to speak to Williams who eventually admitted to shooting what she thought was heroin just prior to the officers arriving. She stated the defendant brought the suspected heroin over to share. Williams stated she passed on in the Southwest corner, using the blanket as a pillow. Williams also stated that while she used a needle to inject drugs,” the complaint says.