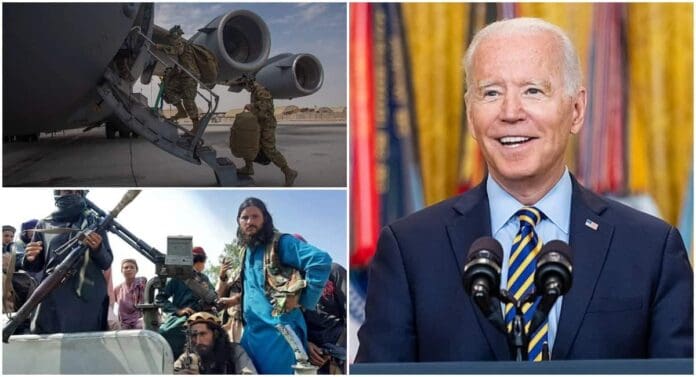 “I lost friends in Afghanistan. We’ve seen this before in how Obama-Biden withdrew from Iraq in 2011. Same leadership. Same failure.” – U.S. Rep. Mark Green

Reports of violence and chaos in Afghanistan as the Taliban asserted control of the nation has sparked criticism of President Joe Biden, but the president reaffirmed his commitment Monday to the Afghanistan withdrawal.

Biden ordered 5,000 troops last week to return to Afghanistan temporarily to help evacuate the U.S. embassy. Those troops were needed after a sweeping takeover of the nation by the Taliban, the Islamic extremist group known for its violence, oppression of women and involvement in the Sept. 11 terrorist attacks.

Biden addressed the fallout of the U.S. removal of troops from Afghanistan in a speech from the White House.

“Here’s what I believe to my core,” Biden said. “It is wrong to order American troops to step up when Afghanistan’s own armed forces would not. The political leaders of Afghanistan were unable to come together for the good of their people, unable to negotiate for the future of their country when the chips were down. They never would have done so while U.S. troops remained in Afghanistan bearing the brunt of the fighting for them. And our true strategic competitors, China and Russia, would love nothing more than the U.S. to continue to funnel billions of dollars in resources and attention into stabilizing Afghanistan indefinitely.”

Trump on the Afghanistan Withdrawal

President Donald Trump set the Afghanistan withdrawal date during his administration for earlier this year, but Biden pushed it back after taking office. Trump has since called for Biden’s resignation, saying he would have handled the withdrawal differently.

While initial estimates questioned the Taliban’s ability to retake the country, or at least expected the process to take months, the terrorist group was able to take every major city, including the capital, within days.

“I fought in Afghanistan,” U.S. Rep. Mark Green, R-Tenn., said. “I lost friends in Afghanistan. We’ve seen this before in how Obama-Biden withdrew from Iraq in 2011. Same leadership. Same failure.”

Republicans in the House and Senate also have criticized Biden for his handling of the Afghanistan withdrawal.

“Biden’s decision in Afghanistan undermines America’s credibility around the globe,” U.S. Sen. Tim Scott, R-S.C., said. “His actions have destabilized the region and put Americans, our allies, women, and children in Afghanistan at greater risk of harm by the Taliban.”

Others pointed to the humanitarian crisis as religious minorities, foreign residents, women and those known to have helped the U.S. face danger as the Taliban establishes its rule.

“I stand squarely behind my decision,” he said. “After 20 years, I’ve learned the hard way that there was never a good time to withdraw U.S. forces.”

Biden has remained firm in his Afghanistan withdrawal position, saying the Taliban takeover was inevitable.