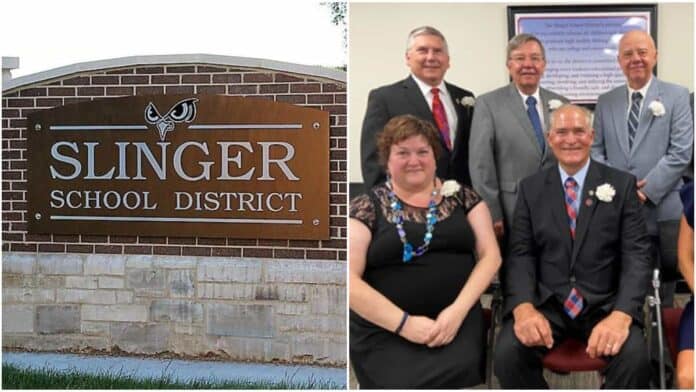 “…You are taught to treat individuals differently in the classroom by the color of their skin,” a parent says.

A parent dialed into a Slinger School Board meeting and accused the district of training substitute teachers to treat children differently based on their race.

Wisconsin Right Now has contacted the Slinger School District’s superintendent and the School Board president to seek their comment. A response, if received, will be added into this article. In the meeting, Daren Sievers, the Slinger superintendent, said, “Certainly CRT is not in our curricular cycle right now.”

Robin Hora explains how she was instructed to treat kids differently based on their race. She was told If she didn’t follow the curriculum she was racist. She has the receipts. pic.twitter.com/MQWoxFSnok

In the video, the woman said, “I was one of those parents that did sign up to help in the classroom and I was shocked. I have screenshots, I have information that I can share with you, but the staffing agency that Slinger uses to staff subs, and things like that. The members are required to take online courses and pass those online courses.”

She continued, “It seems very harmless, only about an hour or less long. But you have to go through, and you are taught to treat individuals differently in the classroom by the color of their skin. You are taught, and told, that if you go into the classroom that you are applying to go into, that if you go into it colorblind, quote unquote colorblind, that you are racist.”

She continued, “That is in the online courses that you are required to take and pass to be a substitute teacher in the classrooms currently at Slinger, in the Slinger school system. You are told and taught that if you have any kind of views that are colorblind that is racist and if you treat children the same that you are racist and that you are not treating them well and that they should have different consequences for the same action based on the color of their skin.”

She said this “is a problem currently.” She also criticized some of the curriculum relating to CRT and transgender and “fluidity issues that I don’t think parents know are in there.” The parent said she felt an audit was necessary.

During the meeting, Assistant Administrator Jim Curler said, “We have hundreds of courses throughout the district…and tens of thousands of assignments. If there is something that a parent would have a question about, I would ask them to respectfully ask the teacher what the purpose of that lesson was and then move on to the principal if that is necessary…it’s not something that we are promoting, and I can guarantee that the School Board and community that I work for, if this was something that we were moving towards, this would be publicized, and we would be seeking community input before we did that.”

Sievers responded, “I wish we would have been notified about this earlier. We could have worked on this months ago. If parents have a concern they should contact us at that moment.”

A Parent & Coach Asked the District to Ban CRT

Bill Brewer, a parent and coach, said he felt an audit was necessary. “I would not have believed when we were asking for volunteers among our parents and from others in the district to be substitute teachers during COVID, I would not have expected that the coursework they would have to go through would include some of this ideology but it did. And I know this because my own daughter was that person,” he said.

“My name is Bill Brewer. I’ve lived in Slinger for 18 years. I’ve served the youth in Slinger for nearly that whole time, and I’m currently in my seventh year as President of Slinger Gridiron. And I’m a black man,” said Brewer. Among other comments, he said of CRT, “It’s entirely accurate to say this is Marxist at it’s core; that’s a factual statement, not a political one. The purpose is to cause irreparable harm to our country and overthrow our system of government.”

He continued, “We are being told that white people are evil just because they’re white, that they enjoy levels of privilege not available to blacks and that they’re simply racist to their core – whether they realize it or not. And all of the other ethnic groups: They’re just ignored in this conversation. Every bit of this is WRONG.”

Brewer said: “The enemy is inside the gates, and as a parent and grandparent of Slinger students – and as a black man – I’m very concerned that our school board has been silent on this serious issue. We need to take a stand, ladies and gentlemen. We need to do it now! We need to immediately ban teaching CRT as an integral construct from all of our curricula at every grade level.”

He said he didn’t think there was necessarily intent “to include this.”

He added, “It’s so pervasive. It isn’t new. It’s been happening for years…We can’t just assume it’s not there, and should take a look at what our teachers are being fed by the state.”