New Wauwatosa Police Chief Will Be From MPD 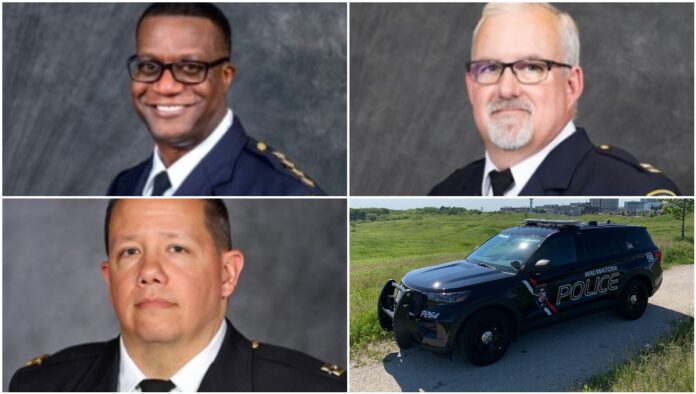 The finalists are in for the new Wauwatosa police chief and all three are current or retired Milwaukee Police Department commanders. One, Jeffrey Norman, is currently the acting MPD chief, but his future in that post is uncertain as the city continues to delay in coming to a decision on the Alfonso Morales mess.

There are three candidates for Police Chief, Wauwatosa announced, and there wasn’t a social activist in the group. Instead, all three are long-time commanders with the MPD: James MacGillis, Jeffrey Norman, and David Salazar.

The public “can submit potential questions before June 7 to be used in a public forum interview for the finalist candidates. These questions will be screened by the Human Resources Department,” Wauwatosa announced.

Interviews are scheduled for June 14, and there will be a public forum. The Police and Fire Commission will make the final decision. Veteran chief Barry Weber is retiring after decades serving the city.

Milwaukee Common Council President Cavalier Johnson responded to the news by urging Milwaukee to retain Norman as chief. That’s despite the fact a judge ordered the reinstatement of Morales unless the city settles with him, although that order was stayed for 45 days. The city has also had a botched police chief search.

“It was reported that Milwaukee’s Acting Police Chief Jeffrey Norman is a candidate for the police chief position in neighboring Wauwatosa. Upon hearing this news I could only think, it would be tragic and a mistake for our city to lose such a talented and dedicated individual to a municipality that is literally across the street,” Johnson said.

“Acting Chief Norman’s resume speaks for itself. He’s a Milwaukee native, has a nearly 20 year background in law, and has 25 years of experience in law enforcement in a variety of capacities. On top of all of this, he is well respected by the community, his fellow officers, as well as members of both the Common Council and the Fire and Police Commission. This decision seems like an easy one – Jeffrey Norman should become permanent chief.”

Johnson added, “I’m calling on the City Attorney and the FPC to sort out this situation in a timely manner so that we can have stability and certainty in the leadership of the Milwaukee Police Department and not lose Jeffrey Norman who represents our best chance at those things.”

Here are the finalists’ bios. Who do you prefer? Tell us in the comments.

James is an emeritus Law Enforcement Advancing Data and Science (LEADS) research scholar with the National Institute of Justice and has consulted on several research projects with RAND Corp, George Mason University, the Police Executive Research Forum (PERF), National Law Enforcement Firearms Instructors Association (NLFEIA), International Association of Directors of Law Enforcement Standards and Training (IADLEST), and IACP (International Association of Chiefs of Police). He holds a master’s degree in Administrative Leadership from the University of Wisconsin-Milwaukee focusing on adult education programs. He is also a WI-DOJ Command College graduate and Certified Public Manager through UW-Madison. He has also served in the US Army (active and National Guard) as a combat medical specialist and was the Military Liaison Officer for the Milwaukee Police Department, assisting separating and returning service members and their families during deployments. Prior to his military service, James grew up in Wauwatosa, having attended Washington and Underwood Elementary Schools, Whitman Middle School, and graduated from Wauwatosa West High School.

Norman is the acting Milwaukee police chief. Wauwatosa released this bio for him:

“Jeffrey Norman is the current Acting Chief for the City of Milwaukee. Jeff was appointed to the Milwaukee Police Department in 1996. As an officer, Acting Chief Norman served in District 1, District 2, and the Technical Communications Division until his promotion to detective in 2002. As a detective, he served in the Robbery Division, Violent Crimes Division and Homicide Division until his promotion to lieutenant in 2010. As a lieutenant, he served in the Property Crimes Division, Metropolitan Division (Robbery Task Force, Homicide Unit and Cold Case Unit) and District 5 as the dayshift commander. Promoted to captain in 2017, he commanded the Inspections Division and District 3. In 2020 he was promoted to Assistant Chief.

On December 23, 2020, he was appointed to serve as the Acting Chief of the Milwaukee Police Department.

Acting Chief Norman holds a Bachelor of Science degree in Criminal Justice from the University of Wisconsin-Milwaukee, a Masters of Public Administration degree from Kaplan University, and a Juris Doctor degree from Marquette University Law School. Acting Chief Norman is a graduate of the FBI LEEDA’s Executive and Command Institutes, Southern Police Institute’s Chief Executive Leadership, International Associations of Chiefs of Police’s Leadership in Police Organizations and 68th Session of the Police Executive Research Forum-Senior Management Institute for Police (SMIP) in Boston, MA.”

Wauwatosa released this bio for Salazar.

“Captain Salazar was appointed to the Milwaukee Police Department in 1996 and served as a patrol officer in the Seventh District until his promotion to Detective in 2001. As a Detective he worked in the Robbery Division and later in the Homicide Division. From 2009 through 2013, he served as a Lieutenant in the Criminal Investigation Bureau and in the Internal Affairs Division.