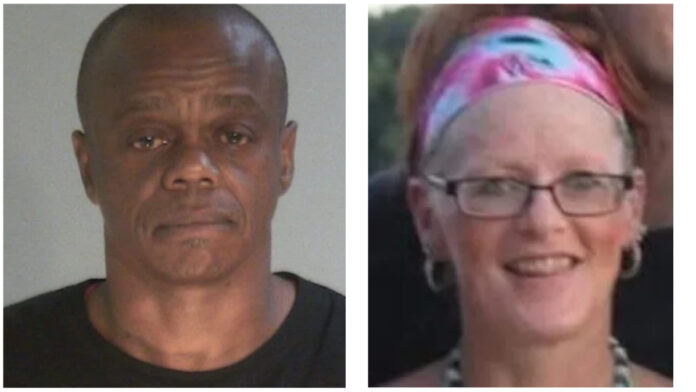 Fond du Lac County District Attorney Eric Toney has charged Gary Eugene Davis with the domestic violence murder of Jacquelyn Jo Rooney, 51. The victim died from over 12 stab wounds to the torso, three skull fractures from blunt force trauma and blunt force trauma to her jaw “which broke her upper jaw off.”

The criminal complaint says that Davis, 57, is from Fond du Lac, Wisconsin, and he was dating Rooney. He is also known as Gary E. Davis. Davis was charged with first-degree intentional homicide with use of a dangerous weapon as well as mayhem and hiding a corpse. He is a repeater because he was previously convicted of Felony Intimidate Victim/Threaten Force – Domestic Abuse.

Bail was set at $2 million, according to online court records.

“She was born on January 27, 1971, in Fond du Lac, the daughter of Warren and Sharon (Hoch) White,” Rooney’s obituary reads. “Jackie was a 1989 graduate of Laconia High School. She was a loving, caring, free spirit who loved animals, especially her three cats, Cleo, Gracie and Ada. Jackie was proud to be a mom and grandmother. She loved her family dearly.”

According to the criminal complaint against Gary Eugene Davis:

On Nov. 12, 2022 at 8:15 a.m., Officers Provot and Utpadel of the City of Fond du Lac Police Department were dispatched to 70 E. Merrill Avenue Apartment #4 in the City and County of Fond du Lac, Wisconsin “for a welfare check on Victim 1. The caller was from the methadone clinic in Fond du Lac County and stated that Victim 1 had not been to clinic for three days.” The victim was identified in other news reports as Jacquelyn Jo Rooney.

At the apartment, the officer found the victim lying deceased on the floor with blood near her body. She was “covered with items,” such as blankets and “debris.” She had a hole in her side.

“Detective Meilahn arrived to the scene and spoke with Officer Provot and learned that Victim 1 was dating Gary Davis and that Davis lived in the same apartment building,” the complaint said.

A glass crack pipe was found on a table top.

The complaint says there was blood spatter throughout the house.

Shoes with blood were found at the scene and matched shoes worn by Davis in surveillance video obtained by detectives.

Authorities “observed what appeared to be numerous penetrating knife wounds to her body as well as some type of trauma to her head, behind her left ear. Detective Meilahn also observed apparent defensive wounds to the Victim’s hands,” the complaint says.

Davis claimed he was calling the victim but her phone wasn’t accepting calls. He denied leaving his room.

“Gary Davis also originally told Detective Meilahn that he had no idea how the Victim’s car got to the Somewhere Bar parking lot, despite video surveillance showing Gary Davis being the person that put the vehicle in the parking lot, and this would have Gary Davis leaving his apartment prior to his 7:30 A.M. work shift on November 9, 2022,” the complaint says.

The complaint noted: “Detective Meilahn noted Gary appeared to be untruthful regarding a prior incident at a Kwik Trip with the Victim. Detective Meilahn additionally noted that after Gary last said he spoke with the Victim there were 3 additional phone calls between them. Gary stated he wasn’t aware of anyone else having a key to the Victim’s apartment. Gary Davis also denied knowing how the Victim’s vehicle got to the Somewhere Bar parking lot.”

He later admitted the bloody shoes belonged to him, the complaint says, and admitted he did in fact move the victim’s car.

The complaint also notes that the victim was breaking up with Davis because of his “controlling behavior.”

The Victim was heard crying and stated “I’m so sick of this” as well as “I can’t take this anymore” and “All we do is
argue.”

“Detective Henning also spoke with WITNESS 4 on November 15, 2022. WITNESS 4 stated that Gary Davis and the Victim fought all the time and that Davis had given the Victim black eyes and had choked her in the past. WITNESS 4 also stated while at 70 E. Merrill Ave WITNESS 4 could hear Gary Davis ‘throwing’ the victim around,” the complaint said.