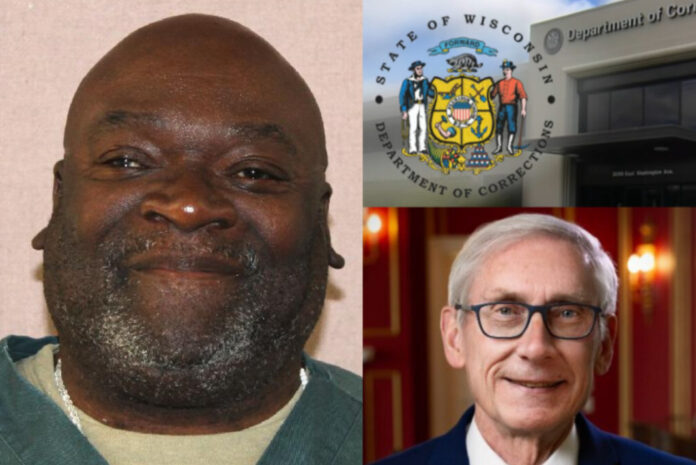 An Appleton man who was paroled this June by Gov. Tony Evers’ appointee after serving just 23 years of an 82-year sentence for a violent rape and false imprisonment conviction is already back behind bars for attempting to commit an eerily similar crime.

Kenneth Moffett, 58 was charged on September 23, 2022, with one count of strangulation and suffocation, and one count of false Imprisonment, both felonies, according to a criminal complaint obtained by Wisconsin Right Now from Outagamie County. The crime is almost a mirror image of the rape he was convicted of in 1998.

According to WI DOC records, Moffett was paroled on June 7th of this year after serving 23 years of an 82-year sentence. His mandatory release date was in 2053. He was an old law inmate, and the parole was discretionary.

WRN has reported that, since 2019, Gov. Tony Evers’ Parole Commission has released hundreds of convicted criminals, freeing them early on parole mostly into Wisconsin communities, including more than 300 murderers and attempted murderers, and more than 47 child rapists.

Moffett is not the only paroled criminal to have reoffended. We found 16 killers and attempted killers who had reoffended or are back behind bars on correction holds since their discretionary paroles.

According to the criminal complaint filed last month, the victim went to Moffett’s home with him and two other friends. While the friends were in a back bedroom, the victim had attempted to leave, when Moffett grabbed her by the neck with both hands causing her airway to become restricted as Moffett was pushing on the front of her neck, choking her.

Moffett pushed her backward from the kitchen down a hallway towards the back bedroom. The victim stated she was yelling for Moffett to stop and he did not. Moffett told her to be quiet. A struggle ensued which resulted in Moffett falling on top of her. At that point, the two friends heard the commotion and got Moffett off of her, the complaint says.

Kenneth Moffett has been charged with one count of strangulation and suffocation, and one count of false imprisonment.

You can read the criminal complaint here:

The criminal complaint from 1998 paints similar circumstances but with a much worse outcome for the victim.

On July 28, 1998, Kenneth Moffett had lured a 20-year-old woman to his Appleton home where he locked her in his bedroom, choked her, and told her, “We’re gonna do this.” Moffett proceeded to brutally raped the woman several times, both vaginally and anally.

Moffett was convicted of four counts of 2nd-degree sexual assault and one count of false imprisonment for that crime. He was sentenced to 82 years in prison.