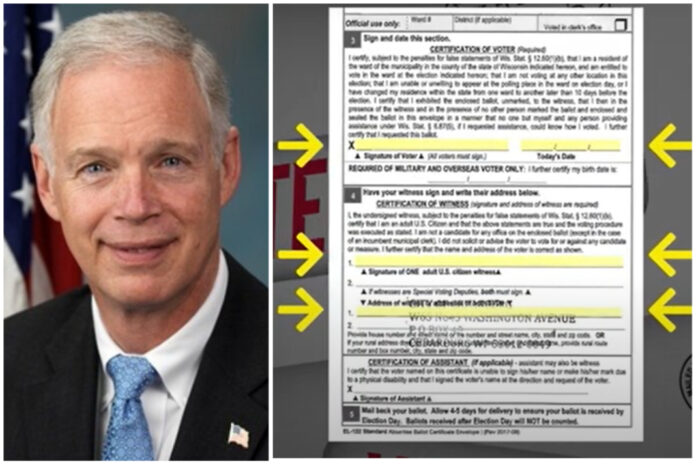 Senator Ron Johnson’s reelection campaign has taken steps to help assure voters that the 2022 elections will be secure and run in accordance with law.

According to a press release issued today, the campaign launched a website and video in time for the 2022 election that allows voters to report instances that they believe constitute violations of election laws.

Campaign attorneys will review those submissions to determine the next steps.

The campaign has also launched a video, “Securing Our Elections.”

The video will help Wisconsin election observers on the absentee ballot process and give Wisconsin voters faith in the integrity of our elections, according to the campaign.

“The initiative is in “partnership with the Republican Party of Wisconsin (RPW) and the Republican National Committee (RNC), conservatives in Wisconsin are investing in election integrity efforts to ensure the 2022 elections are free and fair.” the release said.

“Everyone in Wisconsin should have the assurance that their vote counts and it will not be canceled by a fraudulent vote,” said U.S. Senator Ron Johnson. “We are doing everything in our power in 2022 to restore confidence in our election by ensuring Wisconsin elections laws are fully complied with. We will continue to coordinate with the committees to make sure this election is free and fair, and that everyone can have full confidence in the final results.”

The release continued, “Republicans in Wisconsin and nationwide are focused on ensuring voters can have faith in the outcome of the 2022 elections. The RNC has worked with the RPW to hold over 280 election integrity trainings in Wisconsin, nominating a record high of over 5,000 election inspectors statewide and nearly 2,000 poll watchers. Republicans’ 2022 statewide voter integrity initiative is dwarfing previous efforts and will ensure eyes on ballots all across the state to ensure voter integrity in the November election.”