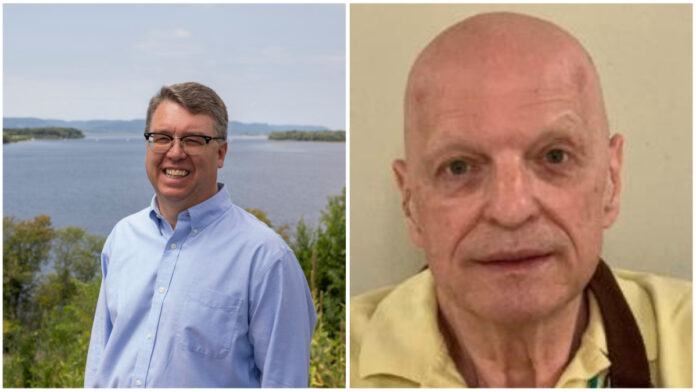 Democratic state Sen. Brad Pfaff, who is running for Congress, is refusing to condemn the discretionary parole of “meat hook” killer/rapist Terrance Shaw to his hometown of Onalaska, where Tony Evers’ Department of Corrections placed Shaw in a home operating as an unregistered daycare.

Even though the murder also occurred in his hometown, Pfaff (D-Onalaska), who is running against former Navy SEAL Derrick Van Orden for Congress, has been completely silent about the Shaw parole, refusing to condemn the release or the fact the state Department of Corrections admittedly placed Shaw in a home functioning as an unlicensed daycare. He did not respond to questions specifically asking whether he would do so.

Instead, Pfaff has been tweeting photos of himself with Evers at Oktoberfest in La Crosse.

Van Orden tweeted, “We also deserve to know why your colleague, @pfaff4congress, has been absolutely silent on the release of a rapist/ murderer back into his hometown without the next of kin or Police Chief being notified. Why is he afraid to speak truth to power and protect women and children?”

We sent Pfaff an email last week asking him about the Shaw case. We have received no response, and Pfaff has made no other public comment. We asked Pfaff:

Does Brad Pfaff agree with the parole of Terrance Shaw to Onalaska?
Does he agree with his placement in a home with a juvenile, unregistered daycare (per next door neighbor) and neighborhood full of kids?
The victim’s family wasn’t notified. His reaction to that?
Should the victim notification system be changed?
The Onalaska police chief didn’t know – his reaction?
Does he believe that Evers made the right decision appointing John Tate to the parole commission?
Is he concerned about the paroles Tate made of other killers?
What changes to the system are needed?
Does he still support the earned release and challenge incarceration programs considering 40% reoffended in two years? Does he want to expand or get rid of them?
Shaw is one of the most brutal killers in state history. He randomly broke into the home of Erickson, a nurse and young mother, in the 1980s and stabbed, strangled and raped her so violently he cut off a piece of his own thumb. He was found a year later prowling the home of another Onalaska med tech with meat hooks and rubber shoes in his car. The cop who caught Shaw believes he used the meat hooks to hike himself up the side of the woman’s house. That woman was unharmed, but Erickson died violently. The murder came on the heels of a series of attacks on other nurses/med techs in the La Crosse area, terrifying the community.
Evers’ parole commission has released hundreds of criminals in discretionary paroles, including brutal killers and rapists. We have been profiling a difference case each morning at 7 a.m.
Share
Facebook
Twitter
Pinterest
WhatsApp
Previous articleEvers’ DOC Admits Placing ‘Meat Hook Killer’ in Daycare, Moves Him to La Crosse Hotel
Next articleCHILD MOLESTER FREED: Richard Garcia Raped 2 Kids & Elderly Burglary Victim | Tony Evers’ Killers & Rapists #26