Gov. Evers, If You Disagreed With Parole Chairman Tate’s Decisions, Why Did You Reappoint Him AFTER Killers’ Releases? 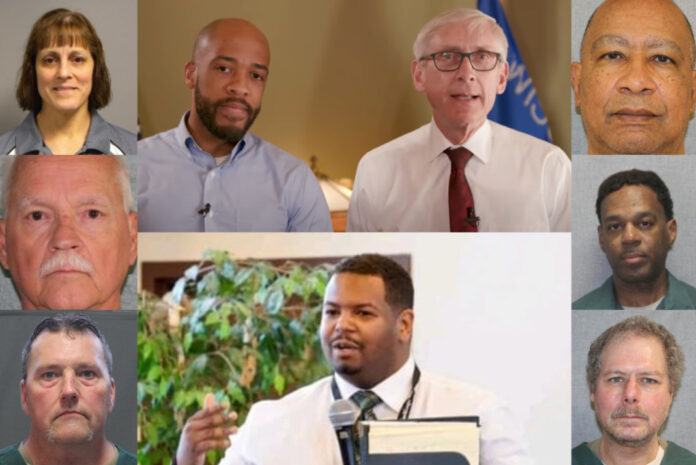 After nearly two weeks of dodging the issue, Gov. Tony Evers issued a terse, vague statement saying that he “disagreed” with some of his own Parole Commission chairman appointee’s decisions, without naming them. However, the fact is that Evers reappointed that chairman, John Tate, AFTER many heinous killers and rapists were freed, saying he was “pleased” to do so.

He did not explain why he reappointed Tate if he disagreed with his decisions, nor did he specify the cases he disagreed with. Evers has been completely silent on the fact his Parole Commission did not notify multiple victims’ families that the vicious killers of their loved ones were released.

For example, Evers, who first appointed Tate to begin serving in June 2019, remained silent for years and is still silent about the parole of wife murderer Carl Beletsky, who decapitated his wife and burned her head in a stove. Beletsky was released in August 2019 to Hatley, Wisconsin. Evers reappointed Tate two years later. That’s just one example. There are many more.

We have a challenge for Evers: Would he want his wife, kids or grandkids to live next door to Beletsky? Why should residents of Hatley have to do so?

There are many other horrific cases, as Wisconsin Right Now has been documenting in a daily series. Lt. Gov. Mandela Barnes, who was in a position of leadership in the Evers’ administration when the killers were released, has made no comment at all.

Evers could also have withdrawn Parole Commission Chairman John Tate’s nomination, he could have criticized the killers’ releases when they happened (in some cases years ago), he could have pressured Tate to quit or rescind the releases (as he did in another case under great pressure last spring), or he could have chosen someone without such a soft-on-crime philosophy in the first place. Evers failed to do any of those things.

This is the short quote that Evers’ office gave the La Crosse Tribune, which followed up on our story that exposed the release of Terrance Shaw, who broke into a La Crosse nurse’s Onalaska home, raped, stabbed, and strangled her in a vicious random attack. The victims’ sons did not know he was paroled, and he’s living back in Onalaska. The Onalaska chief did not know, either. It’s the governor’s first comment on the paroles.

“The governor disagreed with decisions made by the former Parole Commission chair, and that’s why he asked for the former chair’s resignation,” is all the statement said. No empathy for victims’ families, some of whom were not notified!

Evers did not ask for Tate’s resignation until June 2022 after we reported on the looming parole of wife killer Douglas Balsewicz.

A challenge to the Media

We challenge the media to ask Gov Evers and Lt Gov Barnes these questions.

Reminder: Both men are on record as saying they wanted to reduce the state’s prison population by 50%, and Barnes called doing so “sexy” a year before the killers’ releases began.

Here are the questions:

Which decisions did you “disagree” with, specifically?

Gov. Evers, if you “disagreed’ with John Tate’s decisions to release convicted killers and rapists, why did you reappoint him to the Parole Commission in 2021, writing that you were “pleased” to do so? (Mandela Barnes, do you think this reappointment was wrong?)

If you did not know he released these killers and rapists when you reappointed him, isn’t that incompetence? (Mandela Barnes, is it incompetence by Evers?)

Shouldn’t you take the time to understand how your Parole Commission chairman is affecting public safety before you reappoint him? These are VERY serious cases. Isn’t a reappointment a vote of confidence in how someone is doing their job?

If you disagreed over these decisions, why were you silent on them for years? (Mandela Barnes, why are you silent?)

Why were you “pleased” to reappoint Tate when he had already released so many killers and rapists into Wisconsin communities?

As you point out, under great pressure from us, the family, and the media, you eventually urged Tate to rescind the parole of convicted wife killer Douglas Balsewicz last spring. Why did you not do the same for these other killers? Did those cases not matter to you? They are just as severe, and the families are just as upset.

Multiple victims’ families said the state did not notify them of the paroles of their loved one’s killers. What is your response to this? How was this allowed to happen when state law says reasonable efforts must be made to notify family members? What changes are you making to ensure this does not happen again? Do you acknowledge this is a systemic failure that is unconscionable? (Mandela Barnes…what say you?)

Are you saying you disagreed with all of the releases of killers and rapists by the Parole Commission? Again, why did you not say anything then? How could this many violent killers be released for three years with complete silence by you?

Your actions in the Balsewicz case prove you do have the power to do something – minimally, use your bully pulpit. You also could have withdrawn Tate’s nomination. Why did you not do so in 2019, 2020, 2021, and through May 2022, allowing him to serve and continuing to release violent criminals?

Are you concerned that these releases are threatening public safety?

Would you want Terrance Shaw living next to your wife, kids or grandkids? Why is that OK for the people of Onalaska?

Do you condemn the release of Randolph Whiting, who helped gang rape and then slashed the throat of a woman in Green Bay and tossed her in a manure pit to die? Would you want him living next to your kids, grandkids and wife? Why should the residents of Waupaca have to live next to him? YOU REAPPOINTED TATE AFTER THIS RELEASE. WHY?

Do you condemn the release of Scott Jenkins, a sniper who murdered an elderly dog walker in Wauwatosa? Why have you been silent on this parole? Would you want Jenkins living next to your wife, kids and grandkids? Why should the residents of Milwaukee have to live next to Jenkins? YOU REAPPOINTED TATE AFTER THIS RELEASE. WHY?

Ryan Brucker shot his dad to death as the father watched television. Why have you been silent on this parole? Would you want Brucker living next to your wife, kids, and grandkids? Why should the residents of Marietta, Georgia, have to live next to Brucker? YOU REAPPOINTED TATE AFTER BRUCKER WAS FREED. WHY?

Norman Pepin executed two engineers who were in Milwaukee for a conference in an I-94 ditch. Why have you been silent on this parole? Would you want Pepin living next to your wife, kids, and grandkids? Why should the residents of Marietta, Georgia, have to live next to Pepin?

Lori Esker strangled a romantic rival to death with a belt. Why have you been silent on this parole? Would you want Esker living next to your wife, kids, and grandkids? Why should the residents of Racine have to live next to Esker? YOU REAPPOINTED TATE AFTER ESKER WAS FREED. WHY?

Carl Beletsky decapitated his wife after murdering her and burned her head in a wood burning stone. Why have you been silent on this parole? Would you want Beletsky living next to your wife, kids, and grandkids? Why should the residents of Hatley, Wisconsin, have to live next to Beletsky? YOU REAPPOINTED TATE AFTER BELETSKY WAS FREED. WHY?

Wilson Brook murdered a Burlington police sergeant, who was a father of two and World War II veteran. He was shot five times and Brook tried to push his body off a cliff. Why are you silent on this parole? Would you want Brook living next to your wife, kids, and grandkids? Although he’s now deceased, he was paroled in 2019 and lived through at least July 2021. YOU REAPPOINTED TATE AFTER BROOK WAS FREED. WHY?

James Block strangled his girlfriend, revived her and then asphyxiated her, screaming for her to die. Why have you been silent on this parole? Would you want Block to live next to your wife, kids and grandkids? Why should residents of Kenosha have to live next to Block? YOU REAPPOINTED TATE AFTER BLOCK’S RELEASE. WHY?

Mark Ketterhagen shot 16-year-old pregnant teen Cathy Ziebell and threw her body off a bridge. Why have you been silent on this parole? Why should residents of West Allis have to live next to Ketterhagen? Would you want your wife, kids or grandkids to live next to him? YOU REAPPOINTED TATE AFTER KETTERHAGEN’S RELEASE. WHY>

Robert Taliaferro stabbed his wife in the heart, killing her. Why have you been silent on this parole? Would you want Taliaferro living next to your wife, kids, and grandkids? Why should the residents of Blooming Prairie, Minnesota, have to live next to Taliaferro?

Danny Hall killed a 17-year-old gas station attendant over $5, shooting him in the head. He shot two other clerks that day for no reason. Why are you silent on this release? Do you condemn it? Would you want your wife, kids and grandkids to live next to Hall? Why should residents of Milwaukee have to live next to Hall? YOU REAPPOINTED TATE AFTER HALL’S RELEASE. WHY?