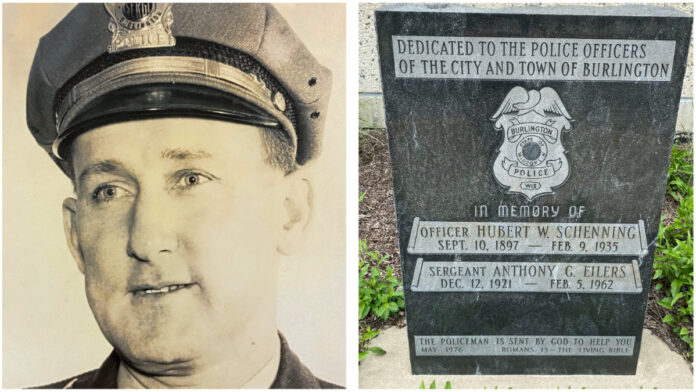 The victim’s son also did not know the cop killer was freed.

Burlington police did not know that Tony Evers’ Parole Commission freed the killer of a Burlington police officer until being informed of the release more than three years later by Wisconsin Right Now.

Asked if the Burlington Police Department knew of the parole, Police Chief Brian Zmudzinski said, “We were not, and to my knowledge, it sounds like it happened in 2019. To my knowledge, we were not notified of that release, and I don’t believe my predecessor was notified.”

The chief believes it’s an “egregious violation” and “complete letdown” that the slain officer’s own son didn’t know about the parole, either.

Although Brook is now deceased, according to the Department of Corrections, a family obit shows he lived until at least July 2021. It was not a compassionate release, according to commission records, and Brook, then 79, had already failed at parole twice. He murdered Eilers by shooting the officer five times in a routine traffic stop and then trying to push his squad car and body off a cliff.

Sgt. Eilers’ son, John Eilers, previously told Wisconsin Right Now that he did not know about the parole. Furthermore, he believes cop killers should never be released. “No, give them life in prison,” he said. “That’s not right.”

It’s part of a pattern of systemic failure to notify victims of paroles under the administration of Tony Evers and Mandela Barnes, even though state law says a reasonable effort to notify victims’ families must be made.

“My heart thoughts and prayers really go out to the son and daughter of Sgt. Eilers, with this decision coming from parole board and DOC,” said Chief Zmudzinski (center below).

He added that if victims’ families were “not notified or given the opportunity to engage with the parole board on not wanting him released with community, then they have done a disservice with those victims. That should be fixed.”

He noted that Eilers is one of two local officers killed in the line of duty.

“I am surprised to hear Wilson Brook was paroled,” the chief said.

“In hindsight, it would have been a nice courtesy from the parole board or DOC to notify us of that release,” he said.

“My understanding of release hearings is that there should be notification to those affected. They should have an opportunity to discuss those concerns prior to the hearings to review the merits of the release.”

He stressed, “More importantly certainly should have been notification to Sgt. Eilers’ children.”

If someone kills a cop, the chief believes, “their life and freedom removed. In exchange, they should live out remaining years in a cell block. What message is the parole board sending to the victims to allow (the killers) into communities again and potentially reoffend?”