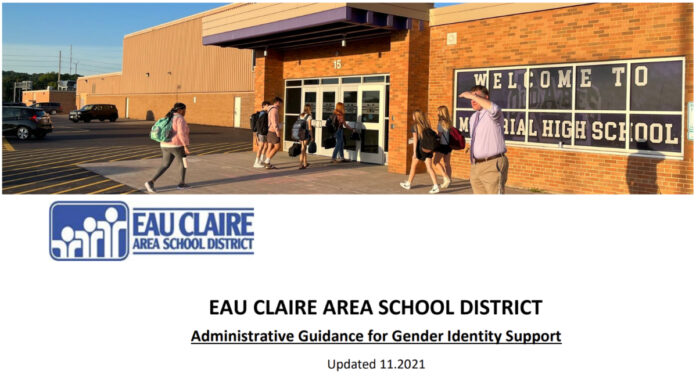 Eau Claire School District Gender Transition Lawsuit: One teacher, taking this policy to heart, posted a sign that said, “if your parents aren’t accepting of your identity, I’m your mom now,” the lawsuit says.

A local parents’ organization has filed a federal lawsuit against the Eau Claire Area School District, the superintendent, and the school board for adopting policies “that facilitate gender transitions that might occur at school without any parental notification or consent.”

According to a press release from WILL, Eau Claire Area School District staff underwent training on the policy that told staff that “parents are not entitled to know their kids’ identities,” but must “earn” that knowledge.

The parents’ group is represented by America First Legal (AFL) and the Wisconsin Institute for Law & Liberty (WILL).

“Students of any age can undergo a gender transition at school without parental consent or notification,” the press release from WILL states.

The press release includes these exhibits. One of them, an equity training guide for Eau Claire School District staff, says, “When the conversation turns to navigating parents’ faith-based rejection of their student’s queer identity, it’s critical to remember that we must not act as stand-ins for oppressive ideas/behaviors/attitudes, even and especially if that oppression is coming from parents.”

It adds: “Never forget that you may be the only supportive person in that student’s sphere. Guard and preserve that responsibility…White, cis-gender, heterosexual, middle class, Christian men and women without a
disability might find the conversations about identity to be uncomfortable.”

The lawsuit, filed in the U.S. District Court of Western Wisconsin, “urges the court to enjoin the school district from using the policy because it violates the state and federal constitutional rights of parents to direct the upbringing of their children,” the press release says.

“Policies like Eau Claire’s blatantly violate parents’ constitutional rights to raise their children. School staff do not replace parents while their children are at school,” WILL Deputy Counsel, Luke Berg, said. “A gender identity transition is a major event in a child’s life; schools must defer to parents about this.”

AFL President, Stephen Miller, stated, “Eau Claire schools have adopted a monstrous plan to secretly ‘change’ the genders of children as young as 5 — without parental consent — effectively subjecting them to unnatural ideological experiments contrary to their health and biology…. This revolutionary crusade to remake and reshape our children… must be extricated root and branch from our schools. America First Legal is leading the way in the fight to save our children from this lawless Marxist indoctrination.”

According to background provided by WILL, the Eau Claire Area School District “has adopted and trained its staff on a gender identity policy that enables minor students to change their gender identity at school, by adopting a new name and pronouns, and using opposite-sex facilities without parental notice or consent.”

In its training on this policy, the facilitator’s notes emphasize that “parents are not entitled to know their kids’ identities,” but must “earn” that knowledge, the press release says. “And religious objections from parents are, according to the facilitator’s notes, ‘weaponization of religion against queer people,'” it adds. “One teacher, taking this policy to heart, posted a sign that said, ‘if your parents aren’t accepting of your identity, I’m your mom now.'”

ECASD’s policy “not only violates parents’ well-established constitutional rights, it also runs directly counter to the advice of numerous medical professionals who recommend that health professionals defer to parents on this, given the serious, long-term implications of gender identity transitions during childhood,” according to the press release.

“America First Legal and WILL represent Parents Protecting Our Children, a local group of Eau Claire parents who have children in the Eau Claire Area School District. The lawsuit claims Eau Claire’s policy violates fundamental constitutionally recognized parental rights, including the right to make decisions concerning the care, custody, and control of their children,” it says.

The Eau Claire School District told WEAU-TV that it has “not had a chance to thoroughly review it. We have forwarded the complaint to our attorneys. They have recommended not discussing this matter or any matters that are currently in litigation.”