Eric Toney on Milwaukee Crime: ‘I Refuse to Accept This as the New Normal’ 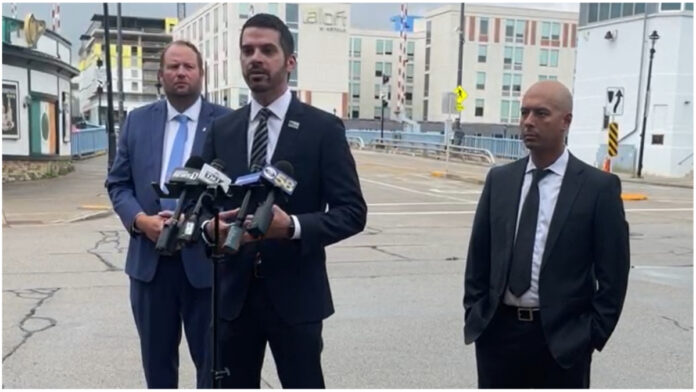 Republican Attorney General candidate Eric Toney said in Milwaukee on Tuesday that “I refuse to accept this as the new normal,” just days after a homicide suspect led police on a dangerous pursuit to Water Street and then shot at them.

“People are turning Milwaukee into a shooting gallery,” Toney said. “We had a shootout here in downtown Milwaukee. I refuse to accept this as the new normal. We need an attorney general who is going to make public safety their top priority… not just giving it lip service like Josh Kaul.”

Toney said that Democrat Kaul has left key criminal justice and prosecutor positions vacant for two years. “He is trying to balance his budget at the expense of public safety,” Toney said.

Toney, the Fond du Lac County District Attorney, also said that fentanyl is “destroying our communities” and the state needs an attorney general and governor who will “start taking public safety seriously. If we protect Milwaukee, we will protect all of Wisconsin.’

Toney is advocating that the State Department of Justice be given “original jurisdiction” to take on the crime that the Milwaukee County District Attorney is “unwilling to prosecute.”

He also wants legal changes so judges have to consider a criminal’s dangerousness when considering bail.

Wagner referenced the officer-involved shooting and pursuit of the homicide suspect that culminated in a barrage of gunfire on Water Street over the weekend and said: “Each day our officers see some of the most horrific incidents and have to deal with some of the most violent criminals. Each day we see them act with professionalism and courage. This was no different Friday night when they pursued a suspect out on bail and awaiting sentencing for the sexual assault of a child.” Milwaukee police shot and killed the suspect.

According to Wagner, police pursued the homicide suspect into the Water Street area. “The brave officers were then faced with a choice solely put onto them by this criminal,” he said. “He fired rounds in their direction, showing no regard for human life. The officers acted bravely and quickly.”

Every officer has seen an increase in violent crime, Wagner said. As staffing levels have fallen at MPD, crime has increased, he said. He said the district attorney’s office, Sheriff’s Department and prison system need to be properly staffed too.

“We need to move forward in state government with leaders who have a plan to fix the crime issue,” Wagner said.

“We need to make sure government puts the safety of their citizens as the top priority. We need leadership in Madison like Tim Michels and Eric Toney, who share our vision of a safer Milwaukee,” Wagner said.

Mark Sette, vice president of the Wisconsin Fraternal Order of Police, said, “We are here today unfortunately for another example of a horrific crime that happened perpetrated by a violent criminal that probably should have been behind bars.”

Sette stated that the “streets in our major metropolitan areas are lawless areas in the control of gangs and thugs who little or no fear of the law.”

He said that a “social experiment led to all of this. Liberal soft-on-crime policies got us to this place.” He listed bail reform, vilifying officers, defunding the police and policies that give more rights to criminals than victims.

“It’s a social experiment that failed miserably,” said Sette, adding that the Fraternal Order of Police was “proud to endorse Eric Toney as the leader we need as our next attorney general,” calling him a “tough-on-crime prosecutor” who will “put a stop to the lawlessness we are seeing throughout our state.”

Running social experiment led to all of this, liberal soft on crime policies got us to this place, bail reform policies, vilifying our officers, defunding the police, policies give more rights to victims

Toney said that it shouldn’t “tale a shooting here on Water Street” to get people’s attention on crime, noting that “Milwaukee is on pace for its third straight murder record.” He said he announced his candidacy in the City of Milwaukee because of crime.

“The attorney general turned his back on law enforcement in the wake of Jacob Blake,” Toney said, noting that he has bipartisan support from police chiefs, sheriffs and district attorneys (Kaul lists zero law enforcement endorsements.)

Toney said it is time to “turn the page.”

The reporters tried to hammer Toney with negative questions, but he answered them each directly. One reporter asked how original jurisdiction was “not government overreach,” and Toney responded that it was “adding resources to keep people safe.’

Rebecca Klopf, a reporter from WTMJ-TV, started to ask, “you were given a $500 cash bail…you saw a $500 cash bail lead to a firefighter’s death,” but Toney interjected. She is referring to the Ruben Houston case, the media reporting over which we have already debunked.

Another journalist asked whether Toney would support the state Legislature giving Milwaukee more shared revenue. He responds, “The attorney general doesn’t have the authority to give money.” He said that the governor has the ability with COVID-19 funds to give more money to Milwaukee now but he is “not doing it.”