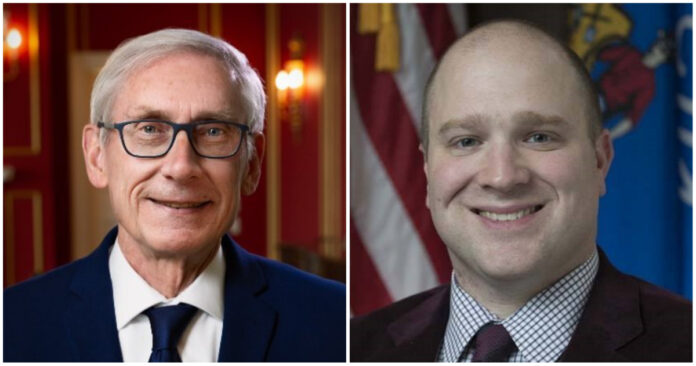 “Once again, however, the incompetence of the Backlog Bureaucrat in Chief comes to fruition as he fails to address another major issue in this state” – state Rep. Shae Sortwell on Evers.

Gov. Tony Evers and others have been accused in a Brown County lawsuit of violating the civil rights of Wisconsinites, causing a “Constitutional crisis,” due to systemic public defender backlogs. Some people accused of crimes have sat in jail for more than 100 days without a lawyer as statewide criminal case backlogs reach 35,000 cases, the suit says.

“Just a year ago, my colleagues and I sent a non-partisan letter to the governor’s office requesting him to send ARPA funds to Brown County and aid the public defender crisis. The effects of COVID-19 on the Wisconsin Court System was exacerbating an ongoing backlog of cases among the public defenders in the county,” Sortwell said in an Aug. 26, 2022, statement. “The State Public Defender Office requested similar assistance weeks prior and asked for our support.”

He added: “Once again, however, the incompetence of the Backlog Bureaucrat in Chief comes to fruition as he fails to address another major issue in this state, similar to the delays within the Departments of Workforce Development (DWD) and Safety and Professional Services (DSPS). Add justice to the list of unemployment aid and healthcare licenses he has neglected.”

According to Shae Sortwell: “As our absentee governor violates the Constitution, our court system continues to be bogged down so justice cannot be achieved. We warned him, and he fails, yet again.”

According to the lawsuit, the United States Constitution and the Wisconsin Constitution “guarantee that people accused of crimes have the right to the assistance of an attorney for their defense. The United States Supreme Court has recognized that this right to counsel is ‘a bedrock principle’ that constitutes the very ‘foundation for our adversary system’ of criminal justice.”

The United States Constitution and the Wisconsin Constitution “require Wisconsin to appoint counsel to indigent defendants within a reasonable time after the defendant’s initial appearance,” it reads. Furthermore, the Wisconsin Legislature “passed a set of laws that were supposed to ‘provide for a prompt determination of indigency and appointment of a public defender.'” The Wisconsin Supreme Court has “condemned” delays of longer than 10-14 days.

It notes that Defendant Kelli Thompson, the Wisconsin State Public Defender, recently acknowledged that “many indigent criminal defendants languish in jail waiting for legal representation,” quoting her as saying, “We have individuals sitting in custody waiting for their day in court. We have individuals whose family members are impacted because they’re not home with their families.”

She called it a “statewide problem” and “admitted that it will take years to clear a backlog of roughly 35,000 cases,” the lawsuit says.

“While this is a statewide problem impacting indigent defendants across Wisconsin, the problem is especially acute in Brown County, where the County Board of Supervisors had to pass a resolution in 2021 calling on the Governor and Legislature to take action to address a backlog of criminal cases because, at the time, there were ‘approximately 350 defendants in Brown County which currently need SPD representation, 17 of which have been in custody and sought representation for over 100 days,'” the lawsuit says.

The lawsuit asks that the court “certify a class of current and future indigent defendants who have not received or do not receive appointed counsel within 14 days after their initial appearances, and enter an Order (1) requiring Defendants to immediately appoint counsel for the class members or, (2) if timely appointment of counsel is not feasible, dismissing the class members’ cases with prejudice.”

The people filing the lawsuit include:

“Plaintiff Antrell Thomas is a resident of La Crosse, Wisconsin. His cases are pending in La Crosse County. Mr. Thomas’s initial appearance occurred on August 26, 2021. Mr. Thomas is being detained in the La Crosse County Jail and has been waiting for an appointed attorney for nearly a year since his initial appearance. He qualifies for an appointed attorney but has not received one.