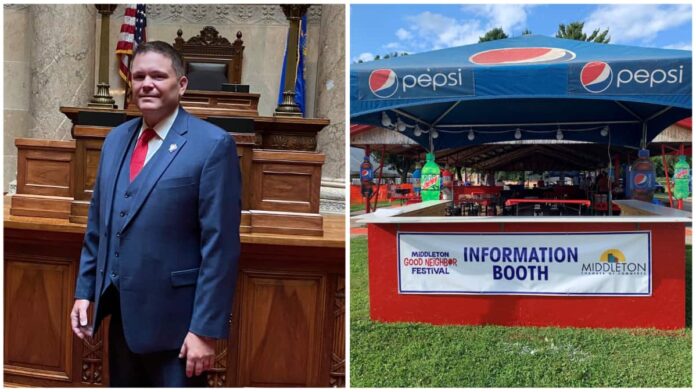 Under fire for refusing to allow a Republican challenger to be in the Middleton Good Neighbor Parade, its organizers, after initially digging in their heels, have decided to ban all politicians.

They could have just allowed Robert Relph, the Republican candidate for state Senate, participate. His Democratic opponent, Dianne Hesselbein, was allowed in the parade.

Relph and Democrat Dianne Hesselbein are running for election to the Wisconsin State Senate to represent District 27.

On Aug. 21, Relph wrote, “CALL TO ACTION: Next weekend the Relph for Senate Campaign needs all your help. The Middleton Good Neighbor Fest DENIED me from being in the parade next Sunday. However they are allowing my opponent to be in the parade. They told me incumbents only! My opponent is not an incumbent. After a string of emails and a phone conversation with the Mayor of Middleton, they still are standing firm and not allowing me in. They did say I can however walk along and hand out literature. So I need all your help! Anybody that can attend the parade starts at noon on Sunday. Please reach out to me and let me know if you can help. Whoever can help I will give a T-Shirt to. This is wrong and I will not sit back and allow favoritism to the left. Thank you so much please reach out so I can plan. I appreciate your help! Robert.”

The festival’s counter argument had been that they allow incumbent politicians, but not candidates, to be in the parade, and Hesselbein is currently a state rep. But she’s not an incumbent in the senate race. The problem with the festival’s argument is that, because it’s largely a Democratic area, allowing only incumbents helps keep Democrats in office by blocking Republican challengers from getting the exposure they need to make their case to voters.

In a post on Facebook on Aug. 23, 2022, after days of heated criticism, the festival wrote that it had changed its mind: “For decades, the Good Neighbor Festival’s policy has been to welcome elected officials who currently serve Middleton to participate in the annual community parade as long as they do not engage in campaigning. Given recent circumstances and ongoing statements being made on social media, the festival’s Executive Committee has concluded that it is in the best interest for the safety and enjoyment of all parade participants and attendees not to include any politicians (both elected officials and candidates) in the 2022 parade.”

The day before, the festival doubled down on its decision not to let the Republican candidate participate.

“The Middleton Good Neighbor Festival has never been about politics,” they wrote.

“Suddenly, after 59 years we are being accused of applying political bias in who we allow in the parade. To be clear, we have always allowed our elected representatives in the parade. They are never allowed to campaign. We also don’t invite politicians, so if anyone could be so kind as to let Ron Johnson know that we’d love to have him, that’d be great. (Please tell the honorable Senator Johnson that he cannot campaign while in the parade. Thx!)”

They noted, “We should add that the deadline was passed weeks ago without Senator Johnson indicating interest. If he acts with all due haste, we ought to be able to get him in.”

Relph wrote in an email that Democrat Alex Joers’ attendance was also an issue, in addition to Hesselbein’s, saying, “They both are running for a different office. So they are no different then myself. That is only fair. Going by YOUR rules. Unless you are purposely singling me out which would not look good in the media which I will contact. I think this is only fair. My father taught at Middleton high school for 46 years. My family has been connected to Middleton for many years. I was a firefighter fighter in Cross Plains and worked with the Middleton fire Department closely for years. I just am hoping this was a mistake and not purposely rejecting my entry. I look forward to your response.”

Joers is a Dane County Board supervisor running as a Democrat for state Assembly. He is running against Republican Victoria Fueger.

Anthony Hamilton, who is running for Dane County Sheriff, wrote of the festival’s ultimate decision, “With voters and candidates of all kinds, I believe that this is a fair resolution. All candidates or no candidates, it’s equal treatment either way. I support their decision.”

He added, “Also, some screen shots were shared with me this morning of people saying that they wanted to join in the parade anyway, openly armed. Let me be very clear. Those people do not represent me.”

Hamilton, a detective in the Dane County Sheriff’s Department, had initially criticized the decision not to let Relph in the parade, writing, “Last week I went on Vicki McKenna’s radio show and said that the GNF Parade is not allowing any Republicans to walk in the parade. This is a fact.”