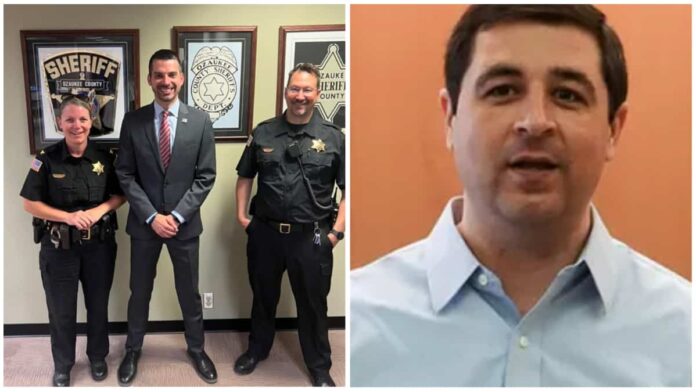 “Josh Kaul is desperately trying to deflect from the fact Milwaukee is about to set another record for murders during his tenure and at the same time he’s gutted the number of criminal prosecutors at the DOJ” – Eric Toney.

Republican candidate for Attorney General Eric Toney has called out Democratic AG Josh Kaul’s campaign for lying about a criminal case, revealing that, in doing so, they unwittingly blasted Kaul’s “own DOJ staff.”

In other words, Kaul’s campaign has resorted to trashing – and lying about – Kaul’s own employee.

In a news release on Aug. 12, 2022, Toney criticized Kaul’s “desperate campaign,” saying the Democrat “began the general election with a whopper of lie against Fond du Lac District Attorney Eric Toney regarding the Ruben Houston case.”

He added, “In a bizarre twist, Kaul hired the Assistant District Attorney that handled the Houston case and now works for Kaul at the Department of Justice.”

Said Toney: “Josh Kaul is desperately trying to deflect from the fact Milwaukee is about to set another record for murders during his tenure and at the same time he’s gutted the number of criminal prosecutors at the DOJ. Kaul has stood by while criminals are literally getting away with murder.”

Toney released these facts of the Ruben Houston case:

“It’s shocking that Josh Kaul doesn’t understand that courts set bail and not prosecutors. It demonstrates his inexperience in having never personally prosecuted a case in Wisconsin,” Toney said.“While Josh Kaul was lying about my record this week, I was prosecuting an intentional homicide jury trial during the primary election, which is the third murder trial I’ve done during this campaign, said District Attorney Toney.

“I’m law enforcement’s choice for attorney general because I hold criminals accountable and have the back of cops, which is in stark contrast to Kaul’s soft on crime approach of defunding DCI police positions and prosecutors from our department of Justice and mismanaging our crime labs.”

“Back in 2019, Toney’s office gave $500 bail to a nine-time felon who would go on to kill a firefighter during a shootout with police, said Sondra Milkie, Kaul’s campaign manager.”

In addition to the points Toney raised above, DA’s don’t have the power to give anyone bail in Wisconsin. Furthermore, the media are refusing to tell people that Kaul hired the assistant prosecutor in the case, who, as Toney noted and transcripts prove, opposed a defense bail modification request for a signature bond in the case. It’s the judge who came up with $500 bail. Furthermore, the defendant was not released on the streets by Fond du Lac County. He was transferred to the custody of Marathon County, which later released him on a different case.