Michels Speaks to ‘Hardworking Taxpayers…Left Behind by the Democratic Party’ 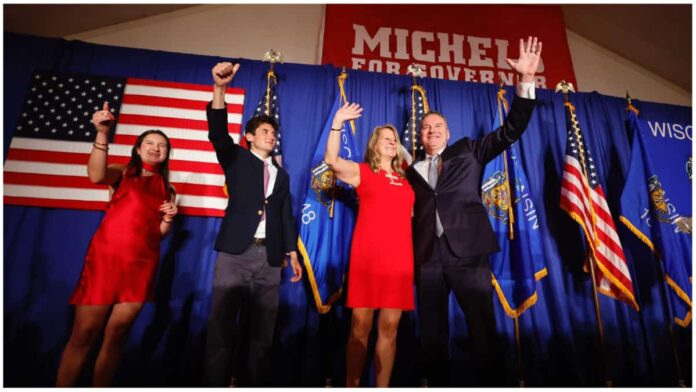 Businessman Tim Michels defeated former Lt. Gov. Rebecca Kleefisch for the chance to take on Gov. Tony Evers in the November election. Michels wasted no time in trying to reach across the aisle, saying that “hardworking taxpayers” have “been left behind by the Democratic Party, which just wants to focus on the social issues.”

In his victory speech, Michels said he wants to reach across the aisle to Democrats. His focus on “hardworking taxpayers,” evoked themes similar to former President Donald Trump, who spoke of the “forgotten man.”

The vote totals were:

Michels touted his endorsement from Trump, who flew into Waukesha County for a last-minute rally for the co-owner of Michels Corp., which is headquartered in Brownsville, Wisconsin.

“He knows that we need to have new leadership in Madison, and he sees a lot of similarities,” Michels said of Trump. “He wanted to drain the swamp and we found out it’s a really big swamp.”

“I have never seen a harder working more dedicated team of activists than the one here tonight,” she said, before adding, “I’ve conceded this race to Tim Michels, and I urge you all to stay in the fight because the fight now is truly against Tony Evers and the liberals who want to take away our way of life. Hard work still does matter, particularly in our local races. Let’s keep winning, and let’s beat Tony Evers this fall.”

Michels carried most of the state. Kleefisch won some populous areas, notably Waukesha, Ozaukee, and Brown Counties. However, Michels won most of the other counties. As with Trump, he performed strongly in rural areas and was able to offset Kleefisch’s stronger performance in the suburban counties around Milwaukee. However, Michels traded Brown for Washington, defeating Kleefisch in the last “W” in the “WOW” counties. Scott Walker historically won by driving up large margins in the WOW. Michels’ road to victory evoked that of Trump – a path through rural Wisconsin and the Valley to victory.

Following Tim Michels’ victory in the Republican primary for Governor, the Republican Party of Wisconsin released the following statement from Chairman Paul Farrow:

“The Republican Party of Wisconsin is excited to congratulate Tim Michels, whose experience as a business leader, builder, and veteran will serve him well in the Governor’s Office. We also thank Rebecca Kleefisch, Tim Ramthun, and Adam Fischer for bringing their passion for Wisconsin and their voices to the race. Unlike the Democrats, who didn’t trust their primary voters and pressured their candidates to fall in line, we are grateful that Republican voters were able to make their own informed choices thanks to our candidates’ willingness to step up to the plate and bring their unique perspectives to the table.

“The failed leadership of Tony Evers is evident as he worked to hike taxes, let Kenosha burn, put violent criminals back on the streets, kept schools closed, and rendered our state government dysfunctional. Wisconsin can’t afford four more years of his absent leadership, and we look forward to uniting the GOP coalition to elect Tim Michels this November.”

“The RGA is excited to congratulate Tim Michels on winning Wisconsin’s Republican primary election for governor,” said RGA Co-Chairs Governors Doug Ducey and Pete Ricketts. “As a successful businessman and job creator, Michels has what it takes to get Wisconsin back on track and the local economy moving again. Under Governor Evers’ failed leadership, violent crime is surging, paychecks don’t go as far, and businesses are under constant threat of bad policies. The RGA looks forward to working closely with the Michels campaign to ensure Evers is defeated in November.”