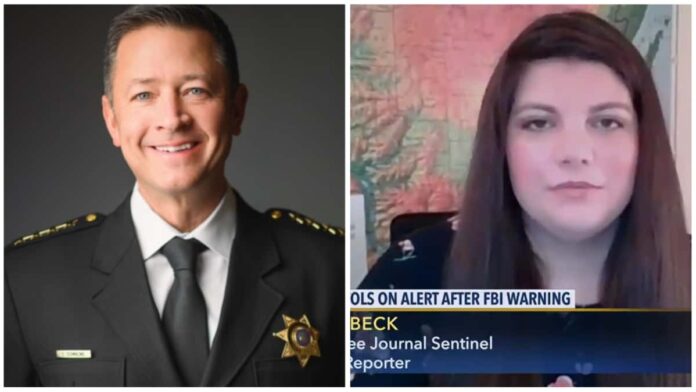 It’s not true that Sheriff Schmaling did not want an investigation in the online voting controversy. The reporters – Molly Beck and Corrine Hess – had to know that. It was in his first press release.

The Journal Sentinel is upset that Schmaling initially put more emphasis on his concern over exposed vulnerabilities in the state’s online balloting system than on running out to immediately arrest the citizen who exposed the vulnerabilities at a county fairground.

That citizen had requested other people’s ballots to show the flaws in the system but did not actually vote with them.

The reporters also made false claims that Schmaling wasn’t willing to investigate the matter when his FIRST PRESS RELEASE, which was written before their story, clearly stated that he had already contacted the Attorney General’s office for a full, statewide investigation (the AG is now investigating. The AG was needed to investigate because the citizens’ actions spanned multiple counties, as does the voting database, and Schmaling only has jurisdiction in one).

“Based upon this serious threat to voter integrity, the Sheriff’s Office has contacted the Wisconsin Attorney General’s Office and the Wisconsin Elections Commission,” the sheriff’s first press release read at 4:09 p.m. on July 27, 2022. “…based upon the concerns of the community, the Sheriff’s Office is requesting a full, state-wide, investigation into this voter integrity issue by the Attorney General’s Office and the Wisconsin Election Commission to ensure the voting process is secure and that appropriate safeguards are in place.”

The Journal Sentinel story accusing Schmaling of not being interested in an investigation was published the next day. The newspaper’s headline read: “After residents commit voter fraud to make a point, Racine sheriff seeks to end online ballot requests instead of an investigation.” Actually, Schmaling was concerned about the online balloting system’s vulnerabilities for fraud (see how semantics make a difference?)

How could they write this when his press release, which they had, literally called for an investigation?

Although we think the citizens could have handled their concerns differently, it’s interesting how little concern the Journal Sentinel reporters have for the exposed flaws in the voting system. They shape their story to basically sneer at such concerns, acting like it’s egregious to care about them, fixating instead on the citizens who exposed them, even labeling them “offenders” and making it clear they believe Schmaling was severely negligent for not immediately rushing to a county fair to slap handcuffs on them (even though that’s not how he handled other voter fraud allegations against Democrats, either).

The journalists rushed to judgment by outright saying the citizens committed voter fraud crimes in their stories, removing their presumption of innocence, which should instead be determined with a careful interpretation of the law (does intent matter?) by prosecutors, not newspaper reporters.

The original story ASSUMED that Schmaling was opposed to an investigation without revealing that he had already said in a press release that he had requested a full investigation into the situation. In fact, that seems to be the entire thrust of the story. Beck and Hess say the sheriff did not respond to a request for comment on that question but they also write, in paragraph one, that he blamed state election officials “instead of pursuing charges against the offenders.” Again, the “offenders” were concerned citizens who were trying to highlight problems in the state’s online voting system – not actually cast illegal votes. This nuance doesn’t seem to even occur to the Journal Sentinel reporters.

Buried 19 paragraphs down, they write, “A spokesman for the sheriff’s office did not answer whether they would investigate individuals who purposefully requested ballots for others.” Notice how they are trying to parse words? The sheriff had already asked for a “full” investigation at that point; that presumably would not rule out also investigating the individuals.

Sure enough, the very next day, Schmaling announced that the state Department of Justice was investigating the matter – again, at his request.

In its second story, on the DOJ investigation, the newspaper also left out the fact that Schmaling had requested the investigation.

The second Journal Sentinel story, written solely by Molly Beck, then shifted its language against Schmaling. Now she wrote that the sheriff “blamed state elections officials for the violations instead of arresting the offenders who had confessed to the crimes.” Well, he didn’t go arrest members of the Wisconsin Election Commission either before investigating and referring felony charges against them. Furthermore, note to the Journal Sentinel: It takes more than a few days to investigate a person, generally.

Beck also trashed Schmaling for initially not “promising to investigate the crimes.” But his own press release had stated he asked the AG for a full investigation of the entire matter!

In the Journal Sentinel’s original story, the first paragraph also claimed that Schmaling “has campaigned for former President Donald Trump and has spread baseless claims of widespread voter fraud.”

First of all, in this context, who cares if Schmaling voted for Trump? The online voting in question deals with the 2022 August and fall elections, so why is Schmaling’s voting history relevant? Does the Journal Sentinel remind readers that Josh Kaul voted for Joe Biden in every story?

As for supposed baseless claims, Schmaling is one of the most aggressive investigators in the state when it comes to voter fraud. Far from “baseless,” he painstakingly documented how the Wisconsin Election Commission allegedly operated above the law in how it gave voting guidance in nursing homes. Interestingly, when Democrat AG Josh Kaul – who voted for Joe Biden – refused to investigate that, the Journal Sentinel did not write a story trashing him for refusing to investigate. He actually did refuse to investigate.

Got that? Hess and Beck did not write a similarly sneeringly negative story accusing Kaul, a Joe Biden supporter, for refusing to investigate voter fraud concerns documented and raised by…Schmaling.

In addition, other district attorneys agreed with Schmaling’s concerns about WEC and nursing homes, they just did not have jurisdiction to prosecute. The Fond du lac County DA says nursing home officials there relied on the same guidance, so maybe something occurring in Fond du Lac AND Racine means it’s widespread? The guidance went to clerks throughout the state. Furthermore, Kaul, a Joe Biden donor, refused to investigate the issue on a statewide-basis.

Beck and Hess use the verb “spreads” to make Schmaling sound like a reckless conspiracy theorist when actually he presented the documented nursing home claims in a detailed presentation and press conference. Words matter, and Beck and Hess know exactly the kind of narrative they’re trying to shape here.

The reporters called the recent incident in Racine a “successful plot to commit voter fraud.” Again, they use phraseology to shape a biased narrative. They could have written that the incident was a “successful effort to demonstrate the potential for widespread voter fraud in Wisconsin’s online voting system.” Again, we’re not defending the citizens tactics in seeking another person’s ballot. The citizens could have brought their concerns to law enforcement first instead, and let them test it. But intent also matters, and wording does too.

Beck and Hess then wrote this word salad: “Members of a Racine County-based group that promotes false claims of voter fraud in the 2020 election committed election crimes by submitting false information to obtain absentee ballots…”

Was there voter fraud in the 2020 election? The state Supreme Court just issued a decision saying that dropboxes, which were widespread in the 2020 election, are not allowed under state law, and, as noted, Schmaling documented how the WEC allegedly operated above the law when providing guidance to nursing homes. Minimally, this is debatable. Furthermore, Republican AG candidate Eric Toney prosecuted cases of voter fraud stemming from the 2020 election. One man voted in Fond du Lac County when he actually lived in another county.

The Journal Sentinel reporters sneered, “Instead of promising to investigate the crimes, Schmaling publicized the plot on social media as being helpful in rooting out vulnerabilities in the state election system and blamed the Wisconsin Elections Commission…”

Schmaling “publicized the plot on social media”? He released an official press release, as many law enforcement agencies do, on the department’s official Facebook page. And, yes, he expressed concern that the citizens had unearthed vulnerabilities in the voting system because they were able to actually obtain Robin Vos’s ballot.

The reporters quoted the man behind their self-described “plot” as saying, “Basically, I committed a crime when I ordered them. I emailed Sheriff Schmaling, asked if he was going to arrest me and he said ‘hell no.”

Sheriff Schmaling later explained, “Criminal arrests, where police physically place a citizen in handcuffs, are made after thorough investigations and the formulation of probable cause. Criminal arrests are not based upon late-night Emails and requests to be arrested. Furthermore, in a previous election integrity investigation, where violations of the same Election Fraud statutes were considered (Wis. Stat. § 12.13), after a thorough investigation, the suspects were not physically arrested; instead, referrals were made to the District Attorney’s Office.”

Schmaling noted: “Sheriff Schmaling understands Wait’s passion and commitment to honest, open, and transparent government, especially as it pertains to elections; however, he never gave Wait permission or consent for Wait’s actions. Sheriff Schmaling does not condone any violation of the law. Instead, Sheriff Schmaling believes in holding people accountable when they violate the law.”

The reporters hilariously quoted WEC’s Ann Jacobs, who supported Joe Biden, as waxing on about voter fraud. Schmaling referred felony charges against her relating to the election. Racine County District Attorney Patricia Hanson later agreed with Schmaling, writing, “It is appalling to me that an appointed, unelected group of volunteers, has enough authority to change how some of our most vulnerable citizens access voting.” She added: “I am of the opinion that the WEC exceeded any authority granted to it by the legislature.” She just did not have jurisdiction to prosecute. They leave Hanson’s analysis out of the story, of course.

Come to think of it, why didn’t Beck and Hess tell readers that Jacobs supported Joe Biden?

Do better. Your bias is showing.