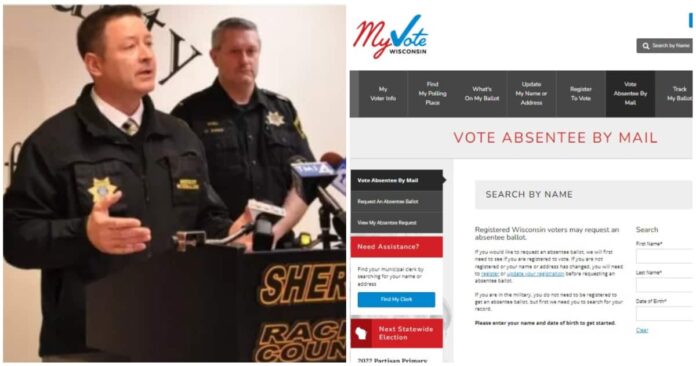 The Racine County Sheriff’s Office is calling for the immediate suspension of an online absentee ballot function within the state’s website “My Vote Wisconsin.”

According to a statement put out by the sheriff’s office, they had been contacted by complainants who have reported apparent vulnerabilities that could lead to fraudulent voting within the My Vote Wisconsin website.

“With only a person’s name and date of birth, anyone can request another person’s ballot and have that ballot sent to any address entered. No photo identification is needed, and the requester can make a declaration of being indefinitely confined – thus, for the current and future elections, the requestor will be sent someone else’s ballot at the different address entered,” the Sheriff’s Department wrote in a July 27, 2022, news release.

The statement continued, “One complainant tested this vulnerability and had a second party request their ballot and had that ballot sent to the second party’s address. The second party was successful in obtaining the first party’s ballot. Another complainant requested the ballot of two prominent government officials and numerous individuals from around the state. This complainant reported he was successful in ordering these ballots be sent to the complainant’s home because he knew these individuals’ dates of birth and without showing any form of photo identification.”

Racine County Sheriff Christopher Schmaling stated, “I am disheartened by the apparent vulnerabilities in My Vote Wisconsin that are ripe for fraud, and everyone – no matter their political leanings – should join in requesting a thorough, state-wide, investigation into this significant election integrity issue.”

The Sheriff’s Office is calling for the immediate suspension of the function within My Vote Wisconsin where a person can request another’s absentee ballot and have it mailed to a different address, with or without showing any proper photo identification.

The Sheriff’s Office is calling for the immediate suspension of the function allowing for the declaration of being indefinitely confined, which allows for ballots to be sent to different addresses for “All future elections.”

The Sheriff’s Office is also requesting a full, state-wide, investigation into this voter integrity issue by the Attorney General’s Office and the Wisconsin Election Commission to ensure the voting process is secure and that appropriate safeguards are in place.

To determine if there was any fraudulent activity associated with your or anyone else’s voting history, go to My Vote Wisconsin and enter a valid name and date of birth to see that person’s absentee status and voting activity. If you believe there are potential legal violations, you are encouraged to contact your local law enforcement agency.