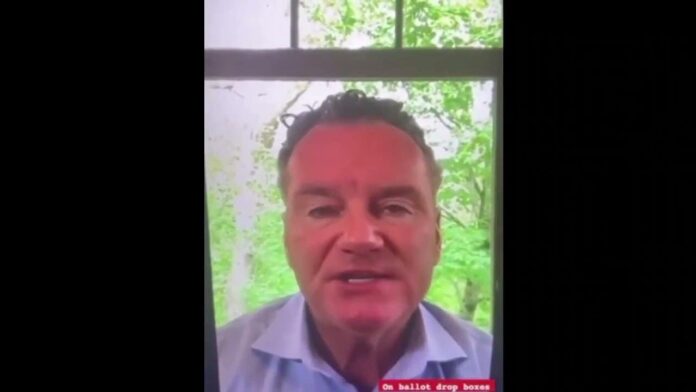 Democracy in the Park, which has been hotly criticized by Republicans, involved manned dropboxes.

You can watch the video here:

Tim Ramthun, who is also running for governor, told WRN that he believes “the idea of “manned drop boxes” is to circumvent the law with a condition that would allow the law to be abused. “As such, I do not support.”

It’s not clear who the woman is doing the questioning. We asked Michels’ campaign multiple times about the video, and they did not respond about it. But Michels makes his position clear.

Manned drop boxes were a point of great controversy in the 2020 election. Through “Democracy in the Park,” a pair of events Sept. 26 and Oct. 3, 2020, more than 17,000 voters dropped off absentee ballots at stations set up in Madison’s 206 city parks. The events were staffed by poll workers who had either worked in the past or were scheduled to work the Nov. 3 election, each of whom was sworn in as an election inspector.

Michels’ statement comes as unmanned ballot drop boxes were declared illegal by the state Supreme Court. However, conservative talk radio host Mark Belling on July 12, 2022, in the wake of the Supreme Court decision, raised concern that manned dropboxes could be used as a loophole to get around the court decision.

“Nothing in the statutory language detailing the procedures by which absentee ballots may be cast mentions drop boxes or anything like them. The record evidence WEC cited does not support its argument that ballot drop boxes have been in common and longstanding use in this state,” the state Supreme Court said about unmanned dropboxes.

My Statement on the Wisconsin Supreme Court's Decision on Ballot Boxes. pic.twitter.com/azVgOA1Jeu

Michels has an election blueprint on his campaign website. It includes this statement: “Ban on unmanned ballot drop boxes” and “Ban on pop-up polling places.” He’s also said he opposes “illegal ballot harvesting.”