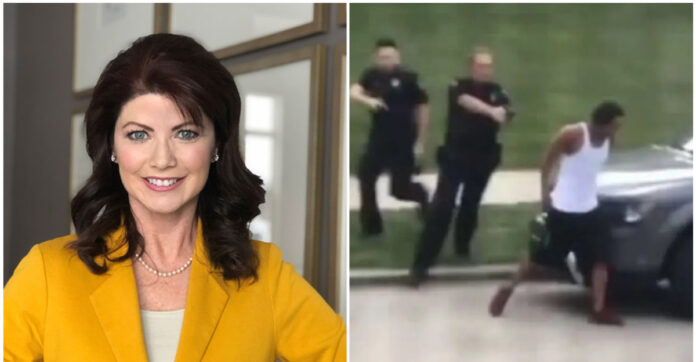 Did Rebecca Kleefisch rush to judgment in the shooting of Jacob Blake?

In 2021, the Milwaukee Journal Sentinel reported that Kleefisch once said “far too many shots” were fired in the police shooting, which was later ruled justified.

We think the quote by Kleefisch raises questions and is worth exploring. While it’s just one quote in many, many public appearances, and there’s no question that she’s been a strong supporter of law enforcement throughout the years, words matter, especially in highly emotionally charged times.

It’s easy for public officials to take an officer’s side when all of the facts are in, but it’s imperative they don’t leap to judgment before facts are in, especially when the public is already inflamed because of a snippet of misleading video.

So what did she really say and what was the broader context?

The Kenosha officer in question, Rusten Sheskey, was later exonerated by a Democratic district attorney. That’s because Blake had armed himself with a knife, was twisting toward the officer, and was about to take off with children in a car that wasn’t his, despite being wanted on a sexual assault warrant.

The Journal Sentinel story, written by Patrick Marley quoted her as saying: “All I know is what I saw and what I heard, which was far too many shots for a man who had his back turned.” She made the comments on Aug. 24, 2020, a day after the Blake shooting and before many details were known beyond the emotionally charged video that went viral.

Tony Evers, of course, rushed to judgment against the officer, saying at the time of the shooting, “While we do not have all of the details yet, what we know for certain is that he is not the first Black man or person to have been shot or injured or mercilessly killed at the hands of individuals in law enforcement in our state or our country.”

Evers maliciously inflamed racial tensions. Kenosha burned as he failed to get the National Guard to that city in time to prevent many of the arson fires that WRN live streamed.

We asked Kleefisch’s campaign about her quote, and they said, “From the beginning, Rebecca has said that 30 seconds of cell phone footage isn’t enough to judge this incident. She was providing an example of why it was important to reserve judgment by describing what a person would see from the video. Rebecca has always believed police officers are forced to make split-second decisions and that it’s never appropriate to criticize them without a full account of the events that transpired. Rebecca is law enforcement’s pick for governor, and that includes an endorsement from Kenosha’s own Professional Police Association Board.”

According to WISN-TV, Kleefisch was asked about the Kenosha police shooting at Waukesha County Republican Party Headquarters in a q and a with reporters. She was there to support President Donald Trump.

“When we have a leader who speaks to safety and who speaks to equality, the bully pulpit of the presidency or any sort of political leadership role is an opportunity to unite people and help good cops have the support that they deserve and weed out the bad cops that we don’t want on the streets,” she said. “That is a danger to society and I think that is something we can all agree on.”

Shortly after the shooting and long before the officer was exonerated, reporters pressed Kleefisch about whether she was saying Sheskey was a bad cop. She said she would, in the words of WISN-TV, “wait to pass judgment until an investigation was finalized.”

The fuller quote is:

“All I can judge by is the cellphone video that’s been passed around Twitter and Facebook over the last 24 hours. From what I saw, it looked horrific. From what I saw, it was something that scared me and scared my kids. I don’t know what the investigation is going to yield. All I know is what I saw and what I heard, which was far too many shots for a man who had his back turned.”

The original Journal Sentinel story from Aug. 24, 2020, on that event, was headlined, “At Trump event, Rebecca Kleefisch criticizes state leadership on Kenosha shooting.” It didn’t even get into the “too many shots” quote.

In that story, the newspaper revealed that she also urged people to defend, not defund, the police. That detail did not make the later JS story that also abridged the quote.

“I think that one of the things we need to ensure is that when we talk about situations like what we’re seeing in Kenosha right now, is that we have more accountability and transparency … and that only comes from defending the police, and not defunding the police,” she said at the event, according to that Journal Sentinel story.

On Aug. 24, 2020, she shared the story on the event on her Facebook page, and spoke about waiting for the investigation.

“What happened in Kenosha – from the police-involved shooting, to the officer getting hit in the head by a brick, to the rioting and arson – is not representative of our Wisconsin. Everyone should feel safe, equal, and hopeful here. Leaders should want this for all neighbors… not just some. Now we wait for the investigation, we feel sorrow for the children who saw their father shot, and we pray for the protection of good cops throughout Wisconsin. We need our streets to be safe for all families,” she wrote.

When Evers issued a statement that appeared critical of the decision not to charge Sheskey, Kleefisch wrote on Facebook, “Governor Evers, you can’t believe in equality and peace for all if you don’t also believe in our justice system. The justice system administers those. You say it’s failed. It is the state’s investigation that cleared the officer.” She added,  “I would urge you to replay the livestream of the press conference explaining the evidence. I would then urge you to look up the definition of ‘equity.’ Then, I would urge you to stop using your people’s tragedies to further your own left-wing agenda.”

She also bashed Evers right after the Kenosha shooting, tweeting on Aug. 26, 2020, @GovEvers‘ total lack of leadership while Kenosha burns and people die is a disgrace to Wisconsin. Thank goodness the President forced him to take action. And 2 more have died senselessly because @GovEvers throws safety to the wind, stoking flames of hate burning in cities with looting, violence as he does too little too late. Kenosha asks for more than 1,000 National Guard to protect innocent lives! Why does it take POTUS to act in WI.”

“Governor Evers’ total lack of leadership while Kenosha burns and people die is a disgrace to Wisconsin.

On Monday, the Governor said, ‘although we must offer our empathy, equally important is our action. In the coming days, we will demand just that of elected officials in our state who have failed to recognize the racism in our state and our country for far too long.’ So why did it take the President to actually offer action in Wisconsin to protect our citizens?

Two more have died senselessly because our Governor is throwing safety to the wind and stoking the flames of hate that burn in cities where arson, looting, violence and threats loom large as he does too little too late.

We deserve more from our Governor.”

On Sept. 10, 2020, she wrote a comment on Facebook that was directed at Evers about Kenosha: “People died. You refused additional help. You waited days before even showing up, then said you got there as soon as you could. You really wouldn’t change anything?”

Kenosha law enforcement supports her despite the comment. “Rebecca Kleefisch has always had the backs of the brave men and women who stand on the thin blue line. So while her opponents may try to twist words and take statements out of context, we in the law enforcement community know the real Rebecca and what she stands for. We also know she is the best candidate to take on Governor Tony Evers this fall,” Pete Deates, a Kenosha police officer and president of the Kenosha Professional Police Association wrote in a column in Wisconsin Right Now.

She’s also been endorsed by the Wisconsin Fraternal Order of Police, a majority of Wisconsin’s Sheriffs, and the Milwaukee Police Association.