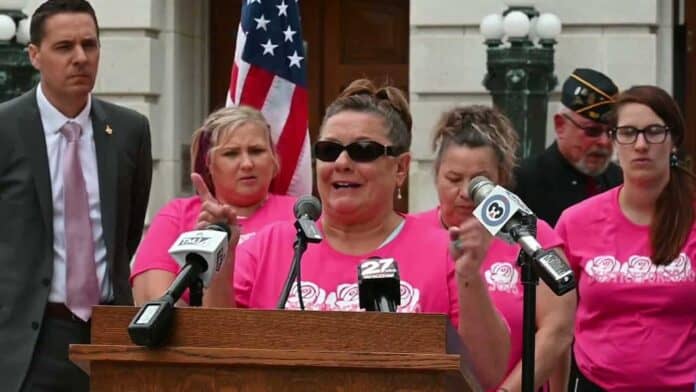 Nikkole Nelson was 2 years old when her father stabbed her mother 42 times, leaving Nikkole and her toddler brother overnight in their mom’s blood. On Thursday, Nikkole joined her mother’s other family members to send a strong message to the state Senate: Please call the vote to remove Tony Evers’ parole commission chairman John Tate, who tried to release the convicted wife killer early.

“I don’t know much about my mom, but I’ve heard stories about her,” Nelson said. “I do remember that night clearly. I was sleeping with her when my dad came in and stabbed her to death. I don’t understand why the Senators won’t sign this. It’s not political…what John Tate did is very unfair and should not have happened and should not be happening for other families, and he should be removed. There is no reason people should not want to sign it (the petition to force the vote).”

Sen. Roger Roth (R-Appleton) has drafted a 2nd petition seeking to override the state Senate’s majority leader and force a legislative vote to fire Tate, who rescinded the early release of Douglas Balsewicz only after great pressure from the family and media and, belatedly, Gov. Tony Evers.

Roth drafted the 2nd petition after the first petition, which expired on Thursday, only received 7 total signatures, all Republicans. 17 are needed to call the Senate into session. Evers, who can fire Tate on his own, has remained silent about why he won’t. Senate Majority Leader Devin LeMahieu (R-Oostburg) could also call the vote but is refusing.

“The truth is that we shouldn’t have to be here today,” Roth, who is running for lieutenant governor, said in a news conference at the State Capitol. He was accompanied by Nelson and multiple members of Johanna Balsewicz’s family and Republican state Sen. Stephen Nass.

The family is calling on either Evers or the Republican-controlled Senate to fire Tate.

“If our governor can’t do this thing right, it’s got to fall on the Legislature,” said Michael Binder, the victim’s brother, a military veteran. “And leaders to pick it up and try to do the right thing, and we’re hoping today with the messages we have, that that is going to happen for Johanna and her children, for my mother who endured all of those years… we have to be the mouthpiece. Senators, please do the right thing and make sure John Tate II is removed from this position.”

Kim Cornils, the victim’s sister said, “Why should it take my family and I going through PTSD again to ask for the senators to do the right thing? It makes no sense to me.” She called Tate a “coward” who wants to empty the prison system. “I am calling on the senators to sign this petition, and I will guarantee this. This family, we will not stop. We have rights. Do the right thing.”

“This is a monster that did this, and John Tate, shame on you,” said Karen Kannenburg, the sister of victim Johanna Balsewicz. “…John Tate, you are not fit to do this job….This man needed to be fired on the spot. He’s not capable of making good judgment decisions. We need every senator to sign this petition. John Tate needs to be removed from office.”

Family members went from door-to-door visiting officers of state Senators, both Republicans and Democrats, asking them to sign the petition. The office of state Sen. Patrick Testin, a Republican also running for lieutenant governor, signed it. No other senators were in. A staffer for state Sen. Tim Carpenter, a Democrat, said he will not sign the petition. A staffer for state Sen. Jerry Petrowski, a Republican, accused the murder victim’s family of playing “gotcha” games because WRN was allowed to record the meetings so the public can learn what is going on.

LeMahieu (R-Oostburg) has blatantly said he thought Republicans gained more politically against Evers by not acting. However, the family of murder victim Johanna Balsewicz and four Republican candidates for governor and attorney general have called on the Legislature to remove Tate, a Racine alderman who wants to repeal truth-in-sentencing and other tough-on-crime measures, even as violent crime skyrockets.

On Wednesday, Senate president Chris Kapenga told Wisconsin Right Now that he didn’t know all the facts, needed more information on the case and wasn’t sure Tate’s actions were egregious. He also said that the Senate Judiciary Committee should hold a hearing to gather the facts, but that Republican Sen. Van Wanggaard won’t call it.

The family stopped in Kapenga’s office to talk to him, but he wasn’t there. They left copies of court transcripts to provide him with the facts of the case, which have been widely reported for weeks.

The Legislature is out of session until January. The family requested meetings with multiple senators.

Kleefisch first discovered that the state Legislature had never confirmed Tate, even though Evers nominated him twice (in 2019 and 2021), so they have the power to reject the nomination now, essentially firing him. Tate has sole authority to decide which inmates are released on parole.

No Democrats in the Legislature have voiced support for firing Tate, although Johanna’s family has specifically urged them to do so.

Evers dramatically flipped on his own nominee after meeting with Johanna’s family and asked Tate to reverse his decision to parole Douglas Balsewicz, which Tate then did within hours of getting the governor’s letter. But the governor has balked at firing Tate.

Wisconsin Right Now has urged the Legislature to come into the extraordinary session, as has conservative talk radio host Mark Belling.