A 17-Year-Old’s View: The Left is Terrified of Equal Protection for the Unborn 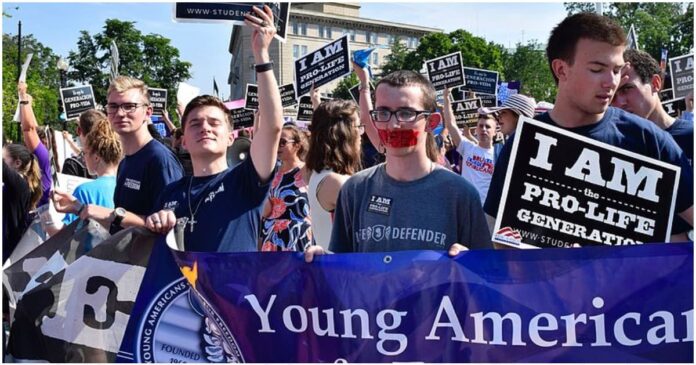 At 17, I’ve come to learn that it is deemed socially unacceptable to talk about abortion under the dictatorship that is leftism. You’re supposed to keep your head low when talking about “reproductive rights,” just in case your opinions happen to offend or upset someone who disagrees with you. It’s a hush-hush topic that you’re supposed to let be.

Even in recent months, as I’ve been gaining confidence in my pro-life standpoint, I still find myself flustered and red in the face when I ask a pro-abortionist about their views or add to a discussion during class.

But why should we stay quiet? Regardless of your opinion on abortion, it is a matter of life and death to millions of lives across America. Pro-choicers (I like to call them pro-abortionists- for whatever reason they get really mad when called that) have mastered the censoring of “reproductive rights,” but we can’t let them silence the discussion any longer. The abortion discussion is one that needs to happen, and it’s time to talk about it.

According to the Merriam-Webster dictionary, the definition of abortion is a “termination of a pregnancy after, accompanied by, resulting in or closely followed by the death of an embryo or fetus.”

Medical abortion is simply taking two medications, misoprostol and mifepristone. Within about five hours of taking both medications, the ‘fetal tissue’ (aka the baby) will have passed through the body.

A Dilation and Evacuation procedure consists of removing parts of the baby’s body with forceps and vacuuming out any leftover tissue with a suction tube.

Below is former abortion doctor Dr. Anthony Levantino as he describes a Dilation and Evacuation procedure. A Labor Induction Procedure is rare but usually occurs when a woman’s life is in danger. Labor is medicinally induced which causes the uterus to drain over 12-24 hours.

Back in her 2008 presidential campaign, Hillary Clinton reiterated her husband’s standpoint on abortion, claiming that abortion should be three things: “safe, legal, and rare.” Pro-abortionists began to chant those magic, cynical words, but let’s break that notion down. Her first point is that abortion should be safe; which it simply isn’t. To have an abortion quite literally results in the death of at least one living human, and sometimes, two living humans.

According to World Health Organization, 45% of abortions are medically unsafe and up to 13.2% of maternal deaths are caused by abortion complications. It’s estimated that 30 women die for every 100,000 abortion procedures. By Planned Parenthood’s own statistics, this would mean that in 2019, 106 women lost their lives after or during an abortion procedure. Not to mention the mental and emotional toll that having an abortion takes on a woman. By nature, women have it in them to nurture and care for others.

Regardless of what the frightening rainbow-haired, unshaven ‘feminists’ will try to tell you, it is in the female nature to be maternal. By depriving women of their ability to provide, especially when that deprivation is self-inflicted, women end up being 37% more likely to suffer from depression later in life.

So to counter Hillary’s first claim, no, abortion is not safe. The second claim is that abortion should be legal. The basis of Roe V. Wade was on the false premise that the Constitution protects the right to personal privacy. However, nowhere in the Constitution, including the Fourteenth and Ninth Amendments, is the word privacy stated.

The Fourteenth Amendment was not meant to create new rights for citizens but to protect those already provided. But, let’s say that the privacy argument stands valid for the pro-abortionists. It could virtually be applied to any cases involving children or childbearing, including child abuse and child pornography.

Abortion is not a Constitutionally legal right. Finally, Clinton claims that abortions should be rare. By saying this, she irreversibly contradicts all the baby killers over at Planned Parenthood and their efforts to convince the world that abortion is A-Ok. To say that something should be rare is to imply that it has questionable moral value. Because if something was good, or at least had an indifferent impact on society, why should it be rare? And a little bonus point: abortion is not rare.

Since Roe V Wade was passed in 1973, over 66 million abortions have been performed. This means that in the United States, about 3,000 abortions are performed each day. Abortion is neither safe, legal nor rare in America today. It has never been, and it never will be.

As we have all come to know, the left is a master manipulator of words. They use phrases like ‘terminating a pregnancy’ and ‘fetal tissue’ and ‘women’s healthcare’ to dehumanize the act of abortion. Even to coin the term ‘pro-choice’ is a genius strategy, as it sounds ironically American. (Trigger warning: sarcasm) What bigoted, women-hating nitwit would oppose the women’s right to choose? Who could force women to give up their dreams and be a low-life, unsuccessful and patriarchal housewife? Give women the right to choose what to do with their own body!

To any average person, to be ‘pro-choice’ sounds like being for freedom. American ideals. Women’s liberation. And the way the left paints the art of motherhood as some anti-feminist patriarchal regime only pushes away those who would usually be in favor of the pro-life standpoint.

By the way, to say “I would never have an abortion, but I wouldn’t care if someone else did,” is still the same as being pro-abortion. Compare it to “I would never own a slave, but I wouldn’t care if someone else did.” Actually, slavery, the Holocaust and abortion aren’t too different. All horrific, tragic events consist of one population disregarding another population as less than human taking advantage of that ‘lower-ranked’ population. Slaves were considered only three-fifths of a human and during the Holocaust, Jewish people were considered “parasitic vermin,” much like today’s victims of abortion, unborn children.

Margaret Sanger, one of the founders of Planned Parenthood, which originally was Birth Control Freedom of America, was a known eugenicist. After getting rejected by feminists of her time for being too radical, Margaret Sanger decided to ally with the eugenics movement to push contraceptives and birth control, which was not socially acceptable then, in a more appealing way. In the 1920s-30s, Sanger campaigned on the success of eugenics activism.

At birth control conferences, a common theme was to put an end to the procreation of the unfit. In 1920, Sanger made a public statement that “birth control is nothing more or less than the facilitation of the process of weeding out the unfit [and] of preventing the birth of defectives.”

According to Autonomy Revoked: The Forced Sterilization of Women of Color in 20th Century America by Paola Alonso, while Sanger was not the first reproductive rights activist who stood with eugenic beliefs, she is the most infamous because of her association with Planned Parenthood.

The contraceptives that Sanger advocated for were often disapproved from other eugenicists as it was feared that the population they were trying to eradicate would misuse the contraception and that the only population smart enough to properly use birth control, rich white families, would commit a “racial suicide.”

Planned Parenthood has since tried to distance itself from Margaret Sanger’s endowment, but we can’t let them soon forget that their organization was built on racist principles and an intent to rid society of anyone who didn’t fit their white supremacist narrative.

After nearly 50 years of legalized abortion, 55% to 65% of Americans claim to be pro-choice. The majority of Americans are willing to stand by and watch, even encourage, the death of millions upon millions of babies.

The leak of the Supreme Court’s opinion draft just the other day was possibly the most ground-breaking news to anyone who believes in the right to life, second only to Roe v. Wade getting overturned.

If anything, the imbecile who decided to leak the draft proved more to the world than the draft itself: that the left is terrified of equal protection for the unborn.

At even the possibility of Roe getting overturned, the left will do whatever it takes to keep murder legal. To strike down any conversation that questions abortion and “the women’s right to choose.”