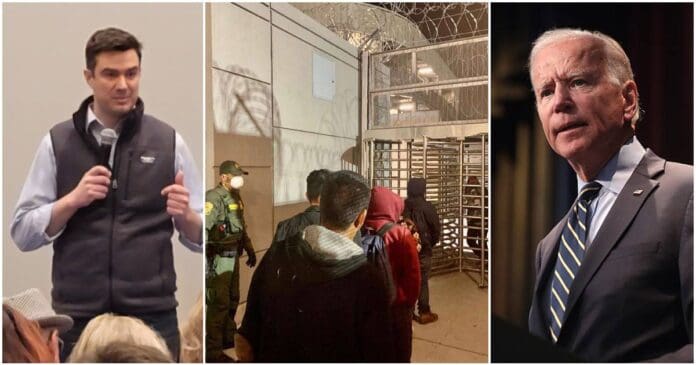 All along the American southern border, a humanitarian and security crisis is growing. Wisconsin isn’t South Texas or Arizona – all you need as a reminder is to step outside during this unseasonably cool spring.

But make no mistake: the problems of the southwest border find their way to Wisconsin all the same. And with President Biden set on rolling back important border security practices instituted by President Donald Trump, the problems at the border are about to get a lot worse.

Enacted by President Trump in 2020, Title 42 has helped the U.S. Customs and Border Protection stem the tide of people and drugs across the southern border throughout the Covid-19 pandemic. The Biden administration has announced plans to end Title 42, opening the floodgates to a wave of uncontrolled immigration. As many as 18,000 people could cross the border every day, and Mexican cartels will surely attempt to smuggle in vast quantities of fentanyl into the country while law enforcement is overwhelmed. The effects of this action will be felt in Wisconsin before long, and they will be deadly.

But when Wisconsin needs a champion to step up and fight to keep our communities safe, Governor Tony Evers is missing in action. Rolling back Title 42 has received bipartisan opposition — including from more than half the nation’s governors — because an unsecured border affects the entire country. But Gov. Evers? Instead of standing up for Wisconsin and urging the president to reconsider, we get silence.

The reality is drug abuse and addiction are already ripping communities apart. Talking to law enforcement across our state, three things are clear: we have a drug problem and a violent crime problem; they’re related; and the situation is getting worse.

In 2020, the last year that full records are available, the state of Wisconsin had more than 1,500 drug overdose deaths. Sadly, when the final numbers are tallied, 2021 deaths figure to be even higher. After all, in Milwaukee County last year alone there were nearly 650 drug overdose deaths. That’s triple the number of murders Milwaukee registered over the same time period.

While the drugs of choice vary across different regions of the state, the abuse problem is not an urban or rural issue. It’s an all of Wisconsin issue. And the leading culprit are opioids – fentanyl specifically. Cheap and deadly in small amounts, fentanyl is a favorite of the Mexican drug cartels. It’s wreaking havoc now even with the immigration controls in place. With President Biden opening the floodgates, it’s only going to get worse.

All this is playing out at a time when soft-on-crime Wisconsin politicians – Democrats and even some Republicans – are pushing a plan to wipe more felons’ records clean of some “low-level” offenses, including drug-related crimes.

There’s no doubt many offenders can and should be rehabilitated. Working with Senator Ron Johnson on the Joseph Project, I’ve met wonderful people who have turned their lives around and made a difference in communities across the state.

But regardless of the intentions behind expanding felony expungement, the message it would send would be horrendous. Complex legal and policy issues get distorted through hearsay and public misperception with massive implications — look no further than the confusion over the Biden administration’s border policies. Now imagine would-be criminals getting it in their heads that they might get a freebie felony as long as it’s “low level.”

One of those supposed “low-level” felonies that would be eligible to be wiped clean — auto theft — is already at “epidemic” levels in Milwaukee already and is “an underlying issue for reckless driving and violent crime in our city” according to Milwaukee police.

At the end of the day, we need to strengthen the rule of law, not poke more holes in it. That’s the case on our southern border, and it’s the case in our own backyard. But that requires leadership — something that is unfortunately sorely lacking among politicians in Madison these days.

Ben Voelkel is a Wisconsin Lieutenant Governor candidate and a longtime senior aide to Senator Ron Johnson. More information about Ben and his campaign can be found at benforwisconsin.com. Follow @BenforWI on Facebook and Twitter.

According to PEW Research Center, Title 42 refers to a rarely used section of the U.S. Code that dates to 1944. The law empowers federal health authorities to prohibit migrants from entering the country if it is determined that doing so could prevent the spread of contagious diseases.

The CDC invoked Title 42 at the beginning of the U.S. COVID outbreak in March 2020, giving Border Patrol agents the authority to swiftly expel migrants attempting to enter the U.S. instead of allowing them to seek asylum within the country, as had long been the policy before the COVID pandemic. Migrants expelled from the U.S. under Title 42 are returned to their home country or most recent transit country.