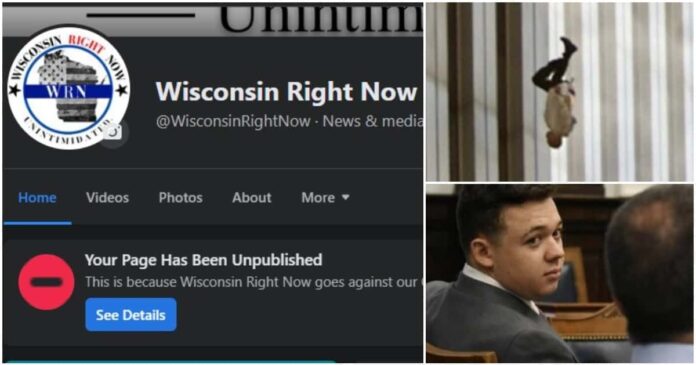 One of our most recent posts defended former Lt. Gov. Rebecca Kleefisch against sexism. They unpublished us for our factual coverage of Kyle Rittenhouse and for sharing an iconic piece of journalism about Sept. 11, 2001.

If you want to receive our news outside social media, please go to our website and sign up for our newsletter here. Our email list is large and growing, so that helps us continue to get the word out about our stories, but please consider adding your name to it. In addition, you can follow Wisconsin Right Now on Twitter. Please also consider becoming a member for any amount so we can keep this going.

Unbelievably, Facebook said we violated community standards on April 21, 2022, for an old post that was a share of an article about an ICONIC, famous piece of journalism called the Falling Man. The Falling Man is a highly regarded and well-respected evocative magazine article by Esquire Magazine’s Tom Junod. Many consider it the BEST piece of journalism about 9/11.

We appealed that violation. They reversed it (see below for the original post – it was just a story share), but left our page unpublished, even though that was the reason cited for unpublishing it. Got that?

We tried to appeal, but when we click on the appeal link in the email they sent us, it goes to an error page.

We pride ourselves on factual coverage. We do not further or traffic in conspiracy theories or false information. We meticulously fact-check all of our stories, file open records requests, interview people, go to scenes, etc. And we have won prestigious journalism awards that recognize the care we put into our work.

The story, which we didn’t write, eloquently and sensitively compared the iconic Falling Man to the horrific scenes of people jumping from planes in Afghanistan. The photo with the story is a famous photo used by MANY credible news sites to properly humanize the horrors of the terrorist attacks. Junod’s search for the Falling Man’s identity is a moving story about the need to humanize the civilians who died that day.

We do NOT have a long history of violations. Let us be blunt. Facebook unpublished us for the Falling Man post and for our coverage last November of the Kyle Rittenhouse trial. That’s because they started restricting us over Rittenhouse.

Apparently posting a story about the Falling Man, which they now admit did not violate their community standards, is enough to get us unpublished now because they didn’t like our previous analysis on Rittenhouse, who was acquitted.

Facebook hit us with a couple of previous “community standards” violations last November for our fact-based coverage of the Kyle Rittenhouse trial (we won a 2021 Milwaukee Press Club award for it). What didn’t they like about our Rittenhouse coverage? They socked us with a violation for a fact-based analysis of state firearms laws and the Rittenhouse case that was proven correct (the judge dismissed the charge a couple days later). Then they hit us for complaining that they were banning readers from sharing that post.

Got that? They thought it was a violation to analyze Wisconsin laws – correctly. They deemed Rittenhouse a dangerous person or organization, removing his presumption of innocence, and didn’t even reverse the violations when he was acquitted by a jury of his peers. They also didn’t like a silly meme we posted about the judge in the Rittenhouse trial playing video games with Rittenhouse.

After that, they banned us from going on Facebook Live and restricted our ability to invite people to our page. That’s even though our Facebook Live coverage of the Kenosha riots was viewed by thousands of people. We simply walked around and showed people what was really going on at a time the media had basically left.

Right now in America, the free flow of information is controlled by a couple of large, unaccountable tech companies. This should frighten all Americans who care about Democracy. You don’t know who is making the decisions and sometimes even why.

Rittenhouse is when they started aggressively watching us. But we had only two violations between our Rittenhouse coverage and being unpublished: The Falling Man story share and a share of a Fox News story, which Facebook’s fact-checkers said was partially false. That’s the only other thing they ever knocked us for.

So got that? To round it up, we were unpublished for:

But we won’t give up. We will double down and find other ways to get an audience.

On April 21, 2022, Wisconsin Right Now received an email from Facebook informing us that our page was being unpublished because it “violates Facebook pages terms.” As noted, Facebook first started subjecting Wisconsin Right Now to restrictions (limiting our ability to invite new followers, for example, and preventing one of our admins from publishing anything for days) due to our fact-based analysis that the gun charge against Kyle Rittenhouse was likely not allowable under state law. Our original news story had a photo run by MANY news organizations of Rittenhouse with the gun.

We wrote, “State law on when minors can carry guns is extremely confusing, but a careful reading of the wording shows it exonerates Kyle Rittenhouse on the gun charge. He was carrying the gun legally. The Legislature should clean up the law.” Just days after our story, which was based on the judge’s comments in court, the Wisconsin judge dismissed the gun charge using exactly the same analysis. We were told that Facebook had labeled Rittenhouse a dangerous person or organization.

In fact, Wisconsin Right Now helped lead the way in fact-based coverage of that case. We were at the scene as journalists interviewing witnesses that night, and our co-founder Jim Piwowarczyk even found a missing shell casing at the scene that authorities mentioned during the trial. We also wrote stories – including one that won a Milwaukee Press Club award – exploring the weaknesses in the prosecution’s case.

Rittenhouse, of course, who made a self-defense claim, was later acquitted by a jury of his peers. We simply examined the known facts, yet for this Facebook began targeting Wisconsin Right Now.

One of our most recent posts on Facebook denounced an effigy that liberals in Madison made of Republican gubernatorial candidate Rebecca Kleefisch, labeling it sexist. Kleefisch had tweeted a picture of it. We wrote “this is sexist.” Judge for yourself. 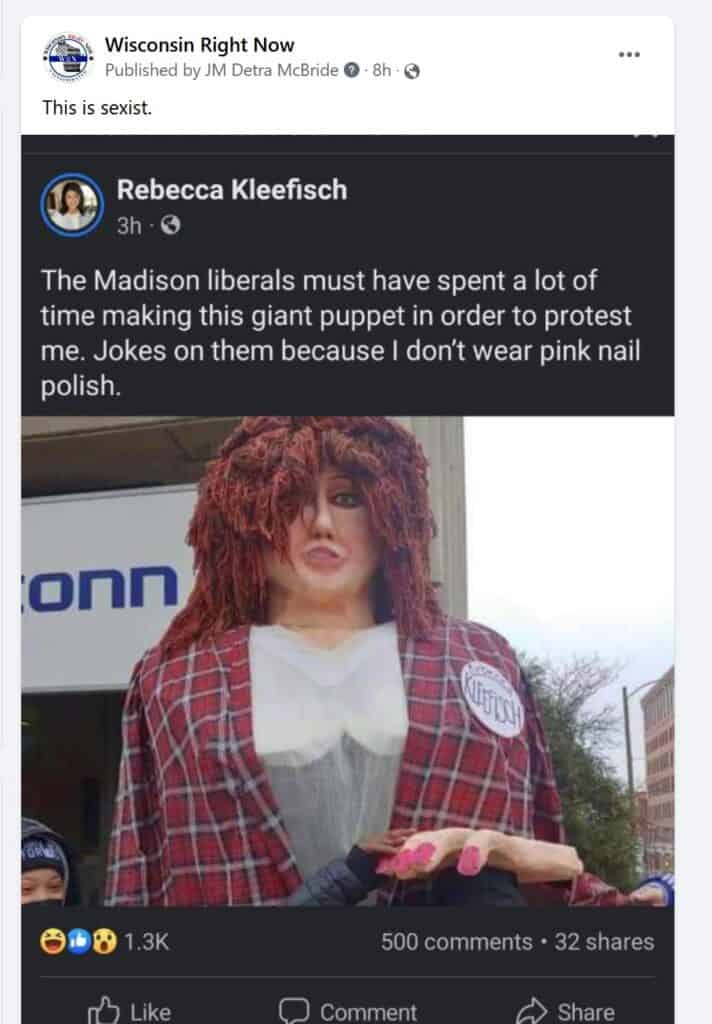 Other recent posts were just shares of our stories. Recent stories explored potential gubernatorial candidate Tim Michels’ positions on unions, former Ald. Bob Donovan considering running for state Assembly, Attorney General Josh Kaul’s bad crime lab numbers and clergy sex abuse investigation, a new ad against Tony Evers by the Republican Governors Association, the media’s refusal to cover Kaul’s office’s ties to the Darrell Brooks bail hearings, a column by Congressman Tom Tiffany, and Evers’ vetoes. In short, there were no reasons that Wisconsin Right Now’s Facebook page deserved to be unpublished. The site is offering important news that people can not get elsewhere. We verify facts. If we can’t prove it, we don’t report it.

We have had millions of readers since we started in August 2020. We are run by two award-winning journalists – Jessica McBride, a journalism educator with 25 years of journalism experience and Jim Piwowarczyk, a small businessman and former law enforcement officer. Wisconsin Right Now is a recipient of prestigious Milwaukee Press Club awards for 2020 and 2021 for its journalism. In fact, we won awards for a photo at the Kenosha riots and for a column on…Rittenhouse.