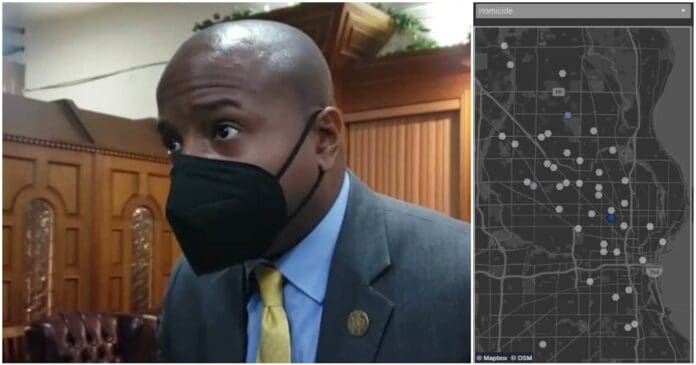 The comments, which Johnson made on March 29, 2022, to the Milwaukee Journal Sentinel, come as homicide explodes in the City of Milwaukee.

The headline on the story, by Alison Dirr, reads, “Milwaukee Acting Mayor Cavalier Johnson says he has not had time to implement full public safety plan.”

It reports that Johnson, who is squaring off against former Ald. Bob Donovan, “said Tuesday he hasn’t yet had time to implement the full public safety plan he proposed at the beginning of his tenure.”

Johnson’s comments come as homicide has exploded in Milwaukee. There have been 50 homicides so far in 2022, compared to 25 in 2021, a 100 percent increase, according to the city’s crime dashboard.

And, remember, that’s on the heels of two RECORD years for homicide in Milwaukee.

“When you’re in this position when a mayor resigns, you get thrusted right into a snap election,” Johnson told the newspaper when asked about homicides. “So you’ve got to spend time governing the city, but you also have to campaign for the office.”

You can read the full Milwaukee Journal Sentinel article here.

What has Cavalier Johnson been doing instead of completing a full public safety plan for the city? According to his most recent post on Facebook, hobnobbing with Democrats.

“Enjoyed meeting so many engaged Milwaukeeans at the WisDems meet and greet tonight at Flores Hall. Milwaukee Democrats are fired up and ready to get out the vote and make sure Milwaukee wins on election day next week,” he wrote on March 29.

Johnson has a history of advocating slashing the Milwaukee police budget, among other anti-police actions and comments.