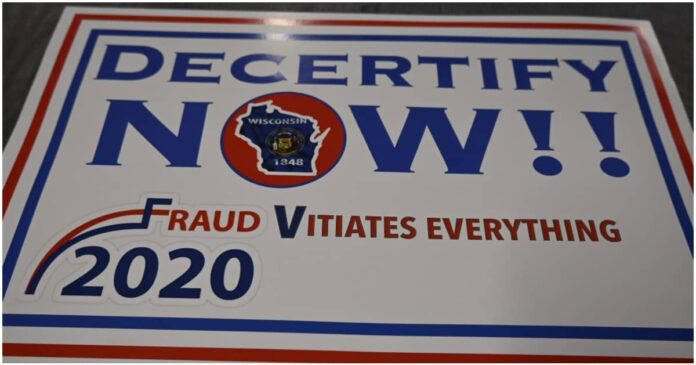 The best way to ensure election problems are fixed is to elect a Republican governor. But the decertification narrative – pushed by a few – is sabotaging that objective.

“Decertify the election” is a narrative that needs to stop. Drive a stake in it. NOW.

To be sure, multiple investigations confirm there were serious problems in the 2020 presidential election, many of them centering around the unelected partisans on the Wisconsin Election Commission who decided they could unilaterally ignore the law. That’s now in the hands of local DAs.

The media have falsely tagged all state Republicans with this; just look at the headline in Rolling Stone. “Wisconsin is ground zero for the MAGA effort to steal the next election,” it ridiculously blared, revealing the legacy media template. Actually, there is no widespread groundswell among Republicans for decertification, as far as we can tell. There is certainly no evidence for such.

Many of the core concerns from the 2020 presidential election have been or are being litigated in the courts, where they belong, such as ballot dropboxes and indefinitely confined voters.

Unfortunately, Republicans pushed for an unvetted Brian Hagedorn to be on the Wisconsin Supreme Court, which is proving disastrous over and over again.

Bottom line. The best way to ensure election integrity is to elect a Republican governor. There’s a limit to what legislative Republicans can do with a Tony Evers’ veto perpetually looming.

But the decertification narrative – pushed by a few – is sabotaging that objective.

That’s because it’s given the liberal media the opening to falsely smear all conservatives as crazies and all election integrity concerns as conspiracies. It also won’t accomplish the objective. The best way to get Joe Biden out of office is for Donald Trump to run again and focus on Biden’s endless deficiencies and failures, not on 2020.

Absolutely laughable for a media that didn’t attach the word “false” to the endless nonsense stories resulting from the Steele dossier, Russia and President Donald Trump. When have the media ever questioned Democrats about that?

We hope to see a Trump 2024 run, but he needs to focus on the abysmal record of Joe Biden. Voters want to look forward. The governor’s election needs to be litigation of the failed leadership of Evers and Biden, not of the 2020 election.

The media focuses on decertification because they know that it hurts Republican candidates with independent voters. This was borne out by the cross tabs in the latest Marquette Law School poll. The issue doesn’t sell. In that poll, 68% of independents were confident or somewhat confident that the results of the 2020 election were accurately counted (that’s true of 38% of Republicans and 96% of Democrats.) The percentage of independents with at least some confidence in the election is still 56% when leaners are considered separately in that poll.

There are a few legislators hellbent on highlighting this issue, such as state Rep. Timothy Ramthun, who is running for governor on the issue.

Republican leadership’s response has been flawed. The public spectacle of the Ramthun discipline was a disastrous decision that pushed him to run for governor. Now they’re caught between the Constitution and some of their base.

Former Supreme Court Justice Michael Gableman, the special election investigator for the Legislature, tossed in decertification language at the end of his recent report, a reckless and unnecessary move that distracted from everything else he found.

Legislative leaders were caught off guard because they didn’t know the decertification comments would be in the report. This forced them to field endlessly media inquiries fixating on just that point, deflecting from the other serious election problems raised in the report.

The media are now demanding litmus tests of every Republican candidate. Do they ask all Democratic candidates about the Russia hoax, defund the police, BLM riots, or the Hunter Biden laptop?

All serious candidates should denounce decertification.

That brings us to the most important point. The U.S. Constitution. Remember that? Republicans say they stand for it, and for the rule of law. Time to prove it.

A non-partisan Wisconsin Legislative Council memo found that Republicans lack authority under the law and Constitution to decertify the election at this late date, finding there is “no mechanism” in the law to do it. The electoral college long ago voted so the only mechanisms for presidential removal are impeachment or the 25th Amendment. Sure, Gableman had a warring legal analysis on this point, but the debate helps Republicans… how? It’s not going to happen.

And it shouldn’t. The Founding Fathers were geniuses; they wanted to create a stable government. Decertification would create more chaos in already chaotic times.

Decertification wouldn’t result in a change to the presidency regardless. Remove Wisconsin from the electoral map, and it still goes to Biden.

Focus on the midterms, then 2024. Get back the offices, and then, and only then, can changes for election integrity be made. That’s how Republicans win.