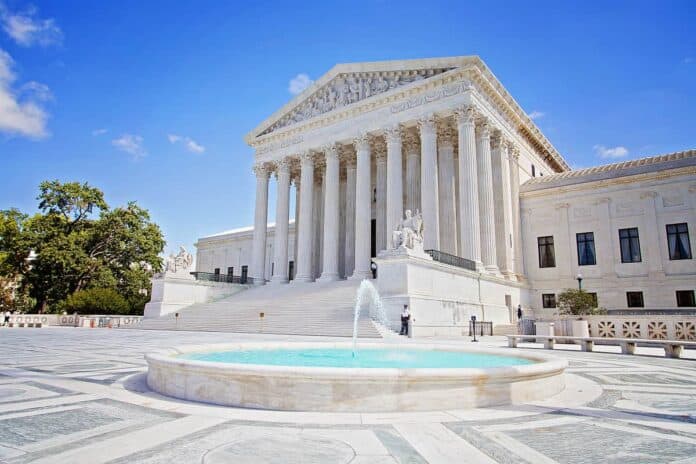 The case was remanded for further proceedings.

The 7-2 majority found that the Wisconsin Supreme Court had failed to answer whether “a race-neutral alternative that did not add a seventh majority-black district would deny black voters equal political opportunity.”

“On remand, the court is free to take additional evidence if it prefers to reconsider the Governor’s maps rather than choose from among the other submissions. Any new analysis, however, must comply with our equal protection jurisprudence,”

“We agree that the court committed legal error in its application of decisions of this Court regarding the relationship between the constitutional guarantee of equal protection and the VRA.”

“The question that our VRA precedents ask and the court failed to answer is whether a race-neutral alternative that did not add a seventh majority-black district would deny black voters equal political opportunity. Answering that question requires an “‘“intensely local appraisal”’ of the challenged district.” LULAC, 548 U. S., at 437. When the Wisconsin Supreme Court endeavored to undertake a full strict-scrutiny analysis, it did not do so properly under our precedents, and its judgment cannot stand.”

This is a breaking story and will be updated.

Below is the order:

The 4-3 decision came down from the Wisconsin Supreme Court on March 3, 2022. Hagedorn, who has also been a thorn in Republicans’ side on election issues, sided with the liberals on the court. Siding with Hagedorn were liberal Justices Ann Walsh Bradley, Rebecca Dallet and Jill Karofsky.

Wisconsin Supreme Court Justice Brian Hagedorn, who convinced voters he was a conservative when he ran for the seat, has authored a majority opinion that adopts Gov. Tony Evers’ legislative maps and Congressional district boundaries. In a sharply worded dissent, conservative justices called the decision unconstitutional racial gerrymandering, noting, “It is beyond dispute that the Governor’s districting plan adopted by a majority of this court assigns voters to districts based on race.”

Justice Sonia Sotomayor authored the dissent and was joined by Justice Elena Kagen:

“In an emergency posture, the Court summarily overturns a Wisconsin Supreme Court decision resolving a conflict over the State’s redistricting, a decision rendered after a 5-month process involving all interested stakeholders. Despite the fact that summary reversals are generally reserved for decisions in violation of settled law, the Court today faults the State Supreme Court for its failure to comply with an obligation that, under existing precedent, is hazy at best,”

The U.S. Supreme Court denied a request by the GOP members of Wisconsin’s House delegation to overturn the congressional map that Gov. Evers had drawn and the Wisconsin Supreme Court justices approved, without comment from the court.