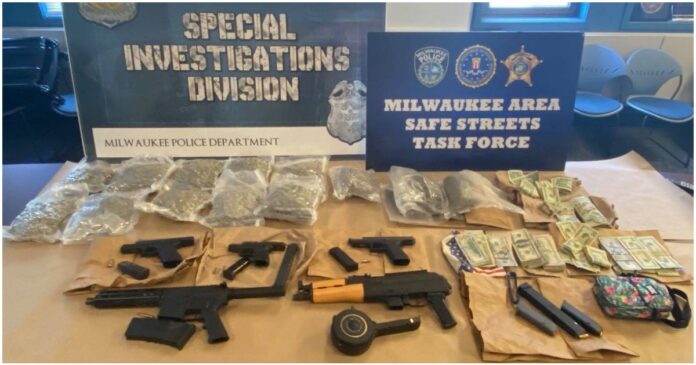 Legislators and Gov. Tony Evers: With crime exploding all around the state and especially in Milwaukee, it’s time to get tough on crime, and remove the sunset clauses. You need to fix this – NOW.

As violent crime skyrockets in Wisconsin’s largest city, especially homicides caused by firearms, politicians look for solutions and public safety demands them. Although the causes of crime are complex, there’s a simple fix that legislators can do now that will make an immediate difference.

Bring back mandatory minimums for violent felons who repeatedly illegally possess guns or commit crimes with them, by removing the sunset clauses in state law that allowed/are allowing them to expire. We are strong supporters of the Second Amendment. But these laws targeted the right people: The most serious violent offenders who repeatedly use firearms to commit crimes.

Two different packages of laws got tough on violent felons who illegally carry guns, both championed by Republican state Sen. Alberta Darling and signed by Gov. Scott Walker, one in 2015 and one in 2018. Both had sunset clauses baked into the original language, however. One expired two years ago, and the second is scheduled to expire in July. They achieved broad Republican support, but they also had the support of some prominent Democrats.

Felons in Possession of a Firearm

The first law targeted felons in possession of a firearm (which is a felony) who had a violent felony on their records. It was limited to those convicted of a previous violent felony in which the new offense happened within five years of completing their sentence for a prior conviction. They had to receive a minimum three-year sentence. The law had a sunset clause dated July 2020, meaning it only applied to people sentenced before that date.

The second law targeted repeat offenders “convicted of illegally possessing a firearm or committing a crime involving a firearm will receive a mandatory minimum sentence of four years.”

The bill defines a repeat offender as an individual who has committed three misdemeanors or one felony within a five-year period.” This law has a sunset clause of July 2022, meaning it will only apply to people sentenced before that date.

Both sunset clauses should be removed. We would also prefer that the five-year limit be removed or expanded.

“Milwaukee is one of the state’s primary economic and cultural engines. If we want to continue to grow Wisconsin we need to tackle the City’s crime problem,” said Darling at the time of the more recent bill. “This bill is an important step forward, making it easier for prosecutors to lock up violent criminals without infringing on the constitutional rights of law abiding citizens.”

The issue is playing out in Milwaukee courtrooms.

Wisconsin Right Now wrote recently about Lavohn Lee Carter who had just been convicted of his 4th offense of Possession of a Firearm by a felon and will not be serving a single day of prison time. That’s because a weak judge, Jean Kies, had the discretion to send him on his way with probation.

Police reports obtained by Wisconsin Right Now through an open records request show that Milwaukee police had a strong felon in possession gun case against Lavohn Lee Carter, an already habitually convicted felon who was on extended supervision for being a felon in possession of a firearm. He fought with officers when they arrested him.

His sentence was outrageous.

The mandatory minimums are needed more than ever before, with homicide dramatically increasing in Milwaukee since they expired, and case-after-case in which weak judges give people slaps on the wrist.

Wisconsin Act 109, put into law in 2015, imposed “a sunset date, providing that the mandatory minimums do not apply to sentences imposed after July 1, 2020,” for felons who repeatedly illegally carry firearms, according to the Legislative Reference Bureau. Here’s the Senate vote.

When the law went into place in 2015, with bipartisan support and championed by Darling, it received some push back from a few Assembly Republicans concerned about the impact on hunters and from some Democrats concerned about the growing prison population. It was the rare bill, though, that saw some prominent Democrats band together with some prominent Republicans to put public safety above politics.

Times are different today. It’s even more necessary. The law was properly tailored to affect only felons with a previous VIOLENT offense.

The second bill reads as follows:

“The Act creates a mandatory minimum term of confinement of four years for any personconvicted of a firearms violation who has been convicted of one felony or three misdemeanors within five years of the commission of the crime. Under the Act, a “firearms violation” is a violation of the straw purchases prohibition, described above, illegal possession of a firearm, or commission of any crime in the Criminal Code or Uniform Controlled Substances Act if the person uses a firearm in the commission of the crime. This mandatory minimum does not apply to sentences imposed after July 1, 2022.

The Act requires DOJ, after consulting with the City of Milwaukee and the MilwaukeePolice Department, to provide the Legislature a report on the efficacy of the new mandatory minimum sentence for firearms violations by August 1, 2022.”

Crime, especially, homicide, escalated dramatically in 2020, 2021, and so far this year, in Milwaukee, with two-record homicide years in a row. Homicide is dramatically up this year to date over those record years.

Legislators, with crime exploding all around the state and especially in Milwaukee, it’s time to get tough on crime, and remove the sunset clauses. The August report is, conveniently, timed for August, right before the election, and it’s in the hands of partisan Democrat Josh Kaul’s DOJ.

This was a narrowly targeted law that focused like a laser beam on the worst offenders (felons who repeatedly defy the law to illegally carry firearms). Every officer knows that a lot of the crime is caused by such heavily armed offenders who repeatedly commit crimes.

Getting tough on them is simply a no-brainer. And it can’t wait.