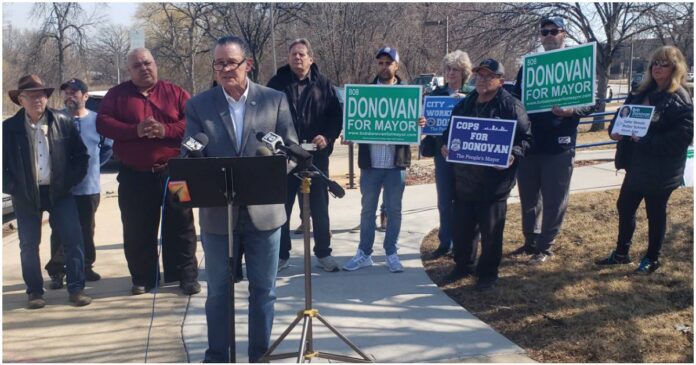 Mayoral candidate Bob Donovan proposed a multi-pronged plan to combat auto theft in Milwaukee, including a new strike force, calling it “unconscionable that we lead the nation in stolen vehicles.”

Donovan said it’s time to get tough on the problem; car thefts hit a record in Milwaukee in 2021, and this year is on pace to beat that.

“As mayor, I would want to send this message to anyone who is contemplating stealing a vehicle,” Donovan said at the news conference on March 21, 2022. “Don’t do it because your next joy ride may end you in jail.”

As mayor, Donovan said he would combat the problem by:

-Creating a “strike force” to “take this issue seriously.” He said he’s heard from people who know “where their stolen vehicle is,” but Milwaukee police wouldn’t do anything about it. “We need this to be a higher priority” for police, he said, calling on other police agencies in the area to help “quickly identify where the stolen vehicles are” and to apprehend those who take them. Donovan said he would ask retired MPD officers to come back to work on the strike force.

-He called for arrest and prosecution of people, including juveniles, who steal stolen cars, specifically mentioning a gang called the “Kia Boys.” Donovan called on the District Attorney and judges to “hold criminals appropriately accountable for their crimes.”

“It is critical we send a strong message and then back up that message with action,” said Donovan.

-Donovan said he “wants to work with young people to send a strong message. This kind of activity is not acceptable.”

-He said he would work with professional athletes and local celebrities to get them involved in the issue.

-Donovan said he would work with the private sector so that all owners of Kia automobiles could take their vehicle to a registered installer, and “we would install this technology that would prevent their car from being stolen.”

“When Bob Donovan becomes mayor, we will work with everyone in this community…We will find solutions that are practical and real,” said former Ald. Angel Sanchez, who was at the press conference.

Donovan was also joined by a Milwaukee entrepreneur, along with concerned citizens. Jonathan Goldoff, inventor of the NoGo, a car security device, explained his technology to prevent cars from being stolen.

Donovan added: “We have more stolen vehicles than the city of Chicago, and they are five times our size.”

“Few things are more devastating to an individual or family than to have their car stolen. Their car is their lifeline to society,” said Donovan, adding, “We have experienced a horrendous increase in auto thefts… that is out of control. We have heard little or nothing from our current administration about precisely how to deal with that.”