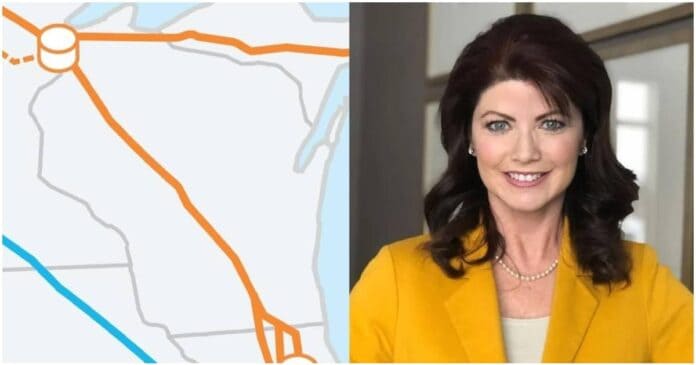 Gas prices, energy bills, and propane heating costs are ridiculous. When Joe Biden entered the White House, gas prices in Wisconsin were hovering at just about $2 a gallon. Now? We’re at the $4 mark with no relief in sight. Democrats can’t explain this away because of the Russian invasion of Ukraine; gas prices had increased by a dollar even before then.

For years, Liberals have prioritized woke environmentalism and Green New Deal policies that cripple American energy independence. When the price of gas goes up, those who live on fixed incomes feel the pain the most. The Left couldn’t care less; they keep pushing their radical agendas regardless of who gets hurt.

Recent conversations uncovered between Gov. Tony Evers and Michigan Gov. Gretchen Whitmer reveal attempts to shut down the Line 5 Pipeline that travels through northern Wisconsin and delivers petroleum to the Midwest.

The consequences of a Line 5 Pipeline shutdown would have been tragic months ago. Now, in the face of rising prices and war in Ukraine, they would be catastrophic. Thousands of jobs lost, millions of dollars of economic development lost for Wisconsin, and higher energy costs for families throughout the Midwest.

Whitmer, a Green New Deal Liberal, is aggressively lobbying Evers in her efforts to shut down the pipeline. If Evers cared about working people in this state, he would loudly advocate against the move. Instead, he stays silent, risking an energy catastrophe.

That’s also why it is so shocking to me that Evers and Whitmer would offer lip service to voters overwhelmed by skyrocketing energy prices while pushing the very policies that cause the prices to rise. The pair recently requested Joe Biden suspend the federal gas tax to make up for their party’s failed policies. After all, they have done to handcuff American energy independence, that type of policy advocacy for a publicity stunt should alarm everyone.

We all watched in shock as Joe Biden killed the Keystone pipeline, dealing a blow to American energy independence (and thousands of Wisconsin jobs). Evers could not be bothered to stand up and say a thing. Now, reflecting on his own reelection prospects, Evers suddenly cares about the cost hikes. It is political theater at its most transparent.

Evers is a poster child for the Left’s radicalism. Wisconsin’s energy infrastructure is an example. A report published by his climate change task force openly advocates for “avoiding all new fossil fuel infrastructure” including the replacement of pipelines so many Wisconsinites rely on for affordable energy.

Tony Evers caved to left-wing environmental radicals, and he wants your family to bear the costs.

Evers’ agenda would have been tragic had it not been for conservatives in the Legislature. He tried to raise the gas tax in his first budget by 36%. Then, he tried to pass a $100 million per year tax increase on electricity costs that would have burdened Wisconsinites in every corner of the state.

Now, Tony Evers wants you to think he cares about your family because he supports suspending the federal gas tax. If he were a Republican, the mainstream media would cry foul and highlight the contradictions.

Enough is enough. This is being done to you on purpose by weak liberal leaders who oppose cheap energy. Don’t let them get away with it.

The best way to ensure that Wisconsin and America become energy independent again is to throw liberals out of office this Fall… starting with our weak, ineffective governor, who cares more about press release policies than he does about Wisconsin families. Tony Evers would rather embrace the left’s radical energy ideas than prioritize affordability for Wisconsinites.

Moreover, when I am governor, Wisconsin’s priority will always be keeping energy costs affordable for hard-working families, not unrealistic goals that will cost you and your family more. I’ll block any efforts to raise the gas tax. I’ll cut the red tape that Wisconsin businesses face by making sure that any new regulation from the government requires two old regulations to come off the books.

I’ll be a vocal advocate for our energy infrastructure, whether it’s Keystone XL or Line 5 Pipeline. Our governor wants to attack fossil fuels while dragging his feet on approvals. I’ll make sure that those who want to provide energy at an affordable cost to our state don’t have to worry about the political whims of the executive office. My priority will always be to protect your family, and that includes your pocketbook.

I’ll step in and join other states in combating federal overreach. When I’m governor, Wisconsin will join lawsuits to push back on overaggressive regulations from the Biden Administration that will hamper domestic energy production. We cannot allow states’ rights to be infringed by a White House that cares more about radical environmentalism than families on fixed incomes.

When liberal leaders prioritize woke environmentalism over the security that comes with American energy independence, they make your family pay the price. These elitists can’t fathom why working people can’t afford electric cars – while in real America we’re all struggling just with affording gas and groceries.

We need energy independence in America. We need it now. When I’m governor, I’ll put an end to the Left’s games and see that Wisconsin is doing our part to keep your energy costs low.