A Safer Wisconsin: My Pledge as Your Governor 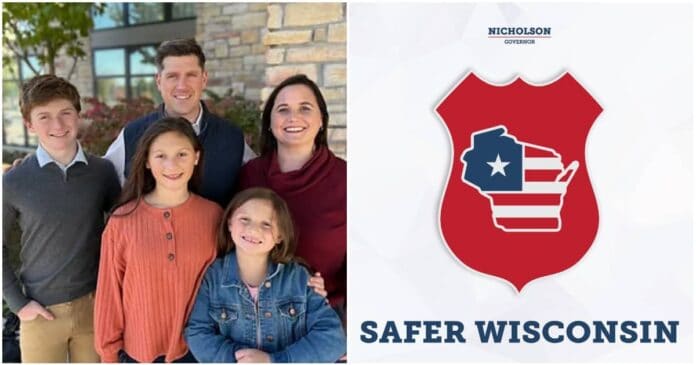 Last May, I wrote about escalating violence in Milwaukee, Wisconsin. At that point, homicides in the city had already doubled over what they were the year before – matching trendlines in spiking violence in cities across America. Ultimately, Milwaukee ended 2021 with 197 homicides, the most in the city’s history. Other communities throughout our state have also seen escalating violent crime rates between 2010 and 2020 – including Green Bay (49%), Eau Claire (37%), Kenosha (31%), and Wausau (71%).

Wisconsin is not just facing a crime wave; we are facing a dissolution of law and order wrought by our inept political class. Through nearly two years of lockdowns, shuttered schools, riots, and the systematic besmirching of law enforcement as a profession, we are in a deep hole and off-kilter.

As a candidate for governor, I understand the severity and scope of this problem – and I have practical ideas for addressing the problem. This week, I announced a 5 Point Plan for a ‘Safer Wisconsin.’

Today, Wisconsin’s law enforcement agencies struggle with the same issues that plague law enforcement across America: slow recruiting and poor retention. Yes, this is a problem in Milwaukee, but it is also a problem throughout our state. At a moment when the U.S. murder rate is at the highest the nation has seen in 25 years, officers are leaving their jobs, and new joins are not signing up, despite the desperate need.

What is causing this? To start, notable politicians in Wisconsin have proactively thrown law enforcement officials under the bus following use of force episodes. Certainly, Democrat Governor Tony Evers is guilty of besmirching the reputation of law enforcement officials across the state following the officer-involved shooting of Jacob Blake in Kenosha on August 23, 2020. On the same night of that shooting, Evers released a statement saying, “While we do not have all of the details yet, what we know for certain is that he is not the first Black man or person to have been shot or injured or mercilessly killed at the hands of individuals in law enforcement in our state or our country.” Lt. Governor Mandela Barnes followed suit in indicting Wisconsin law enforcement.

After a full investigation – conducted by an outside and independent agency – the officer involved in the Blake shooting was not charged, and was found to be “acting within policy.”

But Evers and Barnes were not the only ones to rush to judgment on the Blake incident. The day after the shooting, Republican gubernatorial candidate Rebecca Kleefisch (my primary opponent) further maligned the officer-involved when she stated: “All I can judge by is the cell phone video that’s been passed around Twitter and Facebook over the last 24 hours. From what I saw, it looked horrific. From what I saw, it was something that scared me and scared my kids … I don’t know what the investigation is going to yield. All I know is what I saw and what I heard, which was far too many shots for a man who had his back turned.”

While former Lt. Governor Kleefisch may today decry Evers as “judge, jury, and executioner” in the case of Kenosha law enforcement, when the pressure was on law enforcement, she folded and issued an uninformed, public indictment of a cop.

To be clear, accountability and transparency are important in professions that use force, such as the military and law enforcement. While an investigation after a use of force incident may be uncomfortable, the transparency helps to build trust. That said, there is nothing worse than doing a dangerous job with a boss who is eager to burn you for mistakes. Look no further than the statements from Evers, Barnes, and Kleefisch to understand our state’s law enforcement recruiting and retention problems.

Today, we continue to see sky-high murder rates, carjackings, and ineffectual District Attorneys – like Milwaukee’s John Chisholm, whose oversight allowed the perpetrator of the Waukesha parade attack free just days after driving over someone else.  I have called for Chisolm to resign, and I pledge to fire him when I am your governor – but it will take a far more comprehensive approach to restore law and order to meaningfully reduce violence in our state.

First, my campaign has announced a ‘Law Enforcement Advisory Team,’ which includes 30 sheriffs from throughout the state. Some of these sheriffs have also endorsed my primary opponent; some have not. I’ve spoken with every single one of these sheriffs, and they support my candidacy. I will continue to call on them for advice as we create further plans to re-establish law and order in our state. The governor of our state should have a relationship with law enforcement leaders from Wisconsin – even if they don’t always agree – and I’m proud to have that process well underway.

Fourth, as your governor, I pledge to have a staff member in my office who will be a direct point of contact for every sheriff and police chief in our state. As I’ve talked to them over the last several weeks, cops have asked me to do this, and I will listen to them. This member of my team will be available 24/7 to all law enforcement leaders in Wisconsin, giving them a direct line to my office so I am up to speed on their challenges, problems, and needs. Leaders know the importance of communication, and it has been far too long since Wisconsin had a governor with a direct line of communication to those who keep us safe.

The last step will be difficult and more complicated. As your governor, I pledge that I will work with the legislature, sheriffs, police chiefs, municipal leaders, and county executives and boards across our state to rebuild and fund our law enforcement departments.

Just how do you turn around poor recruiting and retention? We need strong, moral leadership to rebuild the morale and capabilities of law enforcement.

While I have not walked in the shoes of law enforcement, I have served and put my life on the line as a Marine Corps officer during combat in Iraq and Afghanistan. I know what it is like to do a dangerous job; it is a calling.

Those in the law enforcement profession need training, mission clarity, support and a leader who enforces high standards and accountability – while also standing behind them when they meet those standards. In the case of Wisconsin cops, that means having a governor who will not immediately throw them under the bus when the going gets tough – a governor who has the common sense to say, “I don’t make snap judgments on the basis of cell phone videos taken during use of force incidents. There will be an investigation. I will ensure that it is quick and transparent, and then the judicial process will play out from there, as appropriate.” That’s it. That’s the appropriate response of an informed leader following a use of force incident in our country.

What has our governor, Tony Evers, done about any of this?  Nothing at all. In fact, he doesn’t even have time to talk to the victims of crime in Wisconsin, let alone try to rebuild law enforcement agencies in order to prevent future crimes from happening.

The ideas I have laid out above are real, they are sound, and they will make our state safer. Going forward, I pledge to you: when it comes to your safety and the safety of your family, as your governor, I will never give you cheap, trite talking points. I will work to get to understand the issues that drive our state’s problems, and then develop solutions that actually solve those problems and get our society back on track.

Kevin Nicholson is a businessman and candidate for governor of the state of Wisconsin.  He is the former volunteer president and CEO of No Better Friend Corp., a conservative public policy group in Wisconsin. A combat veteran of the U.S. Marine Corps (Iraq, 2007 and Afghanistan, 2008-2009) he was also a Republican candidate for the U.S. Senate in 2018. Follow him on Twitter @KevinMNicholson.