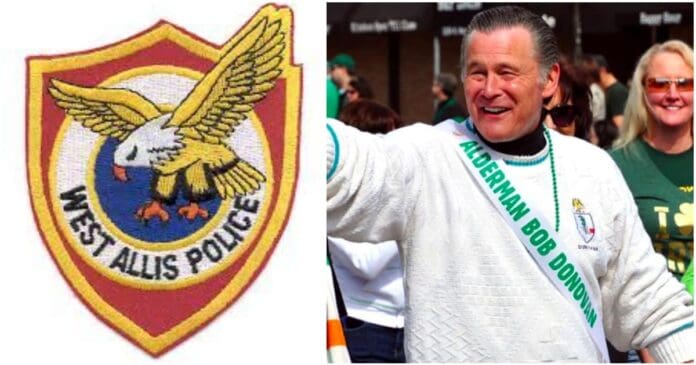 This raises the question, where is the Milwaukee Police Association’s endorsement?

The West Allis Professional Police Association has announced its endorsement of former Ald. Bob Donovan for Milwaukee mayor, touting his “incredible courage” in supporting law enforcement at a time of “shamefully” high crime numbers and a “soft-on-crime” district attorney.

They slammed Donovan’s opponent Cavalier Johnson, the acting mayor, for not recognizing how crime in Milwaukee affects surrounding areas, citing the Waukesha parade attack as an example.

“We appreciate and recognize your unapologetic and unwavering support of law enforcement as well as your strong commitment to a definitive rule of law,” the West Allis Police Association wrote. “This is something that takes incredible courage to publicly proclaim, at the risk of becoming political cannon fodder by those who vilify the men and women who serve in the law enforcement profession.”

Last week, Alderman Ashanti Hamilton, the former Milwaukee Common Council president, endorsed Donovan, urging people to “fight for him like he’s been fighting for us.”

In a letter dated March 14 to Donovan, the Association highlights the exploding crime in the City of Milwaukee and the impact Milwaukee has on surrounding communities.

The West Allis Professional Police Association is proud to endorse your candidacy for the upcoming Special Election for City of Milwaukee Mayor. We are aware that your opponent has questioned your commitment to the citizens of the City of Milwaukee and accused you of pandering to the interests of suburban municipalities. As a first tier suburb and the second most populous municipality in Milwaukee County, West Allis absolutely has a vested interest in the economic success and public safety of Milwaukee.

The City of Milwaukee is the economic and cultural engine of Wisconsin and its successes, as well as its failures, impact the 500,000 other citizens who reside in the surrounding Milwaukee County suburbs. To minimize these causational effects, as your opponent has done, is indicative of his lack of awareness, understanding, and comprehension of the importance of the health and public safety of the greater Milwaukee area as a whole. Like the free flow of commerce, the criminal element similarly has the unfettered ability to cross jurisdictional boundaries. What your opponent fails to either realize or admit, is that the City of Milwaukee and virtually all Milwaukee County suburbs, such as the City of West Allis, are inextricably linked both economically and socially.

The dedicated law enforcement officers throughout Milwaukee County put their personal safety and lives at risk everyday to ensure those who choose to commit crimes are brought to justice. Unfortunately, all too often, this has turned into a catch and release system due to an elected District Attorney who espouses a soft-on-crime criminal charging philosophy. Most notably, this dangerous practice had a direct and deadly impact on those who were killed and injured during the 2021 Waukesha Christmas Parade.

We appreciate and recognize your unapologetic and unwavering support of law enforcement as well as your strong commitment to a definitive rule of law. This is something that takes incredible courage to publicly proclaim, at the risk of becoming political cannon fodder by those who vilify the men and women who serve in the law enforcement profession.

Please accept our Association’s donation to your campaign. We wish you luck and success in your candidacy for the next Mayor of Milwaukee. If there is anything we can do to publicly support your candidacy, please let us know.