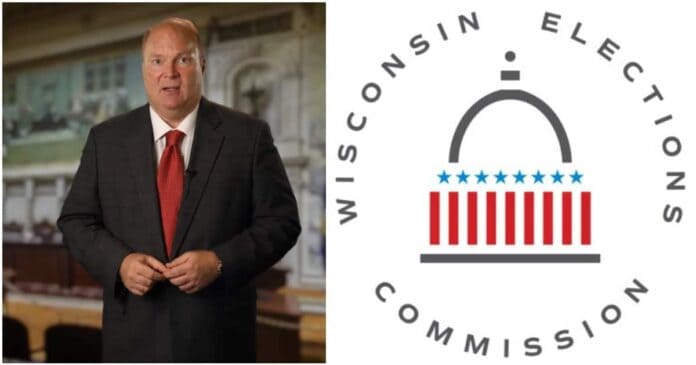 A series of entities – from a non-partisan audit bureau to an elected sheriff – previously identified similar serious problems and actions that ran counter to state law. Gableman’s findings build on a previous body of work that found the Wisconsin Election Commission operated outside of state law.

Yet the media are trying to drive a narrative by singling out and fixating on Gableman’s analysis of decertification of the 2020 election; the former state Supreme Court justice offered a competing legal analysis to previous analyses that say it would be unconstitutional to do so. Although he said the Legislature should take a “hard look” at decertification, he also said that “any decisions in that vein must be made by the elected representatives of the people, that is, the Wisconsin Legislature.” Gov. Tony Evers called Gableman’s work a “circus” and “embarrassment.”

Thus, what you may not know from that news coverage is that Gableman outlined very serious problems in Wisconsin’s elections.

Gableman made a series of substantive, serious, and thoughtful recommendations in his report, including disbanding the extremely partisan Wisconsin Election Commission and creating a “single Statewide Voter Registration Database” that is publicly available and secure. Gableman wrote that public faith in elections has been “largely a function of opaque, confusing, and often botched election processes that could have been corrected, and still can be corrected.”

Gableman found that the Wisconsin Election Commission – led by major Joe Biden donors/partisan Democrats Ann Jacobs and Mark Thomsen – exhibited “a pattern of misconduct… that rose to new heights during the 2020 election cycle, in which new election-related policies were spread throughout the state (such as the expanded use of unlawful ‘drop boxes’ and the fraudulent use of the ‘indefinitely confined’ status) without having been approved by either the administrative rule-making process, ensuring that changes in law are vetted in properly noticed public meetings, or by receiving a majority vote of the Commission.”

The Wisconsin Election Commissioners under scrutiny have previously denied wrongdoing.

He wrote that a purpose of the report was to “catalog the numerous questionable and unlawful actions of various actors in the 2020 election.”

Here are 8 serious problems that Gableman found in the election You can read the full report here.

Some “unlawful conduct and irregularities” outlined in the Gableman report include:

2. The Center for Tech and Civic Life’s $8,800,000 Zuckerberg Plan Grants being run in the Cities of Milwaukee, Madison, Racine, 8 Kenosha and Green Bay constituting Election Bribery Under Wis. Stat. § 12.11 (he also found that “Safe Voting Was a Pretext—The Real Reason for (Center for Tech & Civic Life) WSVP Grants was to Facilitate Increased In-Person and Absentee Voting in Specific Targeted Areas Inside the (Mark) Zuckerberg 5.”);

4. The Cities of Milwaukee, Madison, Racine, Kenosha and Green Bay engaging private companies in election administration in unprecedented ways, including tolerating unauthorized users and unauthorized uses of WisVote private voter data under Wisconsin
Elections Commission (WEC) policies, such as sharing voter data for free that would have cost the public $12,500;

5. As the Racine County Sheriff’s Office has concluded, WEC unlawfully directed the municipal clerks not to send out the legally required special voting deputies to nursing homes, resulting in many nursing homes’ registered residents voting at 100% rates and many ineligible residents voting, despite a guardianship order or incapacity. He further noted,

“WEC’s unlawful activities facilitated and encouraged possible widespread criminality and election fraud. Aside from the fact that they were legally and morally wrong, these acts led to 100% voting rates in many nursing homes in Brown, Dane, Kenosha, Milwaukee and Racine Counties and incapacitated people voting statewide. Given that there are approximately 92,000 residents of facilities governed by Wis. Stat. §6.875 statewide, the fact that tens of thousands of illegal ballots from these facilities were counted casts doubt on the 2020 Presidential election result.”

6. Unlawful voting by wards-under-guardianship left unchecked by Wisconsin election officials, where WEC failed to record that information in the State’s WisVote voter database, despite its availability through the circuit courts—all in violation of the federal Help America Vote Act.

Gableman further noted, “In violation of its federal and state legal obligations, Wisconsin election officials failed to prevent non-citizens from voting in the 2020 Presidential election—casting doubt on the election result.”

8. Wisconsin election officials’ and WEC’s violation of Federal and Wisconsin Equal Protection Clauses by failing to treat all voters the same in the same election.

The Gableman report noted, “This Report flags systematic problems with voting in elder care facilities, an issue that was also recently blown wide open by the Racine County Sheriff.”

He also wrote, “As of the date of this Report, the voting machine companies have refused to comply with the OSC’s [Gableman’s] legislative subpoenas, and have provided no data. The OSC considers this investigation incomplete but ongoing. The OSC also sought information about the machines in Wisconsin used on election night from the clerks. The clerks either did not possess the data sought by the OSC or refused to provide it, with Green Bay and Madison insinuating that providing secure voting machine data to the OSC would somehow compromise election integrity.” His investigation is ongoing.

In his report, Gableman highlighted how Democratic Wisconsin Attorney General Josh Kaul and “left-wing groups” have sought to block public knowledge of the election process.

What did Gableman say on decertification? His legal analysis runs counter to other analyses relied upon by the state Legislature.

Here’s a passage Gableman wrote on the decertification question the media are fixating on:

“In 2020 in Wisconsin, the certification of its Presidential election spanned two steps and to a large extent operated in a legal vacuum. First, on November 30, 2020, Wisconsin Elections Commission (WEC) Chairperson Ann Jacobs, on her own and without a fullCommission vote, signed the ‘determination of the recount and the presidential contest.’

This unilateral action led one of the sidelined Commissioners to call for Jacobs’ resignation. Second, a few hours later, Governor Tony Evers certified the results of the state’s November 3 election by signing the Certificate of Ascertainment that approved the slate of electors for President-elect Joe Biden and Vice President-elect Kamala Harris. Neither the WEC Chairperson nor the Governor had an incentive to proceed with greater deliberation and address the serious concerns of citizens and other Commissioners. This is a serious gap in the legal structure governing elections that should be corrected as far in advance of the 2024 presidential election as possible.”

The appendix to the Gableman report states, “It is clear that the Wisconsin Legislature could lawfully take steps to decertify electors in any Presidential election, for example in light of violations of state election law that did or likely could have affected the outcome of the election.”

He added: “This Report has documented not just one, but a great collection of Wisconsin election law violations. As a political matter, the actions of state actors certifying electors in any Presidential election can be reconsidered as the Wisconsin Legislature sees fit using its plenary power under Article II of the federal Constitution…”

He noted that “two legal analyses from Legislative Council and the Legislative Reference Bureau argue that various events on that five-step process timeline, coupled with silence or the lack of specificity in various sources of law, means that state legislatures cannot decertify.” He doesn’t agree with that analysis.

Gableman’s analysis runs counter to previous analyses relied upon by the state Legislature and comments from Republican legislative leaders and a Republican candidate for Attorney General.

The Wisconsin Legislative Council memo, which you can read here in full, found that decertification violated the U.S. Constitution, saying in part,

“Impeachment is the only mechanism for the involuntary removal of a U.S. President who is capable of performing the duties of office.  There is no procedure for reversal of an Electoral College vote and no mechanism for ‘undoing’ a congressional declaration of the winning presidential candidate. The Twentieth Amendment to the U.S. Constitution provides that the U.S. President takes office on January 20, after swearing an oath of office contained in U.S. Const. art. II, s. 1, cl. 8. Once that has occurred, Congress must conduct an impeachment before the President may be removed from office.”

“…Not only is it illegal, it’s just plain unconstitutional,” Assembly Majority Leader Jim Steineke, a Republican, said in a previous tweet. “As chair of the Rules Committee, there is ZERO chance I will advance this illegal resolution. #EndofStory”

“I support identifying any fraud or election laws not followed to ensure it never happens again because elections are the cornerstone of our democracy. The Attorney General should be a leader in this effort but Josh Kaul has failed to do so, which is why we need a prosecutor, not a politician as our ‘Top Cop.’ The amount of misinformation and faulty legal opinions circulating makes it difficult for many to know who or what to trust but the fact is there is no constitutional or legislative mechanism to decertify the 2020 presidential election. We must channel this frustration into cleaning up our election laws and winning in November, not dividing our party.”

Madison.com has reported that Toney “is prosecuting more election fraud cases than any other district attorney in Wisconsin.”

He told WRN that he wants a legislative change to allow the district attorney to seek injunctions to stop illegal election problems before ballots are cast.

In a public hearing after the Gableman report was issued, Gableman said that the state should take a “hard look” at decertifying the election; that’s despite the fact that legislative attorneys have said it can’t be done.