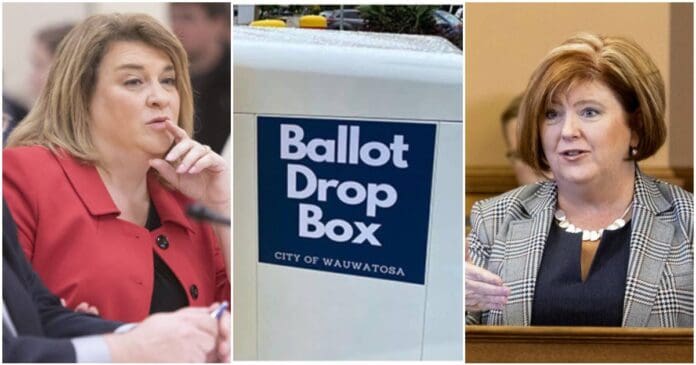 State Rep. Barbara Dittrich believes the Assembly’s passage of the “Monday Count Bill” will help boost voter confidence by cutting down on middle-of-the-night ballot dumps that have raised questions in voters’ minds about election integrity.

The bill passed the state Assembly.

The bill that passed the Assembly would require central count locations to begin processing absentee ballots from 7 a.m. until 8 p.m. the day before the election.

The bill also added new reporting mandates. Clerks would be required to post updates on the total number of absentee ballots and how many are ballots are counted throughout the day on election day.

However, Rep. Dittrich offered a strong defense of the bill.

WRN reached out to State Representative Barbara Dittrich (R-Oconomowoc) for her take on the bill. Dittrich says she supports the bill because the bill calls for ballots to be fed into the ballot machines. She said the ballots will not be tallied nor reported until after the polls are closed.

Dittrich believes the bill will help boost voter confidence by cutting down on middle-of-the-night ballot dumps.

Dittrich addressed concerns about information being transmitted “on the internet”. She said that the reality is that modems transmit the machine tallies directly to the county clerk’s office. A canvas is then conducted to confirm the paper ballots match the machine count after the election.

Brandtjen was sharply critical of the bill in a press release. “After spending a full year not getting access to original ballots, ballot envelopes, tabulators, or tabulator modems from the very cities that AB 946 would affect, including Milwaukee and Green Bay, why would Republicans wish to pass this ill-advised amendment on SB 946?” she said.

“The last-minute amendment written in large part by Senator Bernier, grants early access to absentee ballots by entering ballots in the tabulators the Monday before elections. Counting the ballots should be driven by security not speed. Why would we want to give bad actors the chance to see ballots prior to Election Day?

Milwaukee and other central count locations have not given Republican poll workers equal
access to wards or central count. The biggest challenge for transparency is who is in the counting room, not when the ballots are counted. In addition, these cities impose restrictive “vaccine mandates” and various other tricks to limit Republican participation. The public trust in our election process is already unacceptably low. Again, why would we give bad actors an extra day to cheat?”