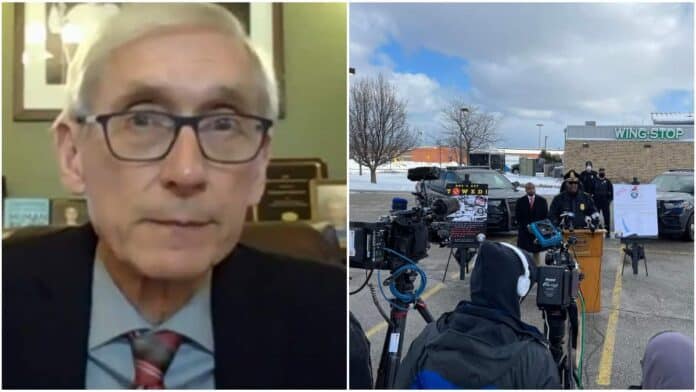 With homicide exploding to unprecedented levels in his state’s largest city, Gov. Tony Evers revealed that he can’t remember whether he met in-person with any Milwaukee homicide victims’ families. Looking like a proverbial “deer caught in the headlights,” Evers blamed his “busy schedule” and then brought up meeting with victims of the Waukesha parade attack.

We would state the obvious and note that the Waukesha Christmas Parade attack did not occur in Milwaukee.

There have been 33 homicides in 2022 in Milwaukee year-to-date, according to the City’s crime dashboard, compared to 16 in 2021. That’s a 106% increase, and it comes after two-years of historic highs.

Furthermore, Evers dodged a question about whether he supports eliminating cash bail, like his Lt. Gov. Mandela Barnes, a Democrat running for U.S. Senate against Sen. Ron Johnson.

Here’s the video of Evers’ comments, which occurred under questioning by reporter A.J. Bayatpour, Capitol Bureau Chief at WKOW 27.

Declining to take a stance on what the state's bail system should look like, @GovEvers says he wants to hear more voices.

I asked when he last spoke to the families of murder victims in Milwaukee. He mentioned the Waukesha Christmas Parade victims. pic.twitter.com/oE9JJQ0T43

“A spokesperson for Lt. Gov. Mandela Barnes says he still supports eliminating cash bail altogether. Do you agree with that?” Bayatpour asked Evers.

“Well, there’s nothing either coming to my desk that I know of or part of any resolution or Constitutional change so I don’t anticipate having to make that decision so that’s his position. It’s not necessarily mine. My only position is that we have all the people at the table before we decide what is right and wrong,” rambled Evers.

Bayatpour responded, “So right now you don’t have an opinion on whether cash bail should exist?”

Bayatpour then asked the governor: “Milwaukee, as much has been said, has experienced record levels of homicide, the last two years now. When is the last time you in your capacity as governor had an in-person conversation with the family of a murder victim in Milwaukee?”

Responded Evers: “I’m not sure, I, Well, I did in the Waukesha occasion. I met with uh with several of the families there. I may have before that uh but I, you know, I have a busy schedule. But the fact of the matter is most recent interaction with someone who uh lost their lives uh was the Waukesha area… In my work on pardons and so on, I know I have communicated with folks on that.”

Former Lt. Gov. Rebecca Kleefisch, who is running for the Republican nomination to square off against Evers, tweeted, “Tony Evers has plenty of time for pickle ball and his liberal priorities, but no time to deal with Wisconsin’s violent crime. He’s a weak leader who isn’t serious about the pressing issues facing our state.”

Tony Evers has plenty of time for pickle ball and his liberal priorities, but no time to deal with Wisconsin’s violent crime. He’s a weak leader who isn’t serious about the pressing issues facing our state. https://t.co/eVEFSlOweu