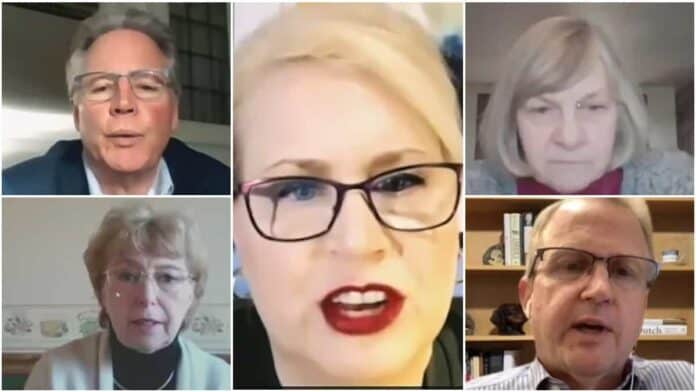 Racine County District Attorney Patricia Hanson is declining to file criminal charges against five members of the Wisconsin Election Commission, but that’s only because she says she lacks jurisdiction. They don’t live in Racine County. However, she blasted the Election Commissioners, saying they exceeded their authority under the law, writing, “I have spent considerable time reviewing this case and what occurred in Racine County. It is appalling to me that an appointed, unelected group of volunteers, has enough authority to change how some of our most vulnerable citizens access voting.”

Patricia Hanson concluded: “I am of the opinion that the WEC exceeded any authority granted to it by the legislature. Additionally, the internal checks and balances of municipal clerks making lists of residents from each facility who had actually requested absentee ballots for the SVDs to verify, was eliminated.”

Racine County Sheriff Christopher Schmaling, who referred the criminal charges to Hanson, previously asked the state Attorney General, Josh Kaul, a partisan Democrat, to investigate. But Kaul, a Joe Biden supporter, has already slammed the probe as a “publicity stunt.” Local DAs would need to give Kaul jurisdiction for him to take the case, though.

“The Attorney General should be investigating these allegations, but Kaul continuously refuses to defend or clarify our election laws. It’s another failure on Kaul’s part. As Attorney General, I would investigate and coordinate with local district attorneys to ensure they have all the resources needed. I would also agree to take on the prosecutions if requested by the local district attorneys,” said Toney.

Patricia Hanson’s letter was a withering criticism of the actions of the five members of the Wisconsin Election Commission.

In her letter to Schmaling, Patricia Hanson made it clear that she did not think the probe was a publicity stunt; rather she found that the commissioners operated outside of the law.

Where Do the WEC Members Live?

Bob Spindell was not part of Schmaling’s referral because he opposed the WEC’s actions.

Schmaling referred felony charges against the five commissioners, saying they blatantly and openly violated state law and committed felony crimes throughout the state of Wisconsin by ordering that special voting deputies should not go into nursing homes during the 2020 presidential election, as required by statute.

“Sheriff Schmaling, After receiving referrals from your agency requesting charges be filed against the Wisconsin Elections Commissioners for their specific conduct of eliminating the use of Special Voting Deputies (SVD) in care facilities in elections held in 2020, I have to decline to issue charges because I do not have jurisdiction,” Hansen wrote Schmaling on Feb. 11, 2022.

“Wis. Stat. §978.05(1) is clear that criminal actions regarding election violations proscribed by Chapters 5 to 12, must be prosecuted by the prosecutorial unit, or county, where the alleged defendant resides. None of the WEC members reside in Racine County. Let me start off by saying that I am disappointed that my hands are tied by this jurisdiction issue.”

Patricia Hansen continued, “Dispensing with the mandatory process created by the legislature of using sworn and trained SVDs to assist citizens in nursing homes, directly led to what occurred at Ridgewood Care Center in Racine County. Residents who did not request ballots voted because someone else made a request for a ballot on their behalf and then voted on their behalf. If even one person’s right to freely choose to vote or not to vote was diminished, then a travesty of justice has occurred.”

“The Rule of Construction for Wis. Stat. Chapters 5 to 12 can be found at Wis. Stat. §5.01. It says that except as otherwise provided, Chapters 5 to 12 shall be construed to give effect to the will of the electors, if that can be ascertained from the proceedings, notwithstanding informality or failure to fully comply with some of their provisions. The will of the electors here was disrupted and substituted in its place were the efforts of untrained and unsworn nursing home staff. The decisions of the WEC, eliminating the assistance of SVDs to request and return ballots for those in nursing homes and care facilities, gave license to at least two nursing home employees that we know of who improperly requested and returned ballots on behalf of residents.”

Continued Patricia Hansen, “The process of selection of SVDs can be found on the WEC website: Special Voting Deputies (SVDs) are appointed by the municipal clerk to bring absentee ballots to qualified care facilities. The two major political parties may submit a list of potential SVDs to the municipal clerk. If lists are submitted, then SVDs who represent each of the political parties must be selected from the lists. No person who is or was in the last two years employed or retained at a qualified facility, or is a member of the immediate
family of such an individual, may serve as an SVD. Wis. Stat. § 6.875(4)(b).”

Special Voting Deputies shall arrange one or more convenient times with the administrator
of the facility to conduct absentee voting for the election. The SVDs shall contact the
administrator of the facility as soon as possible, but no later than 5:00 p.m. on the sixth
working day before an election. Absentee voting may be conducted no earlier than the
fourth Monday before the election and no later than 5:00 p.m. on the Monday before the
election.

Prior to sending SVDs to a facility, the municipal clerk should compile a list of occupants at  the facility who have absentee ballot requests on file. This list should be shared with the
facility administrator. The social worker for the facility may be consulted if there is a
question of voter competency. The administrator should survey the occupants on the list
to inform them of the date and time of the SVDs’ visit. The administrator should also note
on the list which individuals will be able to meet the SVDs for voting and which are unable
or unwilling to meet the SVDs at the designated time. (Emphasis Added)

The purpose of this process is so that at least two SVDs, sworn and trained election officials, are present at each nursing home while residents request and complete their ballots. The preference is to have one SVD from each political party, but if not one from each party, at least two people to keep eyes on one another when guiding care facility residents through the process. The goal of having two people is to insure that both are following the rules proscribed by the legislature.

The WEC made its own determination that SVDs were “non-essential” and advised municipal and county clerks around the State of Wisconsin not to send the SVDs to the care facilities. None of the emergency orders issued by the Governor specify that SVDs were to be considered “non- essential” personnel. In fact, the “Safer at Home Order” issued by the Governor and DHS Secretary Andrea Palm makes it clear that government employees whose jobs are to protect the fundamental rights of Americans, were in fact, essential. Judges, court personnel, law enforcement, and correctional staff were all deemed “essential”. How can we say that the right to vote is any more or less important than any other rights afforded to us under the Constitution and Bill of Rights?

In March of 2020, restrictions regarding who could go in and out of nursing homes came from the US Department of Health and Human Services, and was adopted in Wisconsin by the WI Department of Health Services. Both of these agencies issued guidance for care facilities, no orders or rules. In addition, within the guidance, there were suggestions on how to handle essential contact with care facility residents. Allowing the SVDs into care facilities would have meant two people would have needed to go inside care facilities to meet with a limited number of residents who wanted to, and were able, to request their ballots. Two people who could have followed the same guidelines as essential staff to protect the residents of the care facility and also insure that the integrity of this important election process was upheld.

Instead, the WEC relied on Wis. Stat. §6.875(6)(e), the statute that applies if the SVDs make their two required visits to the care facility and a willing resident is not able to cast their ballot, for whatever reason. The WEC used what was intended to apply to particular voting residents and created a blanket rule to apply to every care facility in the whole state. The argument by the WEC is that the SVDs would have come twice to the care facilities, knocked on the care facility door and would have been turned away, so they just eliminated the process all together. I am of the opinion that the WEC exceeded any authority granted to it by the legislature. Additionally, the internal checks and balances of municipal clerks making lists of residents from each facility who had actually requested absentee ballots for the SVDs to verify, was eliminated.An SVD who might question voter competency was not present. Eliminating the use of SVDs under the misguided idea that SVDs were “non-essential” allowed the number of absentee ballots returned to the Village of Mt. Pleasant at this one care facility to go from an average of 10 before November of 2020, to 42 in November 2020. New requests for absentee ballots prior to the November 2020 averaged between 0 and 3. In November of 2020 there were 38 new requests.
These numbers are too significant to be ignored.

There are cases from the Wisconsin Supreme Court, Sommerfield v. Board of Canvassers of the City of St. Francis, 269 Wis.2d 299 (1954) and Lannser v. Koconis, 62 Wis.2d 86 (1974), that would seem to suggest in certain circumstances, the “shall” in the Wisconsin elections statutes can be construed to mean “may”. Specifically, the cases examine the method of delivery of a ballot that was properly requested and executed by an elector. These cases are very different than the circumstances of what happened at Ridgewood Care Facility and I am of the opinion, are not controlling here. We have no way of knowing if the ballots that were sent to Ridgewood Care Center were properly requested or executed and following the investigation by the RASO, we have good reason to believe that they were not. This is certainly contrary to Wis. Stat. §5.01. I am in no way suggesting that the WEC or the Ridgewood Care Center staff in any way tried to influence how the residents at their facility voted. To the contrary, neither of us has any idea how the residents of Ridgewood Care Center voted. What I do know is that at Ridgewood Care Center, ballots were requested and votes were cast by residents who did not, and could not, have requested a ballot.

Despite knowing that what they were doing was contrary to law and despite being told by the Governor’s Office that they were exceeding their authority, the WEC instructed municipal and county clerks to eliminate the SVD process for elections in 2020. Proof of this comes directly from the recordings of the WEC meetings that can be found on their website and their recorded meetings. As for the employees of Ridgewood Care Center that you submitted charges for, I am going to use my discretion to decline prosecution. It would be unfair for me to expect that these health care. professionals would better understand the election laws in Wisconsin than the Wisconsin Elections.”