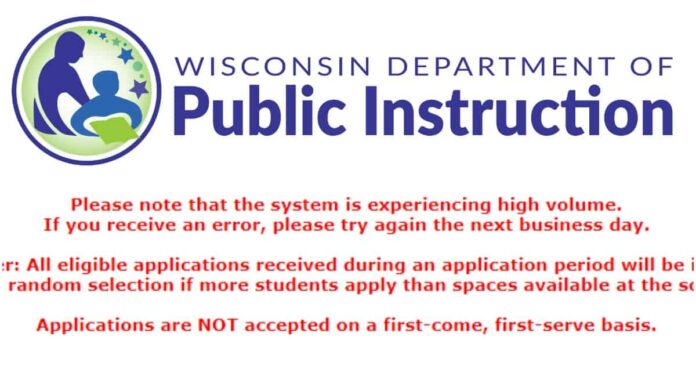 The state Department of Public Instruction told Wisconsin Right Now that its school choice application page crashed “due to a technical issue arising from a high volume of visitors accessing the application portal.” A local school told parents it was due to a “major coding issue” and was the “first time they (DPI) have ever experienced this long of a website shut down.”

We contacted DPI to ask why the school choice web page crashed after hearing from parents that it was down Wednesday morning as well as Tuesday. The web page is now back up, but, on the evening of Feb. 2, it still contains a message that reads, “Please note that the system is experiencing high volume. If you receive an error, please try again the next business day.”

DPI Communications Director Abigail Swetz initially said only that DPI is “in the process of determining what caused” the school choice web page to crash. “The DPI is currently looking into what caused the issues. Our team worked to get the system back online, which it currently is,” she said.

St. Marcus Lutheran School in Milwaukee sent a message to affected parents. Around noon on Feb. 2, 2022, they wrote, “We have been hoping that the Department of Public Instruction (DPI) would have fixed their technical difficulties by this time. Unfortunately, we’ve been informed that there is a major coding issue in their systems and it is taking longer than expected to resolve the issue. This is the first time they have ever experienced this long of a website shut down…”

St. Marcus noted: “Though the Department of Public Instruction has not given us a specific timeframe that the website will be back up, please know that the St. Marcus Enrollment Team is committed to helping all St. Marcus families complete your applications fully and secure your seats for next year.”

When we asked about schools saying they were told the school choice web page crashed due to a coding issue, Swetz followed up and said: “In communicating with schools who have contacted our team, we have told them the application portal being down is due to a technical issue arising from a high volume of visitors accessing the application portal when it first went live on Tuesday.”

We previously reported that Tuesday was the first day for parents to enroll in the state’s Private School Choice Program. By midday, the state’s website crashed because of a flood of applications. “Due to high volume, the system is temporarily unavailable,” DPI wrote in a note on the page. Enrollment figures from last year showed more students enrolled in Wisconsin’s four school choice programs, as parents continue to express concern about critical race theory and public schools’ pandemic rules.

Jim Bender, of School Choice Wisconsin, said a deeper issue than the website crashing is the fact the “enrollment and application process make it incredibly cumbersome” for parents to enroll in choice.

He noted that “DPI is statutorily required to administer the program” and said “it’s not the first time there’s been technical issues. Clearly having a system that works flawlessly is not a priority for the department.”

Bender said the web page being down is just another “hurdle” when it comes to an already complex process to access the programs. “It’s putting up more barriers to families finding options that are best for them,” he said.

We asked whether the application portal has crashed before, and what was done to ensure it wouldn’t happen again, and Swetz said, “The online application system was down in 2019, and our team made fixes on the system and ran tests to confirm those issues were resolved. The system worked as expected with no issues the past two years.”

We asked if DPI is concerned the issues will deter parents from applying, and she said, “The DPI does not believe this will deter parents from applying or impact participation in the Choice program during the 2022-23 school year. As a reminder, all eligible applications received during an application period will be included in the random selection if more students apply than spaces available at the school. Applications are not accepted on a first-come, first-serve basis.”

She said DPI can’t tell how many applications it’s received so far because “the application just opened yesterday and our system encountered some issues.” Thus, she said, “we are unable to compile this information at this time.”

We asked if the deadline will be extended due to the school choice web page crash.

We reported over the weekend that former Gov. Tommy Thompson recently pushed for school choice for all who want it.