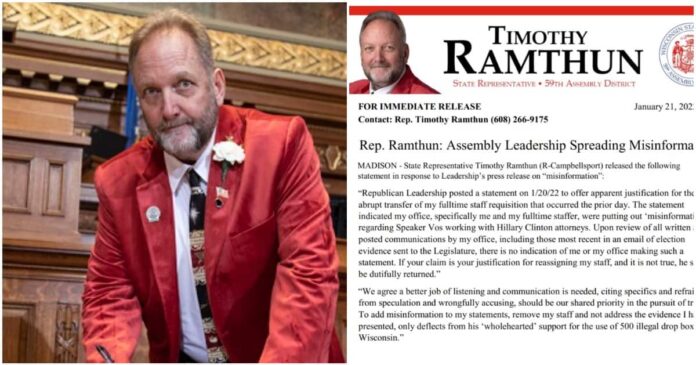 “Republican Leadership posted a statement on 1/20/22 to offer apparent justification for the abrupt transfer of my full-time staff requisition that occurred the prior day,” he wrote.

Rep. Timothy Ramthun’s release comes after Republican Assembly Speaker Robin Vos stripped Ramthun, a Republican from Campbellsport, of his staff member this week. The Republicans in Assembly Leadership then sent out an extraordinary letter obtained by Wisconsin Right Now, which you can read in full below, defending Vos and accusing Timothy Ramthun and his staffer of spreading “lies.” Read the Assembly Leadership letter and get the background here.

“The statement indicated my office, specifically me and my full-time staffer, were putting out ‘misinformation’ regarding Speaker Vos working with Hillary Clinton attorneys. Upon  review of all written and posted communications by my office, including those most recent in an email of election evidence sent to the Legislature, there is no indication of me or my office making such a statement.”

“If your claim is your justification for reassigning my staff, and it is not true, he should be dutifully returned. We agree a better job of listening and communication is needed, citing specifics and refraining from speculation and wrongfully accusing, should be our shared priority in the pursuit of truth. To add misinformation to my statements, remove my staff and not address the evidence I have presented, only deflects from his ‘wholehearted’ support for the use of 500 illegal drop boxes in Wisconsin.”