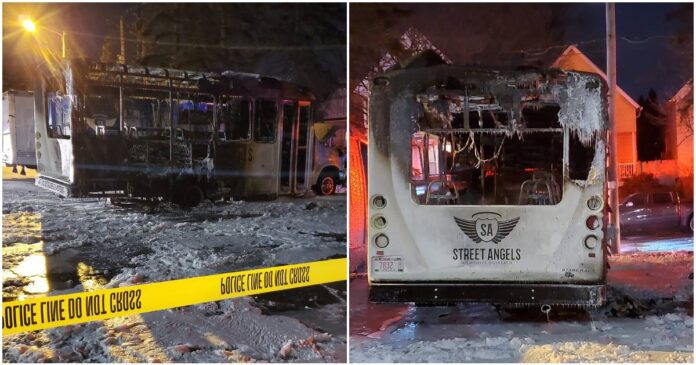 Street Angels, the homeless outreach organization in Milwaukee that caused recent controversy by closing its warming rooms due to COVID-19, had its bus torched on January 20.

Shelly Sarasin, co-founder and director of Street Angels, shared the news, along with photos, on the group’s Facebook page.

The photos show that the Street Angels bus was completely destroyed by fire. 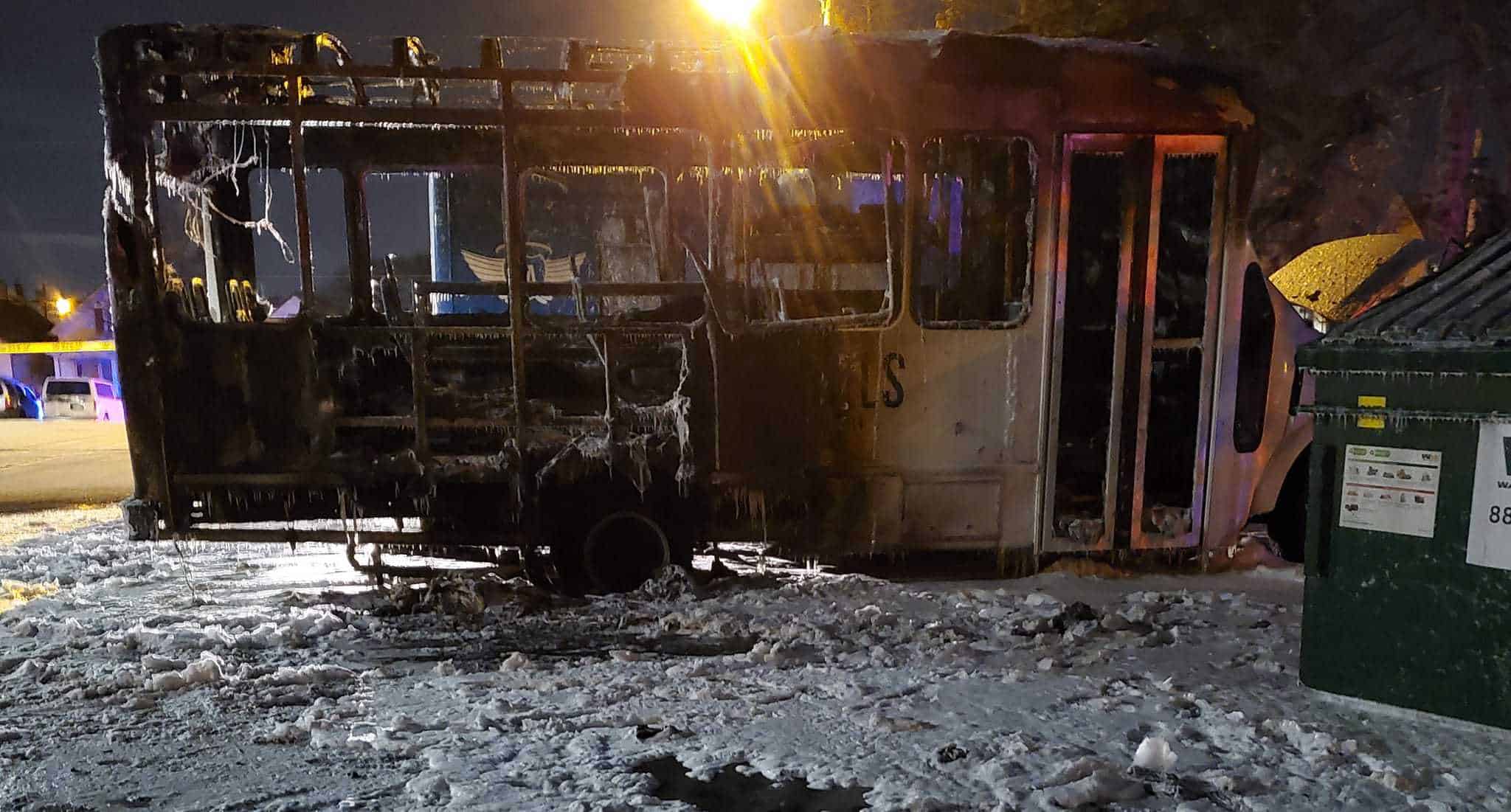 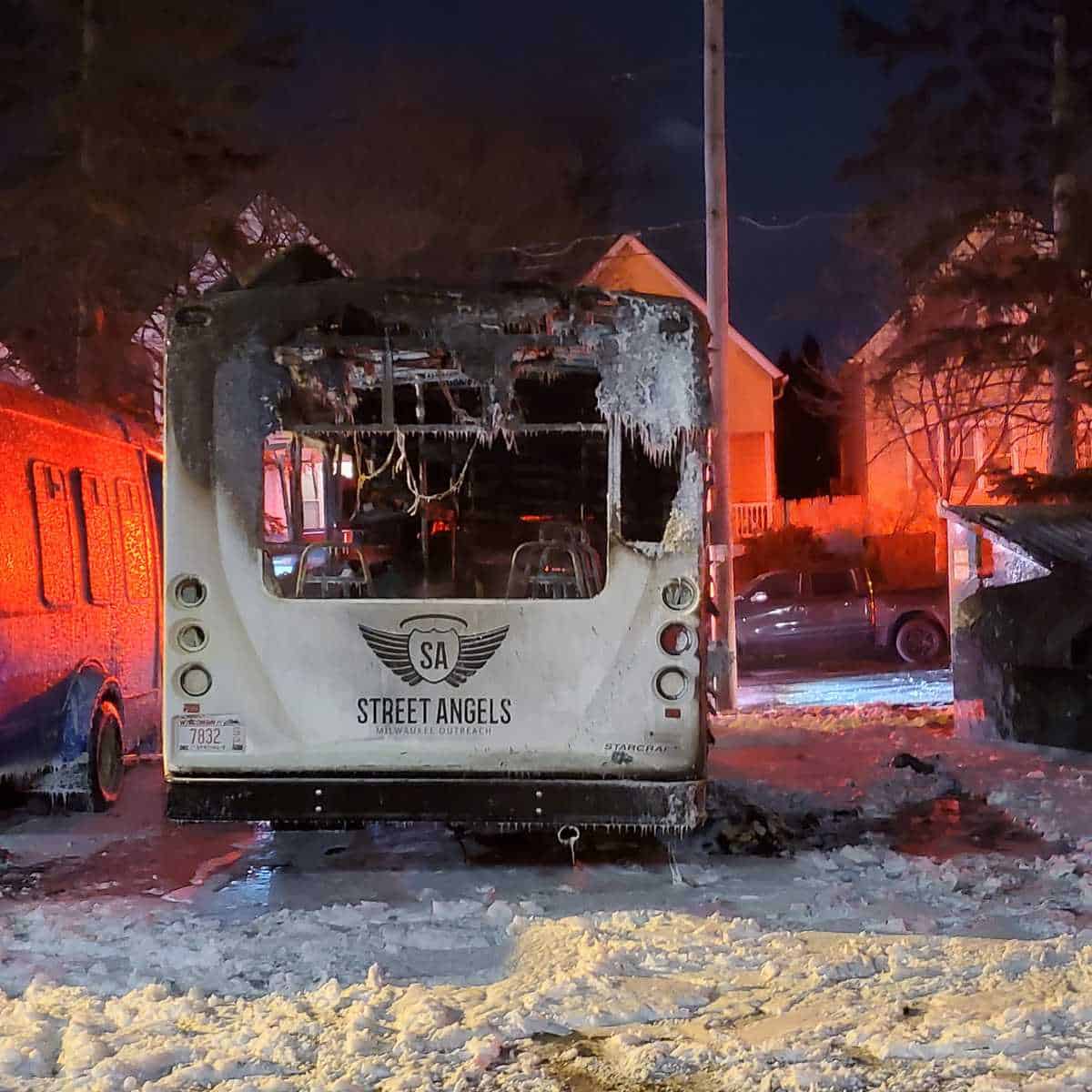 “We wish we knew why. Why would someone do this? Today we are left heartbroken and simply devastated,” she wrote on January 21, 2022.

“At 10:45pm, shortly after serving our community and our unhoused neighbors, we received a message that our buses were on fire. The fire department arrived in a matter of minutes as the station is right across the street, but sadly there wasn’t much they could do. Today we will assess our blue bus and figure out our next steps. One thing is certain, you WILL see us back out on the streets to serve our friends on Sunday. Many thanks to our neighbors for letting us know, and to the Milwaukee Fire and Police Departments. Out of these ashes, HOPE will arise.”

Shortly before the fire, CBS 58 published a story about Street Angels’ volunteers going out in cold temperatures to help homeless people to give out meals and gloves. “Street Angels’ two buses loaded with food and warm clothes cruise the city three times a week, looking for people who need help,” that story explained.

People expressed upset on the group’s Facebook page. “So angry at whoever did this….your mission is to help the homeless who can be mad at that & destroy that mission?” wrote one. “OMG This breaks my heart and angers me all at the same time! Who, why so many questions !! You guys worked so hard to get these buses this is devastating,” wrote another.

We reached out to Milwaukee police for more details and to see if there is a suspect. The motive is unclear.

Street Angels provoked some anger recently with its decision to close warming rooms to homeless people due to COVID-19. The group also took to Facebook to explain that decision, writing, in a lengthy post:

“We understand some people do not agree with our decision to close the warming room and that is understandable. Making the choice to close the warming room was extremely difficult for us. While this new variant may be mild for some, this is not always the case for those who are vulnerable. Also, regardless of how mild symptoms are, staff and volunteers cannot return for a minimum of 5 days and guests then need to go to an isolation unit.

This new variant also has a decreased immunity time so it started to become a vicious cycle. It came down to the point where we had no staff to keep the doors open, some of us were working 20plus hour days, one night we had only one female staff member because we had no-one else available (that staff member was me because there is no way I would put anyone else in that situation). It became unsafe in various ways and simply put, we tried our absolute best.”

We worked with the health department and lead of infectious disease control and we tried to make the space as safe as we possibly could. But, covid was striking guests, volunteers and staff on a daily basis. Our goal was to give people a safe space and sadly, at the rate Covid is being transmitted right now, the decision was made that a congregate setting without proper ventilation is not safe for anyone. Pardon my French but, we were damned if we do, and damned if we don’t.”

“Street Angels Outreach beats the street to help those who need it most,” the organization explains on its Facebook page.

“With community support the Street Angels are able to go out three nights a week and bring basic necessities such as food, clothing, blankets, and hygiene items to many of the homeless population in Milwaukee. The team goes where ever they are needed in the city and also give hope, compassion, and friendship to many that otherwise might have no one. Working together with other community organizations and other outreach teams Street Angels are making a difference in the lives of individuals and the community.”