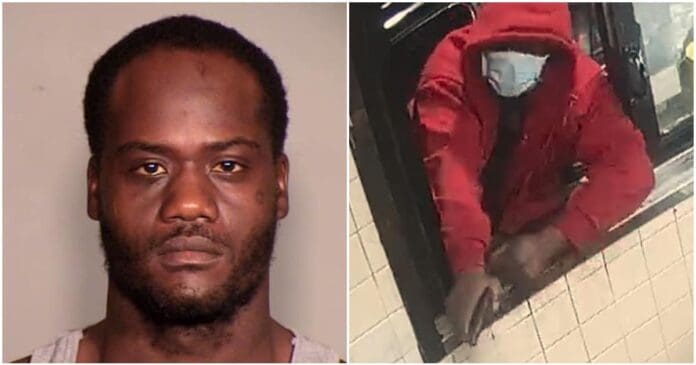 Derrick Ellis was charged with one count of Possession of a Firearm by Outstate Felon. If convicted, he could face up to 10 years in prison and could be fined up to $25,000.

On Thursday, January 6, 2022, the Milwaukee County District Attorney’s Office issued criminal charges against Derrick D. Ellis in connection to the homicide of 16-year-old Niesha Brazell, who was shot and killed while working at a Milwaukee Burger King restaurant on Sunday, January 2, 2022.

The shooting occurred at approximately 10:12 p.m., on the 5100 block of W. Capitol Drive. “Ellis was armed with a firearm and engaged an armed robbery suspect,” Milwaukee police wrote in a statement. “During the confrontation, Ellis’ coworker was struck by gunfire, which caused her death. Ellis is a convicted felon and prohibited from possessing a firearm. Ellis fled the scene.”

Video captured the armed robbery suspect in the drive-thru window with a handgun.

Derrick Ellis was charged with one count of Possession of a Firearm by Outstate Felon. If convicted, he could face up to 10 years in prison and could be fined up to $25,000, MPD wrote.

“The Milwaukee Police Department continues to seek Ellis as well as the unknown armed robbery suspect. The unknown suspect is described as an African American male with a heavy build. He was last seen wearing a red hooded sweatshirt, tan pants and was armed with a handgun. He was driving a black 4-door Chevy Impala with a sunroof and spoiler on the back,” wrote MPD.

The criminal complaint against Derrick Ellis says that he is a convicted felon out of Berrien County, Michigan.

On Jan. 2, 2022, police in Milwaukee responded to a shooting at the Burger King. The physical evidence and video footage showed that the shooter “was an employee inside the restaurant, which had just closed. The shooter appeared to be firing towards a man at the drive-thru window who was attempting to rob the cashier.”

After the shooting, “a male employee crawls on the floor collecting fired casings,” the complaint says. “this same male employee then meets with the restaurant manager, who opens a safe in the office, and the male employee places a white object into the safe.”

Police interviewed the store manager who identified the male employee as Dwight Ellis. She said that Ellis carries the gun while he is at work and was carrying in on that day. After the shooting, Ellis asked her to hide the gun in the safe because he was a felon and could not possess it, the complaint says. It says officers found a white .380 caliber pistol inside the safe.

Derrick Ellis was convicted in Michigan of attempted second-degree home invasion in 2014, the complaint says.