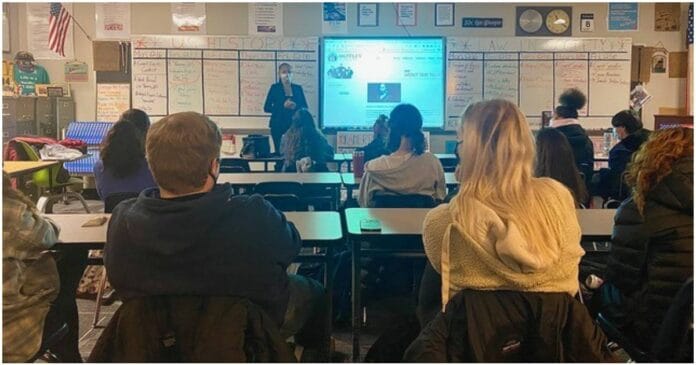 The PowerPoint failed to mention that Alvin Cole had a gun that discharged or that Jay Anderson was reaching for a gun, or that Antonio Gonzalez was wielding a large sword when they were all shot. It doesn’t say that multiple reviews cleared the officer in those cases, either.

We’ve obtained the PowerPoint that pro-BLM attorney Kimberley Motley used during her recent talk to students in a Wauwatosa High School class, and it shows she painted the Wauwatosa police as racist.

The PowerPoint, which you can see in full below, also shows that Kimberley Motley’s PowerPoint presentation to Wauwatosa high school students was misleading and one-sided – misleading through what she did NOT include in it. For example, she brought up the three men shot and killed by former Wauwatosa Police Officer Joseph Mensah, but the PowerPoint doesn’t tell the students all of the three had dangerous weapons and that Mensah was cleared by multiple reviews, including the local DA. Her presentation also included the personal phone number of the Wauwatosa police union president.

Motley, who has been vitriolically critical of Wauwatosa police and behind numerous legal actions against them, brings up Rep. David Bowen (D-Milwaukee), positioning him as a victim of police, but doesn’t tell the students that he was at the scene of a violent attack against Mensah by affiliates of the BLM-aligned group whose members she has represented. She doesn’t tell students about that violent attack (which resulted in felony charges against People’s Revolution members) or that Bowen was accused by other people at the scene of lying to the public about it. 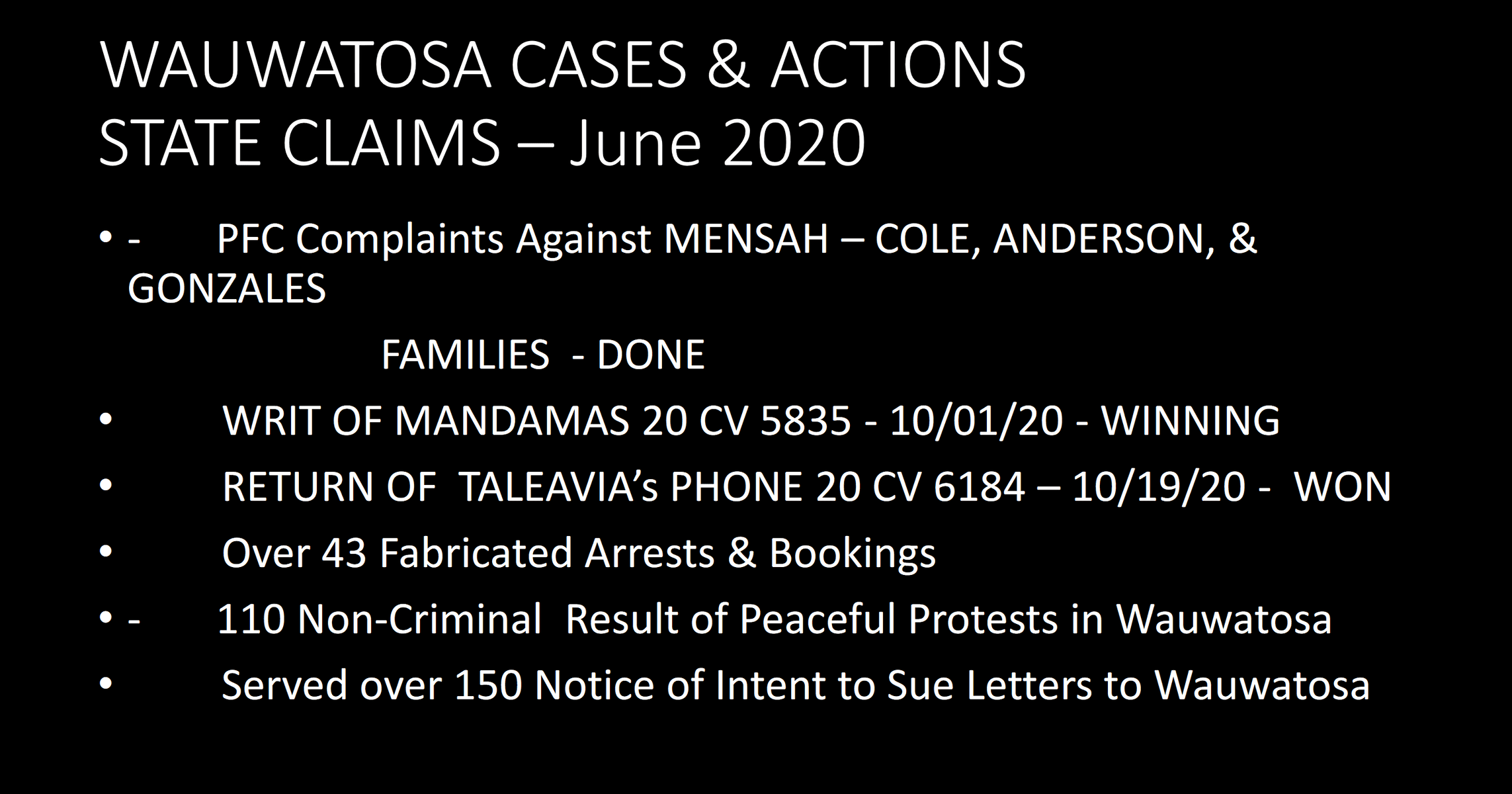 Kimberley Motley framed the protests as “peaceful,” without revealing that stores were looted, glass broken, and items tossed at police, who were subjected to vile verbal abuse for months.

In short, how would an impressionable teenage student sitting in the class know the full story? Or would they come away with dangerous and false impressions of Wauwatosa police? 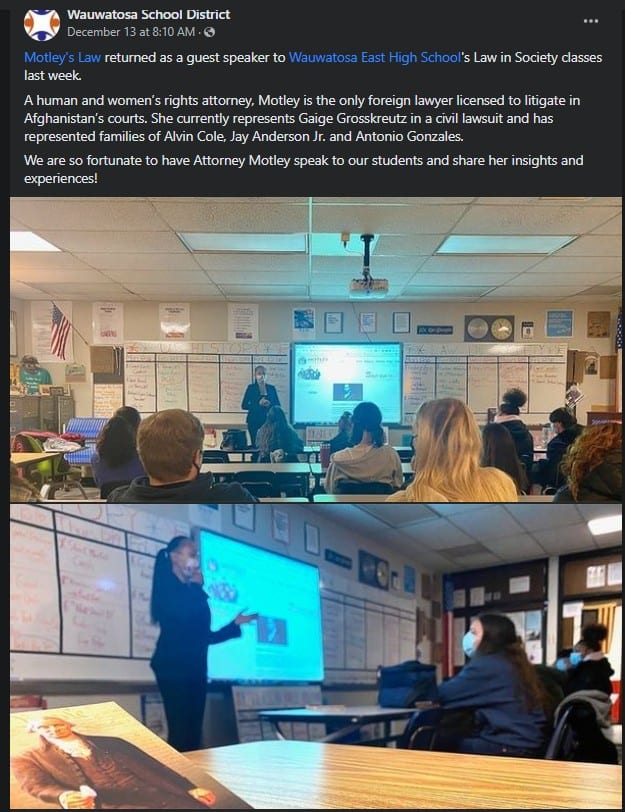 The PowerPoint was obtained via an open records request sent to the Wauwatosa School District by a Wauwatosa resident who gave it to Wisconsin Right Now. Wauwatosa Schools touted Motley’s talk on Facebook, saying she had “returned as a guest speaker to Wauwatosa East High School’s Law in Society classes last week.”

It calls her a “human and women’s rights attorney” and reveals she represented Gaige Grosskreutz, without noting that he was the man armed with a gun with an invalid permit who was shot by Kyle Rittenhouse in a shooting ruled self-defense. It then lists the three men Mensah shot, without saying they were armed or that he was cleared.

The response to the citizen’s open records request from Superintendent Demond Means was dated Dec. 15, 2021. It reveals that Michael Fischer of the Wauwatosa East Social Studies Department “requested the attendance of Attorney Kimberley Motley. Mr. Fischer has been in the District since 1998. Mr. Fischer followed the Wauwatosa East process for securing a guest speaker. The high school principal, Nick Hughes, approved the guest speaker.”

We contacted Fischer and asked why he chose Kimberley Motley to speak, whether he’s concerned about the misleading nature of her presentation, and what he’s doing to make sure students get the whole picture. He didn’t respond.

You can read Fischer’s bio here.

It reads, “I have enjoyed being an educator since 1998. I started teaching at Longfellow Middle School and have been teaching at Wauwatosa East since 2012. I graduated from the University of Wisconsin-Milwaukee with a double major in Geography and Sociology. I have also achieved my teaching certification in Broad Field Social Studies, History, Geography, and Sociology. In addition, I successfully attained my Master’s degree in Educational Psychology at UW-Madison.

This program at UW-Madison has been recognized by U.S. News and World Report as one of the top Educational Psychology programs in the nation, and I am extremely delighted to have completed this degree to help further myself as an educator. I have been the current Wauwatosa East Boys and Girls Track and Field Hurdles Coach since 2012. I have also coached hurdles at Wauwatosa West High School for fourteen years.”

Here’s an excerpt from the superintendent’s response to the concerned citizen: 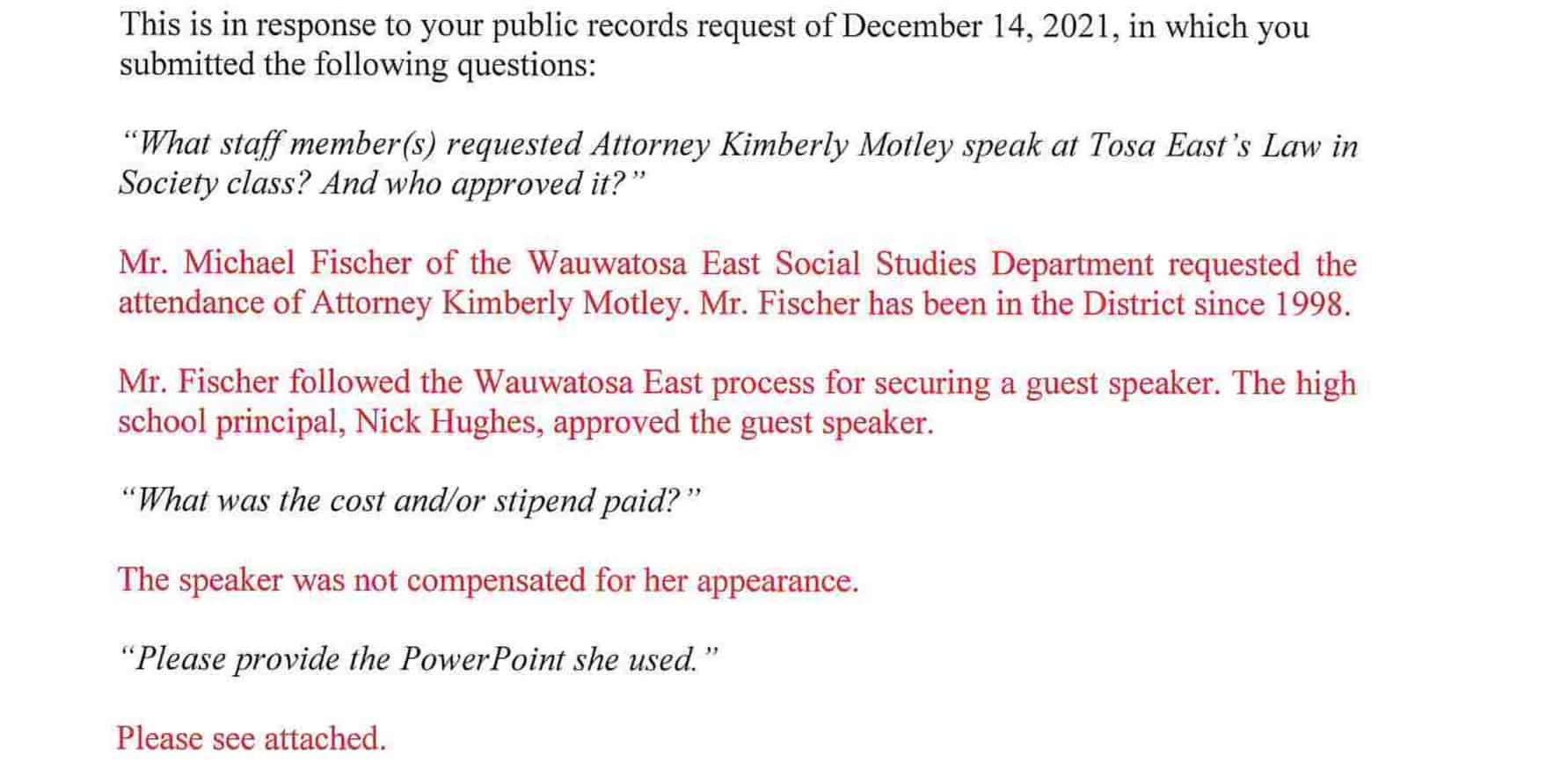 Kimberley Motley was not compensated for her appearance, Means said.

The Wauwatosa resident asked the school district whether “there are any plans by this teacher to have a speaker with an alternate political point of view? i.e. perhaps Kyle Rittenhouse attorney? Or a member of the Wauwatosa Police Department who can speak on what to do if you get pulled over?”

The citizen asked whether “a conflict of interest check” was “done on Attorney Motley? She currently has lawsuits against the City of Wauwatosa.”

Means replied, “It does not appear that district policy #1130 (conflict of interest) would apply to this guest speaker. The fact that the speaker is involved in lawsuits against the City of Wauwatosa does not prohibit her from speaking to a class in the Wauwatosa School District.”

The first part is about Afghanistan. The PowerPoint contains explanations of the Afghanistan penal code and chapters from the Quran. “A person, defending his honor, who sees his spouse, or another of his close relations, in the act of committing adultery or being in the same bed with another and immediately kills or injures one or both of them shall be exempted from punishment for laceration and murder but shall be imprisoned for a period of not exceeding two years, as a ‘Tazeer’ punishment,” it says.

The PowerPoint then moves on to Wauwatosa police.

One page contains the photos of the three men shot and killed by Joseph Mensah (again, he was cleared) and the hashtag “Justicefortheethree.”

It says that Antonio Gonzalez was given an “award” but doesn’t say he was wielding a large sword when the officer shot him or that the DA ruled the shooting justified.

It then shows old newspaper articles from 1990 accusing the Wauwatosa police of racism by holding Martin Luther King Day theme parties in 1988 and 1989.

Motley also included an email from John Milotzky, the Wauwatosa union president for police, who was trying to fight the release of a personnel file. The email included Milotzky’s personal cell phone number, which WRN has redacted from the powerpoint presentation below.

She includes a document showing an “arrest” of state Rep. David Bowen and labels it “fake.” This is the so-called “ghost arrest” issue that Motley previously made a big deal out of in the media.

She indicated she had served over “150 notice of intent to sue letters to Wauwatosa” and accused the department of “over 43 fabricated arrests.”

The page contains the line, “110 non-criminal result of peaceful protests in Wauwatosa.”

She told the students a judge – whose ex-wife works with Motley on the Anderson case – found probable cause that Mensah committed homicide in the Anderson death. But the PowerPoint doesn’t reveal the judge’s alleged conflict of interest, nor does it say that federal authorities and the local district attorney have already cleared Mensah in that case.