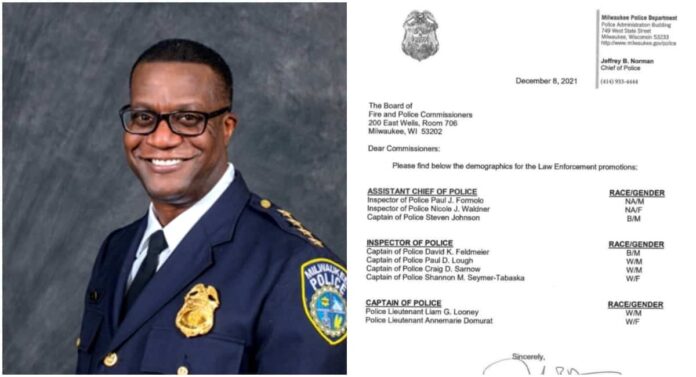 Milwaukee Police Chief Jeffrey Norman sent a letter to the Board of Fire and Police Commissioners announcing the names of officers he wants to promote – and he included the race and gender of each. It’s the first time this has been done, the police say the FPC requested it, and it’s causing an uproar throughout the department.

No Hispanics made the Milwaukee Police promotion list. This comes after the illegal mistreatment of Chief Alfonso Morales, who was Hispanic, by the FPC.

We’ve been told by retired and current officers that there is a concern promotions are being made to satisfy an equity and inclusion agenda by the mayor’s office and FPC. Some officers don’t believe those on the list are the most qualified for the positions. 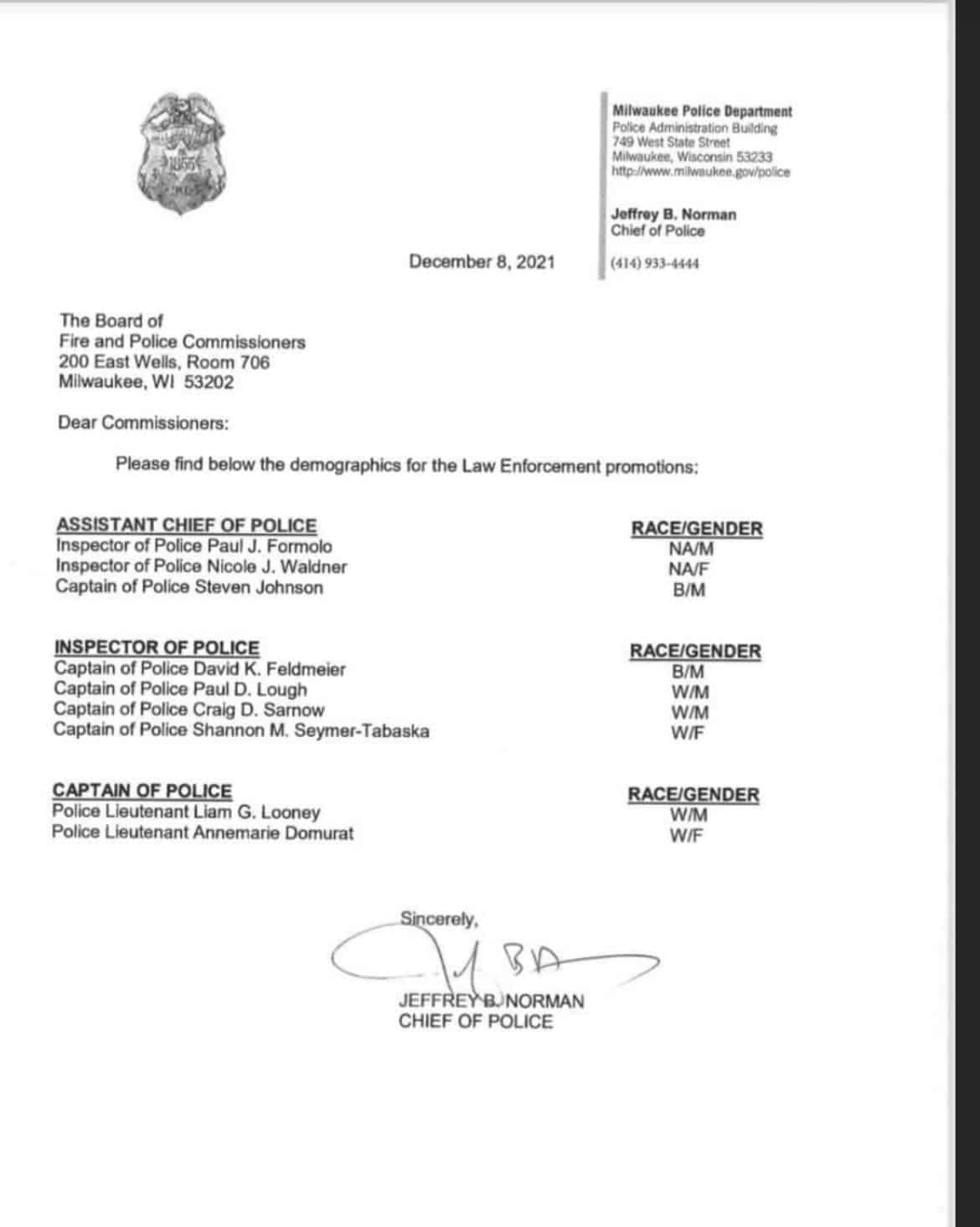 In his letter to the commissioners, he stated that the 10 people up for promotion “represent a diverse group that I am confident will substantially improve the Milwaukee Police Department by being truly representative of our community. Of these 10 individuals, 50% are white, 30% are black and 20% Native American, with 60% male and 40% female.”

Speaking of diversity, the Fire and Police Commission is overrepresented by blacks and Hispanics; 57% of the commissioners are black; 29% are Hispanic; and 14% white.

The numbers are wildly skewed from the department’s demographics in recent years. In fact, the promotions are closer to the percentages of minorities and women in the city as a whole than in the department, increasing the belief that qualifications were not the overriding or only factor.

Efrain Cornejo, MPD spokesman, told WRN: “The promotions were based on merit and an interview process with the candidates, and neither race nor gender played a role in the decision-making process. The race and gender demographics were provided at the request of the Milwaukee Fire and Police Commission.”

He added: “All promotions have to be approved by the FPC; that is why they are on the agenda. This is the first time this was requested.”

We contacted the FPC and haven’t received a response.

“Please find below the demographics for the Law Enforcement promotions,” the Dec. 8, 2021, letter says. It then lists three candidates for assistant police chief, four candidates for inspector of police, and two candidates for captain of police. After each candidate, Norman listed their “race/gender.” 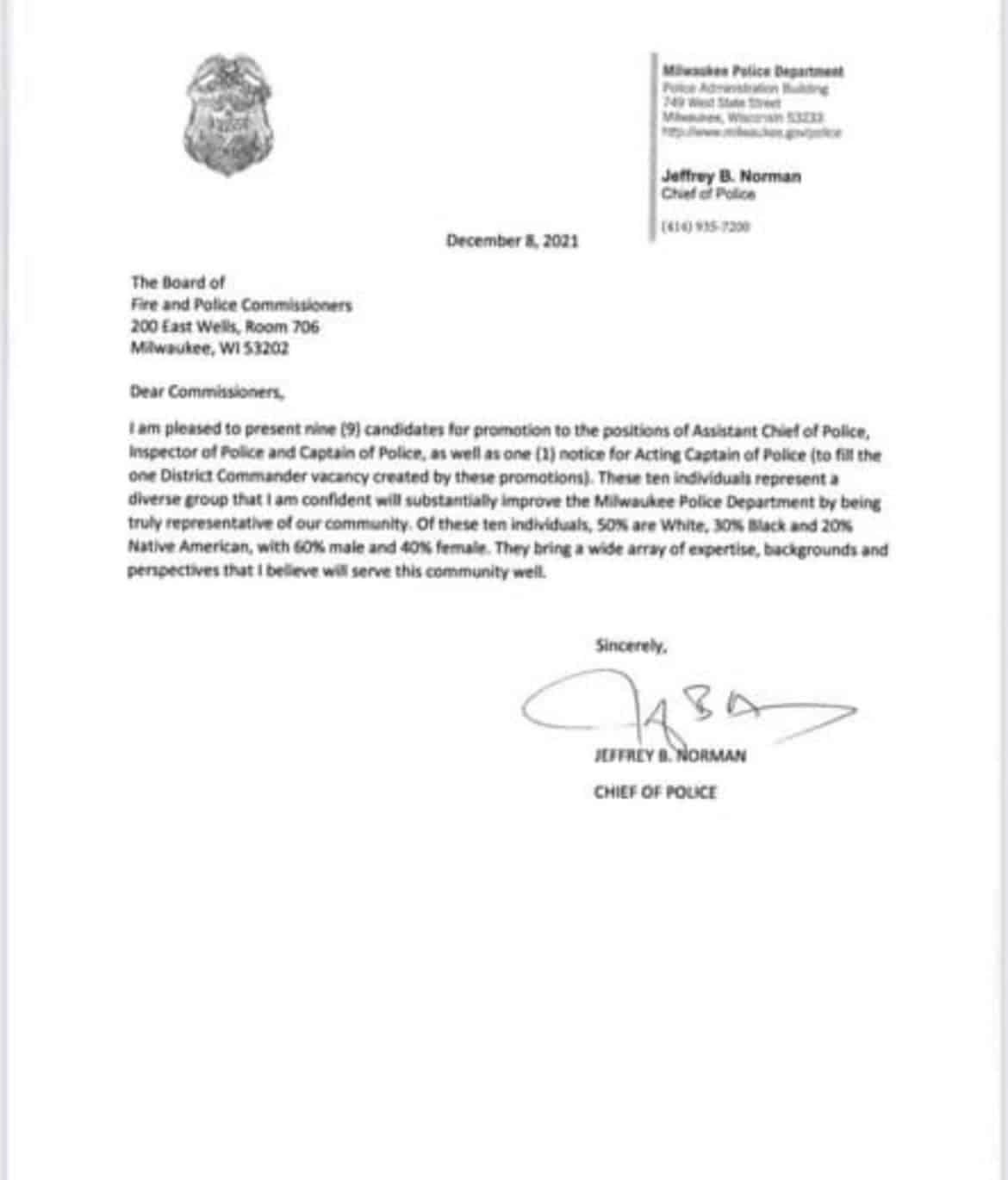 The first black officer on the force was Judson Waller Minor Jr., appointed in 1924. The first Hispanic lawyer was Procopio Nick Sandoval in 1964, according to a dissertation by Antonio G. Guajardo jr.

“Interestingly, in looking at the statistical information from 1990 to 2000, the MPD seemed to diversify its police force at a higher rate than the national average,” he said. “The diversification of MPD included the hiring of minority police chiefs; however, the number of incidents of uses of force in minority communities, especially the African American community, did not seem to decrease.”

Over the years, there have been suits and countersuits on MPD, diversity and promotions.