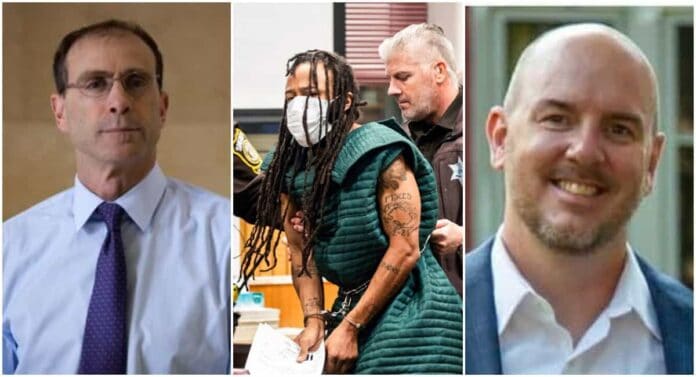 The Milwaukee Court system is STILL limiting how many courtrooms can conduct jury trials, despite a judge setting Darrell Brooks’ bail at $500 in a pending felony case because he couldn’t give him a trial due to court congestion.

Milwaukee County Circuit Judge David Feiss said in Darrell Brooks’ bail hearing for a February 2021 shooting case that he was setting Brooks bail at an amount so low – $500 – that he hoped it “gets him out,” referring to the man later accused in the Waukesha parade massacre.

“I can tell you that I’m setting it at that amount with the hope that Mr. Brooks is able to post that amount. That gets him out, but also provides some community protection,” David Feiss said during the court hearing.

Brooks did get out. And he got out again after being charged with another felony case in Milwaukee County. He was free on bail in both still-pending cases at the time of the Waukesha Christmas parade massacre. If the court had been able to try Brooks and Brooks had been convicted and sentenced, he may not have been free to commit the massacre.

But Judge David Feiss, a former prosecutor, made it clear why he wanted to make sure he set bail at a figure Brooks could afford to post: He said that courts were only operating at close to 25% capacity at the time of the bail hearing, in February 2021, because officials weren’t holding any trials on Wednesdays; as a result, he expressed concern about the court system’s inability to meet Brooks’ speedy trial rights as his jury trial had been delayed again and again.

That’s according to a transcript of the bail hearing requested by Wisconsin Right Now from the court reporter, Kelly Janowski.

“And I guess for the record under 971.10 I’m going to find that certainly court congestion is a factor today but it’s not the sole factor, and that’s the reason for the court continuing cash bail at a reduced amount,” Feiss said. “As prosecutors have pointed out to me when I indicated we were at 50 percent trial capacity, compared to pre-Covid we are actually closer to 25 percent because we don’t set any Wednesday trials. So the inability to try Mr. Brooks’ case, as I indicated court congestion is a factor but it’s not the sole factor.”

Feiss outlined the many delays in the case at the bail hearing. 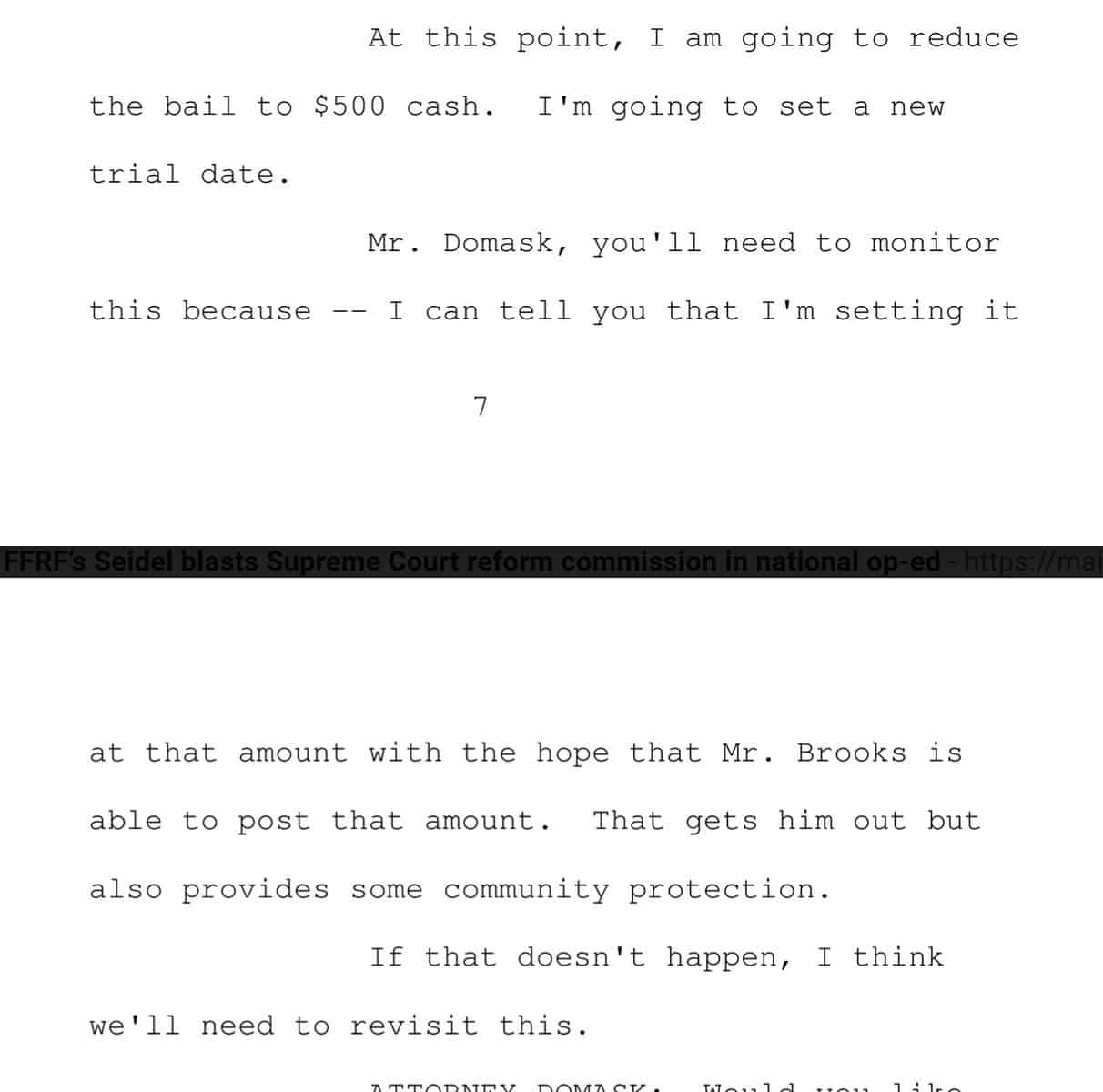 We have found other cases in which David Feiss has raised similar concerns. For example, Orlando Walker was charged with first-degree reckless injury with a dangerous weapon and being a felon in possession of a firearm in June of 2020. His case remains pending.

Bail was originally set at $75,000 cash. As the case wound through the court system slowly, Feiss reduced his bail to $35,000. Feiss denied the defense’s request to modify bail and tolled speedy trial limits. The state asked for delays for things like new evidence. On June 11, 2021, Feiss allowed Walker to go free on a signature bond. On Dec. 3, Feiss denied a state’s request to increase bail.

We interviewed Milwaukee County Chief Judge Mary Triggiano recently about court scheduling. She said that there are about 350 people in custody seeking speedy trials who have not been given them yet, although not all will eventually go as some might reach deals. She said that judges can toll “time limits” and not honor speedy trials due to COVID-19 and “that was happening in the pandemic.”

Darrell Brooks was one of those cases.

“There is still limited capacity to do jury trials,” she confirmed, stating that there are 10 courtrooms allowed to hold jury trials right now and all of the judges are sharing them. There are 21 criminal judges. She said some courtrooms are too small to social distance.

“The backlog is mostly in the jury trials,” she said because those can’t be handled on Zoom (there is a 1,600 felony case backlog and 3,100 misdemeanor case backlog). Triggiano said all judges will be able to hold jury trials in their courtrooms starting January 3, 2022. She said that scheduling concerns with subpoenas and getting enough jurors plays a role in that delay.

“We were prepared to have all judges do jury trials in their courtrooms and then the Delta variant hit Sept. 7,” she told WRN.

Defendants have a right to a speedy trial under the 6th Amendment to the US Constitution. The 6th Amendment reads, “In all criminal prosecutions, the accused shall enjoy the right to a speedy and public trial…” The felony charges for shooting at a car carrying a relative were filed against Brooks in July 2020, but even to this day, the case is still pending. He posted the $500 bail on Feb. 26, 2021. There was a pretrial services violation after that date in the Feiss case, and a new felony charge in November before the parade, but bail did not increase, and he wasn’t charged with bail jumping before the massacre.

Judge David Feiss said during the hearing that the bail was a “difficult decision” because “these are serious charges. These are serious allegations.” He added, “The other side of that coin is Mr. Brooks entered his speedy trial demand back in August. I have tolled this once. I just don’t think I can continue to toll speedy trial demands indefinitely. You can make the argument that this — our inability to try the case is not due to court congestion because of the limited number of trial dates, but we’ve now set this on a couple of occasions.”

Judge David Feiss explained, “We are on the — We were on the calendar yesterday for speedy jury trial on this case. The court had approximately six or seven speedy trials and detainer cases. The court is currently in trial on a case that was older than Mr. Brooks’ case.” The court picked June 2021 for a new trial date, but that didn’t happen, either. When June came around, the court system still couldn’t give Brooks a trial because of “court congestion.”

In fact, the case was still pending when the parade attack occurred. The court records do indicate the state had made an offer to Brooks; we asked Kaul and Corr was that was and neither responded.

At the time of the parade, Brooks was also out on $1000 set by Court Commissioner Cedric Cornwall for allegedly running a woman over with his car at a gas station, a new case charged about three weeks before the parade massacre. That – as well as Waukesha Court Commissioner David Herring’s refusal to jail Brooks in a child support case despite a lawyer’s request that he do so – left Brooks free to attack the parade.

Cornwall has been reassigned out of criminal court. Feiss is an elected official. 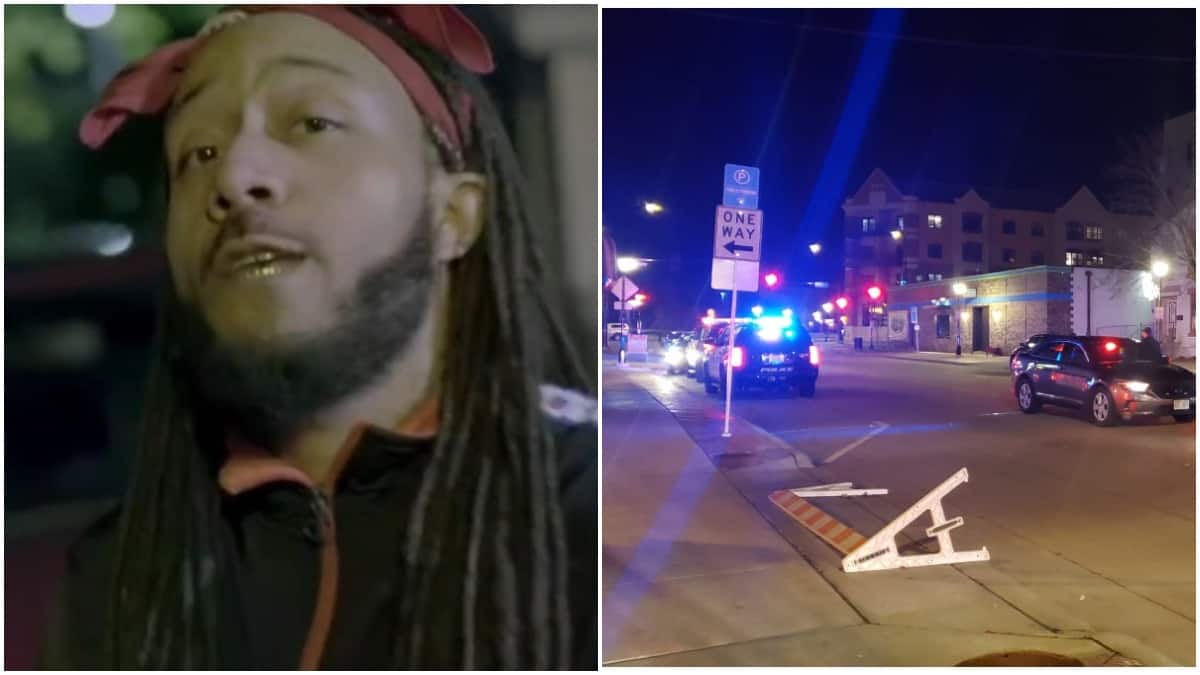 However, the earlier bail hearing presided over by Feiss has been less scrutinized. The hearing transcript reveals how Milwaukee County officials’ court scheduling that limited jury trials due to COVID-19 was a driving factor in the judge’s decision to set Brooks’ bail so low in the felony case.

We’ve previously written about the massive two-year backlog in the court system, caused in part by court officials limiting jury trials to only some courtrooms because of COVID-19.

In addition, although all judges could be back in their courtrooms as of early September, not all are doing in-person court each day, Triggiano said, reading from a judicial rotation that shows this varies widely by judge “1 DV judge is doing in person all week in their assigned courtroom. A homicide and sexual assault judge is doing 3 days out of the 5. 1 judge is doing 2 out of the 5. Another judge that is doing 3 out of 5. Another judge has 5 out of 5 in-person court.” Until Sept. 7, 2021, it was “limited in-person,” and judges were sharing courtrooms as not all were allowed to be open.

The transcript also reveals that a prosecutor who works for Attorney General Josh Kaul appeared at the hearing for the state. He argued that the $7,500 bail already in place for Brooks was “appropriately set.” The prosecutor, Jacob Corr, did not tell the judge that Brooks had an active Nevada warrant as a non-compliant registered sex offender, the transcript shows.

Kaul has received almost no scrutiny in the Brooks’ controversy. Rather, almost all of the focus in the media has been directed at Milwaukee County District Attorney John Chisholm, for his prosecutor’s $1,000 bail recommendation in Brooks’ second felony case (the transcript and recording for that hearing do not exist).

Jacob Corr is an assistant attorney general with the state Department of Justice, which is run by Kaul. He is assigned to help out the Milwaukee DA’s office with violent crimes.

The case in Judge David Feiss’s courtroom was still pending at the time of the massacre at the Christmas parade.

During the hearing, the defense attorney, Joseph Domask, asked for a $7,500 signature bond. That would have meant that Brooks wouldn’t have had to post any cash to get out.

Corr argued that “bail should remain.”

He said: “Judge, I think that bail should remain. I think that it’s not for — I mean obviously the state was prepared to go. The defense was prepared to go. I’ve got two cooperative victims in this case who are very adamant about Mr. Brooks being held accountable for his actions. Both of them want to see Mr. Brooks prosecuted for this case. So they’re concerned about this. Mr. Brooks does have some criminal history albeit mostly kind of — It looks like some DV and drug cases, things like that. He does have it looks like a misdemeanor bail jumping from 2012 which would go to his — kind of his following of court orders. But the state feels that bail is appropriately set.”

This is Brooks’ criminal history in Wisconsin. He also was a registered sex offender in Nevada.

He has a lengthy Wisconsin arrest history. Read it here. It notes that Brooks has an out-of-state felony conviction. 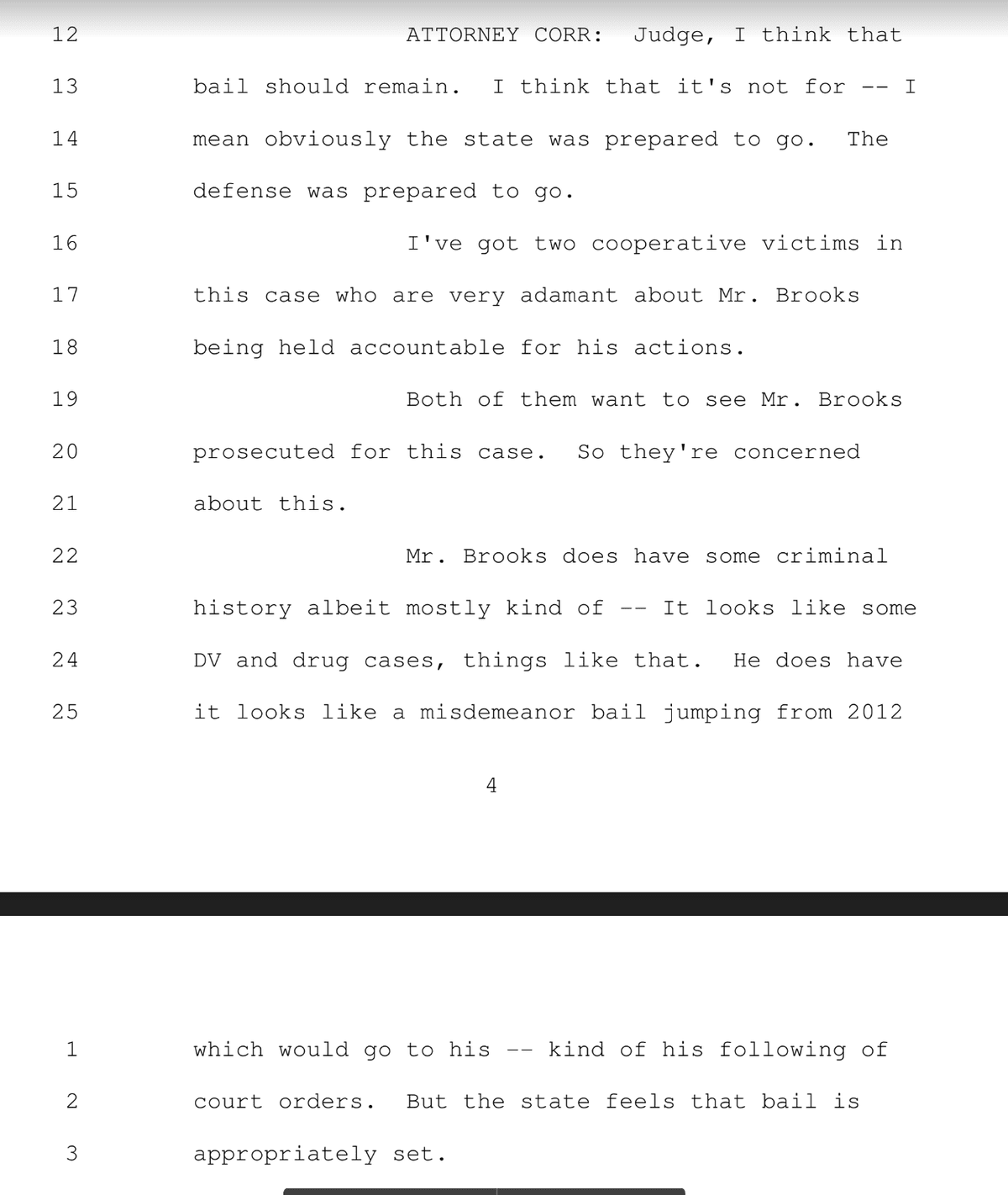 Corr said, “Judge, one other point I would make. Just so the court is aware, from the purposes of the state’s perspective, Mr. Brooks — There is an admission as least as to the felon in possession. So I think that the strength of the state’s case is also something to consider. He does admit that — ultimately admits to firing the firearm, but he denies firing it at the victim. He says he fired it into the ground. Again, that’s something I think the court should be aware of.”

On Feb. 26, 2021, David Feiss held another hearing solely to see whether Brooks was able to post the $500 bail. It was also attended by Corr, but he didn’t argue for higher bail during that hearing.

Defense attorney Domask told Judge David Feiss, “There was some sort of child support issue in Waukesha and he may have been transferred to Waukesha County Jail.” We previously wrote about that case here. It resulted in a court commissioner, David Herring, rejecting a child support attorney for the state’s request to hold Brooks in jail because of repeated non-appearances and non-payment.

Judge David Feiss noted that after checking with his deputy he learned “that their system shows him out on bail on this charge and he did have the Waukesha hold. My suggestion is that we set another status date just to I guess make sure that he’s out and that — Because we have a June 28th trial date.”

Corr did not object and said very little during that hearing.