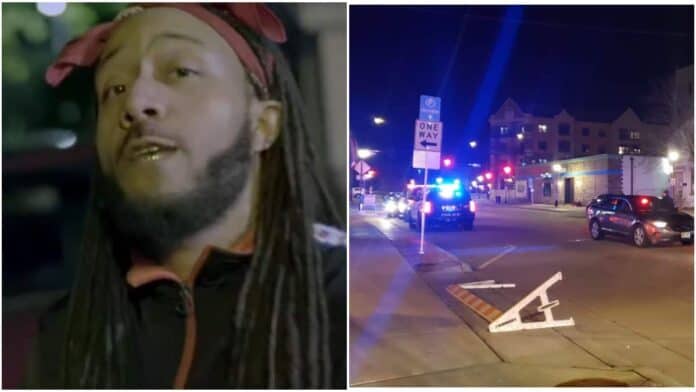 Milwaukee County’s backlogged court system is responsible for the man in custody in the Waukesha parade massacre remaining on the streets more than a year after he was charged with serious felonies, including a gun offense, Wisconsin Right Now has learned.

We’ve learned from scanner audio and other sources that the man in custody in the parade horror is Darrell Brooks Jr. What’s his criminal record? He has two open felony cases in Milwaukee County and a lengthy string of criminal arrests across multiple counties and states.

He’s a 39-year-old felon from Milwaukee County, and the Milwaukee Court system suspended his speedy trial rights due to “court congestion,” releasing him on $500 bail even though he was facing serious weapons and other felony charges.

Then, even though he was socked with a string of new felony charges, he was released again – on $1,000 bail – three days before the parade massacre.

Police haven’t named the Waukesha parade suspect, and the Waukesha police chief would say only that they have a person of interest. The exact role they allege Brooks played in the parade tragedy is not yet clear. They haven’t released a motive either. WRN’s Jim Piwowarczyk went to his Milwaukee north-side home listed on CCAP and found two MPD squads there. A red Ford Escape appears on a Google Maps photo for that home and in one of his rap music videos.

But they said he was in custody in scanner audio.

The ramification? People accused of very serious crimes are remaining on the streets to reoffend. One of them: The man in custody in Waukesha, according to accusations in court.

On social media, he showed animus toward police and Republicans like Scott Walker and posted unhappiness about the Kyle Rittenhouse verdict and George Floyd death. He also quoted Malcolm X. The motive hasn’t been released.

The City of Waukesha says a red Ford Escape drove through the crowds in the beloved Christmas parade, injuring 40 people, including 12 kids, and killing five people.

In June, 2021, the court records contain this passage (our bold), “Matter scheduled for Jury Trial. Parties are ready to proceed. Due to court congestion, Court is unable to hear jury trial at this time. Defense counsel advises Court that there is a new offer and requests a plea hearing date. Case adjourned, Br. 46. Plea hearing scheduled for August 31, 2021 at 09:15 am.”

In February 2021, this entry: “Case set for Status as to Jury Trial. The Court is in jury trial on another matter and makes a record of the history of this case. Due to reasons stated on the record, the court is unable to honor the speedy trial demand in this case. Defense bail motion argued and GRANTED by the Court. The Court lowered cash bail to $500.00. All previous conditions remain. The court TOLLED TIME LIMITS until next court date. Case adjourned, Branch 46.”

His past record consists of bail jumping, marijuana offenses (including felonies), obstructing an officer, and substantial battery. He is a felon.

There is a Darrell Edward Brooks with the same year of birth who is a registered sex offender in Nevada, but it was not immediately clear without a full DOB whether it was the same person. However, he appears to admit to this in a video, saying the victim was 16.

It shows these arrests. Many cases were dismissed.