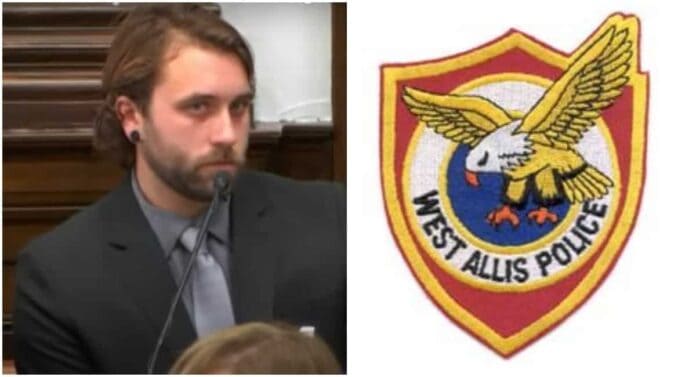 Gaige Grosskreutz, the Black Lives Matter activist shot with gun in hand by Kyle Rittenhouse, was convicted of loitering two days after the Rittenhouse trial started for a separate incident outside the West Allis Police Department, Wisconsin Right Now has exclusively learned.

Grosskreutz was initially arrested for prowling behind the West Allis Police Department a few days before the shooting, according to records received by Wisconsin Right Now through an open records request. The police report accuses him of “lurking” in an area where police keep their private vehicles, videotaping them.

We contacted West Allis municipal court for an update on the ticket after Grosskreutz took the stand and admitted pointing a gun at Rittenhouse while advancing toward him while in close proximity to him. Rittenhouse, who is claiming self-defense, is on trial in Kenosha for the wounding of Grosskreutz, as well as the shooting deaths of Joseph Rosenbaum and Anthony Huber.

The media have not thoroughly explored Grosskreutz’s criminal history. He admitted on the stand that he has a single criminal conviction. That is for misdemeanor intoxicated use of a firearm. He is not a felon. However, he also said on the witness stand that he was carrying a concealed weapon on the night in question but had an expired concealed carry permit. It is illegal in Wisconsin to carry a concealed weapon without a valid permit. He has not been arrested or charged with that though.

However, Grosskreutz, who is suing the City of Kenosha for millions of dollars, also has a history of citations. The most recent: The loitering ticket from West Allis. Here is the record in that case: 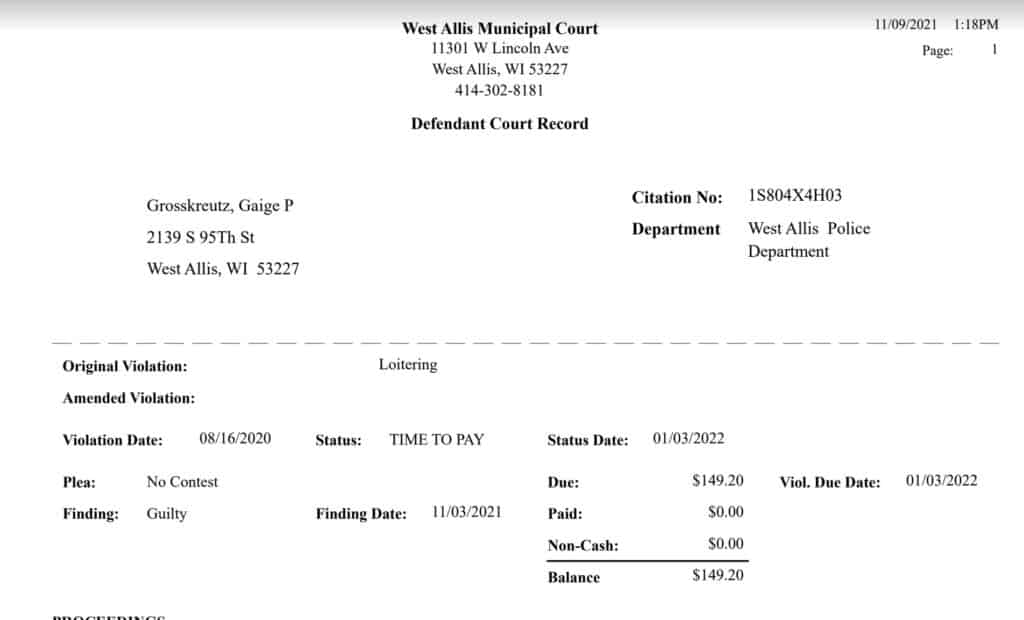 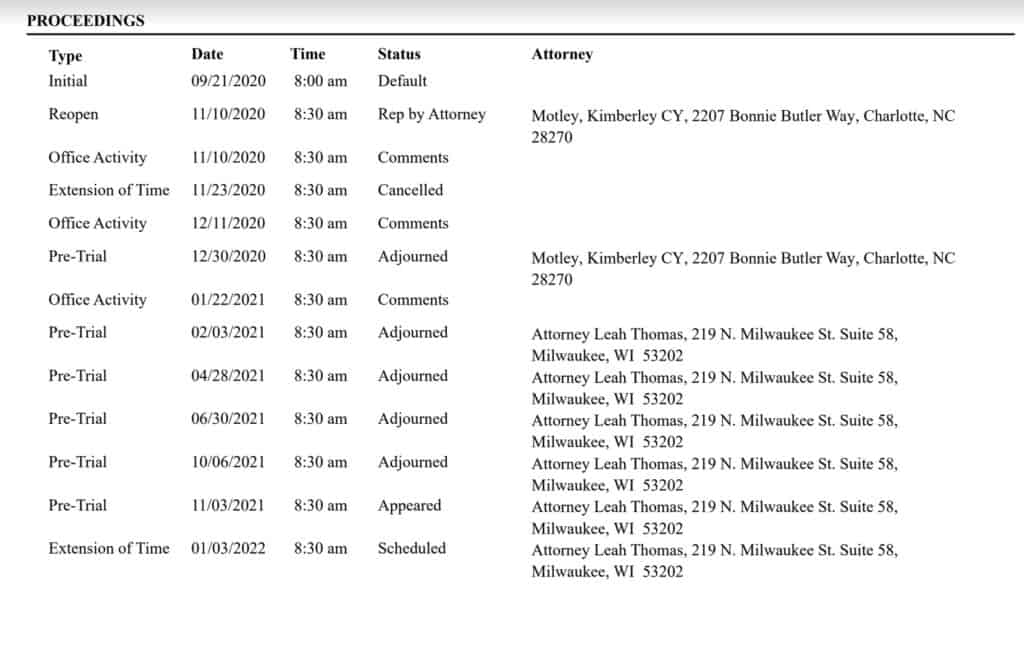 We obtained West Allis police reports that give a fuller picture of Grosskreutz than the glowing articles in many media outlets. The reports had not been previously reported.

“Gaige had no reasons to be there and had no vehicle in the lot. He was previously detained for prowling in the same area and released,” the report says in the prowling case. “Gaige appeared to be videotaping personal vehicles in the rear police parking lot. Gaige made clear his anti-law enforcement views. Gaige was arrested for prowling, booked, cited and released.”

Earlier that summer, he was also investigated in a Facebook threats case, but the victim, who had organized an event to paint over letters in a “defund the police” mural outside Milwaukee City Hall, decided not to press charges, according to West Allis Police reports.

After receiving a tip, we submitted an open records request and received the two police reports involving Grosskreutz, a member of the People’s Revolution group.

We’re reporting on these incidents because they help provide a fuller biography for Grosskreutz, and they give a better sense of the people behind the protest movement that Rittenhouse encountered that day. The media have largely sanitized the men shot in Kenosha, characterizing them as peaceful protesters. We previously reported on the criminal records of all three men shot by Rittenhouse; Grosskreutz is not a felon as some social media posts falsely alleged, but Gaige Paul Grosskreutz does have another previous forfeiture case for not showing obedience to officers, as well as one for loud noises. He was convicted of a criminal misdemeanor in 2016 for going armed with a firearm while intoxicated. He gave a West Allis address. He also was arrested for second-offense drunk driving after the shooting, but that case was dismissed on a prosecutor’s motion right before the trial.

After that story ran, we received the tip that Grosskreutz had the other two incidents in West Allis, which have not been reported before.

But, but, but he was just a”peaceful protestor” holding a cell phone…👇🏼 pic.twitter.com/EEp45iDOqj

Grosskreutz has been the subject of numerous glowing articles in the news media, some of which left out the fact he was armed with a gun at the time. For example, CNN described Grosskreutz this way: “Grosskreutz said he worked as a paramedic before going back to college in Wisconsin where currently he is studying.”

In the West Allis incidents, the first complainant involving the alleged Facebook threat didn’t want charges pressed, so none was. In the second instance, Grosskreutz received a municipal citation for prowling, and he was convicted of loitering for it.

The prowling case dates to Aug. 16. After receiving a tip, we waited for an open records request to be fulfilled before reporting the information.

The report says that an officer found Grosskreutz, now 27, in the West Allis Police Department driveway near the vehicle entrance.

The report says the other alleged loitering incident occurred on August 15, 2020, at 11:59 p.m. Initially Grosskreutz refused to identify himself. He was observed on the west drive of the police parking lot video taping personal vehicles inside the lot that is labeled “employee/staff entrance only.”

He was detained and released that time.

On the second occasion, an officer observed him walking in the grass on the south side of the police parking area between the fence and the driveway. He appeared to be recording vehicles inside the fence.

“When I asked Gaige what he was doing his explanation was nothing and that he could be here,” the police report says.

The area is not well lit and is not an area commonly visited by the public. It doesn’t have sidewalks and commonly has marked squads parked along it. Gaige was parked in the 2300 block of S. 117th Street “raising concerns that he was attempting to conceal his identity as well as his motive for lurking around the police department and rear parking lot,” the police report alleges.

“Based on Gaige’s previous attempt to withhold his identity, his parking away from the property which he decided to lurk around, his previous prowling warning for being in this same area, the time of night, Gaige concealing himself by walking in the grass rather than a sidewalk or driveway, and Gaige having no explanation or reason for being in the area, I arrested Gaige for prowling.”

He was handcuffed and conveyed to booking. The police report says that Gaige refused to provide a current address.

The officer noted that Grosskreutz crumpled up the citation and PR bond and threw them in the garbage of the booking room. He refused to sign the PR bond and was given a municipal ticket for prowling. 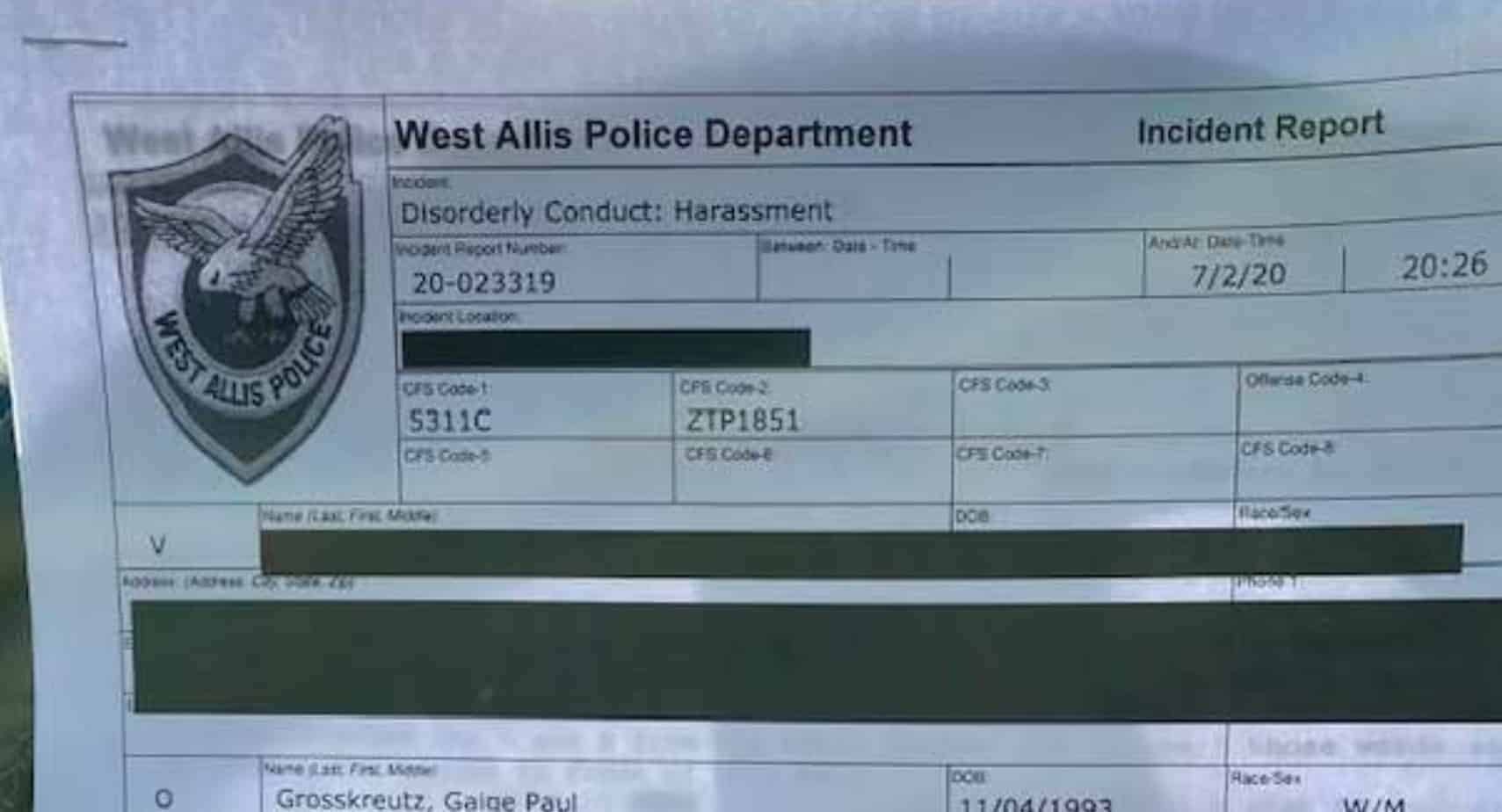 The second police report deals with an alleged disorderly conduct/harassment complaint that came in on July 2.

The report says a man called police to report that he had received threats on Facebook. “The threats were made against him and his wife after he ‘created an event’ on Facebook. The event was pro-police in nature and was meant for people to meet at (a local bar) and then drive to the Milwaukee City Hall. Once there, they would erase the D and E from the words ‘Defund the Police.’”

Those words were painted on the ground in front of City Hall.

The report adds, “One of the subjects who made the threats… was identified as Gaige P. Grosskreutz.” However, the man later stated he no longer wanted officers to pursue the issue.

Fourteen photographs were taken of the remaining messages, some to the man and some to his wife. In one Gaige wrote, “You stay at those apartments on (redacted), right?”

In another message Tone Scott is alleged to have written, “Sorry but your man might be in danger” and “F*** you dumb piece of sh**” and “pssy btch I’ll see you around b*tch.”

The officer called a number for Grosskreutz. A man answered and said, “What the f+++ do you want”?

The officer asked what Grosskreutz had meant when he sent the message. “Gaige would not answer my question and said he had ‘no comment.’”

The officer “told Gaige he cannot threaten people and I was going to mail him a citation for disorderly conduct. Gaige replied, ‘I’ll see you in court!’”

He spoke again to the man who said he decided he didn’t want to take any further enforcement action. Thus, no citations were issued.