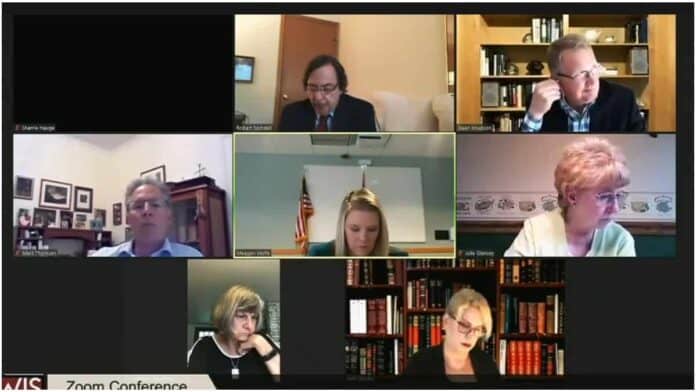 It appears that the state’s top Democrats are okay with the Wisconsin Election Commission and its unelected members unilaterally usurping the state Legislature and deciding which laws to simply ignore, according to a state audit and the sheriff. That’s even though the governor’s own office had instructed the WEC that the law in question – on sending special voting deputies to nursing homes – could not be simply disregarded. The WEC is an agency under Evers.

There is no sign that Attorney General Josh Kaul is going to do anything about Racine County Sheriff Christopher Schmaling’s investigation showing that the Wisconsin Election Commission told nursing homes to ignore state law, leading to cognitively impaired elderly residents voting even though some of them can’t recognize family members.

Evers showed zero interest in the allegations that state law was violated and instead rebuked Assembly Speaker Robin Vos and the Republicans over their criticism of Election Commission Administrator Meagan Wolfe, even though a separate non-partisan audit from the Legislature’s Joint Audit Bureau found that the Commission had violated and disregarded state law in numerous ways.

“Elected officials can – and often do – disagree on plenty. But what is beneath the offices we hold and the responsibility entrusted to us is using our platforms to publicly and baselessly disparage and singularly belittle public servants,” the governor said.

“Speaker Vos’ comments are unbecoming of his office and the people we serve. It’s my expectation – and one Wisconsinites share – that elected officials in this state treat others with civility and respect. The speaker’s behavior today fell woefully short of those expectations.”

What did Vos say?

“People’s trust in Wisconsin’s elections has been tested. Many Wisconsinites feel elections are not safe and secure, and now the Racine County Sheriff’s investigation found clear violations and law-breaking within the Wisconsin Elections Commission,” Vos said. “Clearly there is a severe mismanagement of WEC, and a new administrator is needed. I am calling for the resignation of Meagan Wolfe as Elections Commission Administrator.”

Vos said there are a series of “red flags” that cannot be ignored.

Rep. Rick Gundrum (R-Slinger) said, “Between the results of Wisconsin’s Legislative Audit Bureau and yesterday’s announcement from the Racine County Sheriff’s Office, I cannot see how the current administrator of the Wisconsin Election Commission can rebuild its tarnished reputation. I join my legislative colleagues in calling for Election Commission Administrator Meagan Wolfe’s resignation.”

The Wisconsin GOP said in a statement, “Anyone who cares at all about election integrity owes the Racine County Sheriff’s Department a debt of gratitude for their work today. It is horrific that WEC’s choice to violate state laws may have led to bad actors taking advantage of vulnerable citizens in nursing homes. It’s time for Democrats, the Department of Justice, and the mainstream media to take election integrity concerns seriously.”

State Rep. Joe Sanfelippo, R-New Berlin, said not only does Wolfe need to go, but any and all staffers involved in the Racine case need to be fired as well.

“I am calling for the immediate dismissal of Meagan Wolfe as the Wisconsin Elections Commission Administrator as well as the WEC staff who gave advice to break the law and members of the Elections Commission who voted to break the law. Those actions are the very definition of malfeasance in office,” Sanfelippo said Thursday. “And if the Wisconsin Attorney General continues to refuse to uphold the law then he should resign, too.”

The chairwoman of the WEC, Ann Jacobs, did respond on Thursday.

“To put it simply, we did not break the law,” responded Commission Chair Ann Jacobs, an attorney from Milwaukee and major Joe Biden donor. “In fact, without action from the Commission, many residents in Wisconsin care facilities could have and would have been disenfranchised and not able to vote in the 2020 elections.”

Schmaling and his investigator, Sgt. Mike Luell, a former prosecutor, say they believe commissioners committed crimes by telling nursing home staff to disregard a state law requiring special voting deputies from each party to sign off on ballots. He said guidance on restricting visitation to nursing homes during the COVID-19 pandemic did not have the power of law and, thus, could not trump the SVD law that the WEC disregarded, without authority to do so.

Schmaling and Luell found eight cases in which families raised concerns that cognitively impaired elderly people were taken advantage of and allowed to vote. In one case the person was deemed mentally incompetent, and in another the person’s vote counted after death.

“The Commission finds it horrifying and offensive if that sort of thing happened in Racine, or anywhere in Wisconsin,” Commissioner Dean Knudson said in a statement. “Nobody should ever be coerced or otherwise influenced as part of exercising their right to vote. We would encourage and expect the full force of the law to investigate that situation and prosecute any identified offenders.” Knudson’s comments on the commission’s decision to disregard state law were widely cited by Schmaling in his press conference.

The election commission, in a statement signed by all members except Bob Spindell (who had voted against the commission’s decision to allegedly disregard state law), said,

“In the case of nursing homes and other care facilities, statutes state that Special Voting Deputies (SVDs), and election observers, are to be sent to some facilities to allow for in-person voting for residents. Not every care facility utilizes the SVD process.  For those that do, during the COVID-19 pandemic, only ‘essential workers’ were allowed into nursing homes as part of the required quarantine for residents.”

Schmaling said that the nursing home in question, in Mount Pleasant, allowed many visitors and vendors into the facility, including a fish repair man and vending machine vendors and DoorDash.

Schmaling and Lueck claim that the essential worker claim was merely guidance without the power to trump state law, and that even Evers’ office had acknowledged as such. Furthermore, the Safer at Home order had expired.

“Statutes call for two attempted visits by SVDs to a facility after a 5-day notice period. If the SVDs are not allowed access, then absentee ballots are sent to those residents. Residents complete those ballots in the same manner as other absentee ballot voters.  The timeline for these visits, and the sending and return of absentee ballots, all must occur in the 22 days immediately before an election. In 2020, the U.S. Postal Service advised that clerks should plan for 13 days to send a ballot and have it mailed back to them in time to be counted on Election Day,” the commission said.

But Schmaling and Lueck said that the WEC overrode the law requiring SVDs without them making any attempted visits at all.

Commissioner Mark Thomsen, also a major Joe Biden donor, admitted as such, saying in a statement, “If we had waited for two unsuccessful attempts by SVDs to enter nursing homes, we would have been in danger of missing the deadline to get their votes collected and counted. Our goal was to allow as many eligible voters as possible to participate in the election.”

“We knew that for the protection of residents, only essential workers (which did not include SVDs) were being allowed into facilities across the state,” Commissioner Julie Glancey said. “As such, we knew it was essential to preserve the right to vote for those residents, so rather than require the absurdity of sending SVDs to knock on a locked door, we pivoted to the absentee voting process.”

Again, though, Schmaling and Lueck said there was no law barring SVDs from going to nursing homes; whereas, there was a law saying they had to do so.