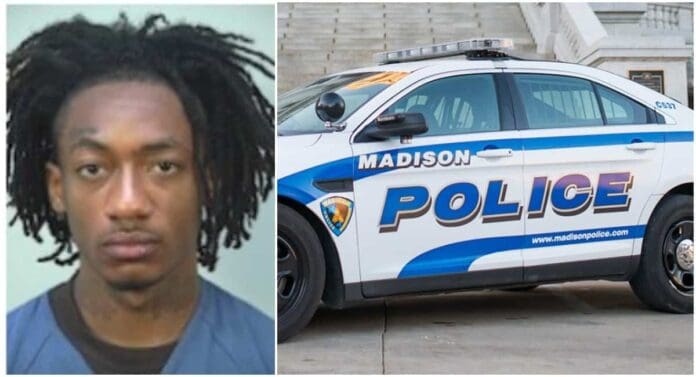 “It is the first time in over 20 years that a Madison police officer has been shot in the line of duty.” – Madison Police Department

Katoine Richardson had 22 pending charges in eight open cases in Dane County, some winding through the court system since 2019 and for which he was released on signature bonds, before he was accused in an incident in which a Madison police officer was shot on State Street.

The most serious case before the shooting of the officer accounted for 11 of the charges, including three felony counts. W. Scott McAndrew, a court commissioner in Dane County, gave him a SIGNATURE BOND.

We can only report on Katoine Richardson’s adult record, as juvenile records are sealed, but they do indicate that he was also adjudicated as a juvenile of another serious offense.

One of the “current residents” in the Dane County Jail (what the sheriff ridiculously calls inmates) is Richardson, who is accused in connection with an incident that led to the shooting of the Madison police officer on State Street in the early morning of Oct. 10, 2021. We ran his criminal history and found a shocking number of pending cases in Dane County Circuit Court that have been stalled in, and winding their way through, the court system since 2019.

Katoine Richardson, 19, of Fitchburg, now faces five more potential charges in connection with the incident that led to the officer’s shooting: He’s being held in the Dane County Jail on accusations of possession of a firearm after being adjudicated delinquent of a felony; causing substantial harm to an officer and resisting; carrying a concealed weapon, felony bail jumping, and misdemeanor bail jumping.

“At approximately 12:37 a.m., Madison police attempted to apprehend a wanted subject in the 500 block of State Street in Madison, Wis. The subject ran from police. During the arrest, a round was fired and an officer was struck. That police officer was taken to a local hospital for non-life-threatening injuries. Another officer sustained minor injuries during the arrest,” the Wisconsin Department of Justice wrote in a news release. “Police took the wanted subject into custody, without injury. The subject was in possession of a handgun.” Madison.com reported that the officer was struck in the arm and leg and is expected to live. The release does not specifically say that Richardson fired the round, though, and police have not released additional details.

Even before that shooting incident, Katoine Richardson had 22 pending charges in Dane County Circuit Court despite being age 19. He has never been convicted of any of them because none of the cases was concluded, and he remained on the streets to re-offend, time and again.

During that time, various court commissioners gave Katoine Richardson chance after chance to remain on the streets while the inefficient bureaucracy of the court system took forever to hear his cases. He had a curfew for a while, but a judge removed it. He kept reoffending, authorities say, over and over again, but, still, he remained on the street, receiving signature bonds in several cases or measly bond amounts, such as $100.

That’s despite the fact the pending cases were serious. One of the incidents involved a burglary and shots fired call in Cross Plains, according to a 2020 article by Channel 3000. That article said that Katoine Richardson, then 18, of Fitchburg, was facing tentative charges of operating a vehicle without owner’s consent, possessing THC and bail jumping. The drug charge was never filed. Channel 3000 reported that there was evidence “linking” Katoine Richardson and a co-actor to a stolen vehicle along with a stolen handgun.

Nov. 5, 2019, signature bond of $500 set by Court Commissioner Brian Asmus. [We wrote about Asmus before when he allowed Milwaukee County Judge Brett Blomme to have unsupervised contact with his two young children, over a prosecutor’s objection, despite the fact that Blomme was accused of sharing and downloading multiple videos showing the graphic rape of young boys, including toddlers, one who was crying during the assault. The court commissioner, while calling the allegations “certainly disturbing,” also rejected a prosecutor’s request for $2,500 bail, opting instead for a $500 signature bond in the Blomme case.]

On Dec. 1, 2020, Judge Julie Genovese went a step farther and removed a 10 p.m. curfew. “CT: so long as defendant has verified employment, curfew is removed. If he loses his job curfew will go back into effect. PTS to inform court if he becomes unemployed.” GPS was ordered.

On March 17, 2021, a bench warrant was issued. There was a “violation report.” He was in custody for another bail hearing March 18. Bail was raised by Court Commissioner Brian Asmus to $1,000 cash. He posted the bail the same day.

On June 17, 2021, he didn’t show up for court. A warrant wasn’t issued because the prosecutor wanted to wait to see if he showed up for another hearing.

Back in court on June 17 for a bail/bond hearing. The warrant was vacated because he had appeared on another case.

Case Details: Bond set at $100 by Court Commissioner Brian Asmus, who ordered Richardson not to operate a motor vehicle and to be at his home by 10 p.m.
Pretrial conference on Oct. 8.