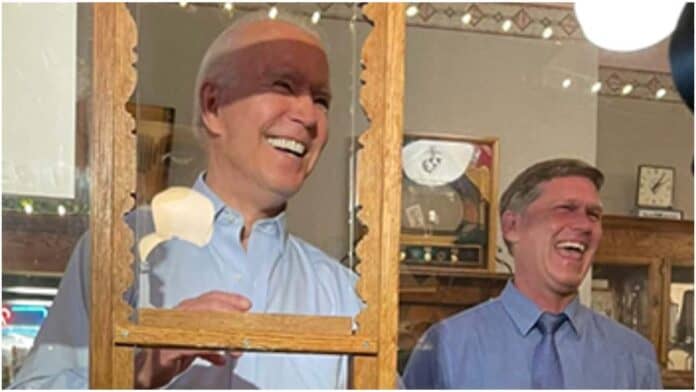 U.S. Rep. Ron Kind, a Democrat from western Wisconsin, claimed COVID-19 prevented him from traveling to Washington D.C. to vote on major bills but still found a way to eat ice cream in La Crosse with President Joe Biden.

“While millions of Wisconsinites went to work on Tuesday, Ron Kind played hooky from his responsibilities in Washington — claiming that he had to miss House votes because of COVID when he was actually getting ice cream with Joe Biden,” the state of Wisconsin Republican Party said in a statement, releasing the above photo.

In a letter to Congress, Kind wrote, on June 28, 2021, “Pursuant to House Resolution 8, I write to notify you of the designation of a proxy to cast my vote. I am unable to physically attend proceedings in the House Chamber due to the ongoing public health emergency, and I hereby grant the authority to cast my vote by proxy to the Honorable Gerry Connolly (VA), who has agreed to serve as my proxy.”

This video makes me cry , President Biden is so kind to everyone, for so long we didn’t have these ice cream cone moments
pic.twitter.com/Pi4obPi2sA

He then went out and ate ice cream with Biden on Tuesday, June 29, 2021. Breitbart wrote, “Scandal-ridden Democrat Rep. Ron Kind (WI) on Tuesday took President Joe Biden out for ice cream at a shop in La Crosse, Wisconsin, just a one-minute walk from a building Kind rents to an embattled massage parlor.”

According to the Milwaukee Journal Sentinel, which obtained the letter, Kind voted on seven bills by “proxy,” including one on use of military force in the Middle East and another on removing Confederate statues. He used proxy voting on Monday and Tuesday, June 28-29, the newspaper reported.

It's past time to update our infrastructure to create good-paying jobs and deliver better roads, bridges, & more. It was great having @POTUS in La Crosse to discuss how investing in infrastructure will help us build back better from the COVID-19 pandemic. Let's get the job done! pic.twitter.com/MzsgnjGKhh

Sharon Abel, Kind’s communications director, claimed to the Journal Sentinel that Kind and the president talked about COVID-19, including “ways we can increase vaccination rates in Wisconsin.” That still doesn’t explain, though, why COVID-19 would prevent him from being able to travel to Washington D.C.

“Whether he’s claiming to be a moderate while supporting Nancy Pelosi for Speaker or claiming a health emergency is causing his absence on the House floor when the entire world knows he’s at a campaign stop with Joe Biden, Ron Kind has become so comfortable that he thinks that he can lie to his constituents and they won’t notice,” the Republican Party wrote.

It’s not the first time that Kind has been accused of “abusing proxy voting.” In May, talk show host Dan O’Donnell wrote, “Over the past 11 months, Kind has seemingly used the proxy vote to take 12 long weekends, a monthlong summer vacation late August, and a two-week break for Thanksgiving before apparently ending his year on December 7 and having a proxy vote for him until after the Christmas recess.” Noted O’Donnell, “Every member of Wisconsin’s Democratic Congressional delegation has falsely claimed to be unable to travel to Washington because of the COVID-19 pandemic.”