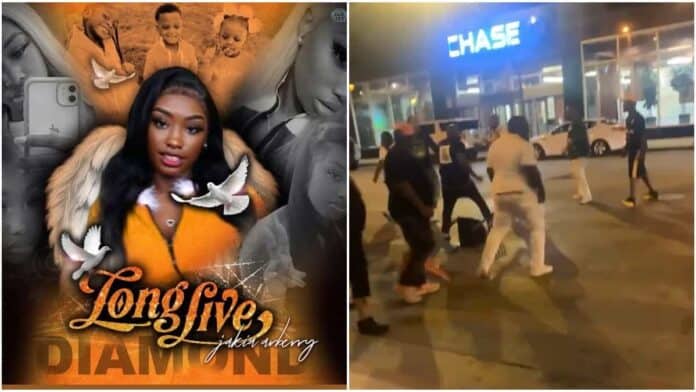 “She was running away and was struck in the back.” – a witness. More than one person was shooting that night.

A 24 year old woman, Diamond Arberry. was murdered early Saturday morning at Water and Michigan Streets after a wild fight involving multiple people spilled outside a nightclub, as the City of Milwaukee continues to fail to prevent the dangerous scenes unfolding in its popular entertainment district downtown. You can watch videos from the scene later in this article.

The chaos was dangerous for police officers as well as the public. Now it’s taken the life of a young Milwaukee mother.

The victim was identified on social media by family and friends as Diamond Jakia Arberry. A woman wrote on Facebook, “Sending prayers love and hugs to my Arberry family for the lost of Diamond last night to senseless violence in our city. We need to do better Milwaukee all these shootings and taking ppl from there loved ones is sick. No family should not have to bury a loved one who living and enjoying life at such a young age. Praying for my family and this city ❤️🙏🏽🙏🏽🙏🏽”

She was a mother of three who described herself as a caregiver on LinkedIn. She was the subject of a past state Supreme Court decision on expunction.

Some of the fight was caught on video. The woman who posted the video wrote on Facebook, “The inside was crazier they were throwing bottles and everything.” A witness told us that the fight grew in the street after this video ended, with as many as 50-60 people fighting, overwhelming the number of cops in the area.

The shooting aftermath was also caught on video:

We spoke to a witness who described the exceptionally dangerous chaos surrounding the latest homicide.

Milwaukee police say a fight broke out in a nightclub around 1 a.m. on Saturday July 17, 2021, and the argument continued on the street, resulting in the shooting death of a 24-year-old woman at E. Michigan Street and N. Water Street.

A 30-year-old man is in custody but hasn’t been named by authorities.

Our witness gave a much more vivid account. The witness, who did not want their name printed for their own protection, told Wisconsin Right Now that there were multiple “people fighting.”

Two men were beating two other men, one with a chair and one with a bottle, according to the witness.

The nightclub where the fight started is Elmnt Lounge, the witness said. That’s located at 618 N Water St., a ways to the south of the most recent past violence. According to the witness, two security guards for the lounge appeared to be involved in the fight.

A man then fired one shot and started running in the direction of police officers, firing two more shots, although the witness felt it was more likely he was targeting the security guards, not officers. Still there were officers close to the gunfire. This reminded us of one of the past Water Street shootings, which unfolded with officers a couple feet, at most, away.

We’ve learned that multiple people were shooting during the incident, including a gunman firing from a car, and police are still sorting out a confusing scene including who fired the fatal bullet that struck Diamond.

“She was running away and was struck in the back,” the witness said.

Diamond Arberry was the third woman shot in or near the popular entertainment district this summer. We were at the scene when one of those women accidentally shot herself after a chaotic fight at Water and Juneau; we also witnessed the aftermath of a second shooting that left a woman wounded and tumbling out of a car at Milwaukee Street just down from Water. Those two shootings were not fatal.

The latest shooting was the second Water Street area homicide this summer; a 31-year-old man was shot and killed at Water and Knapp around 1:40 a.m. June 12.  On July 5, five suspects were accused of injuring two police officers by throwing a pipe bomb at them on Water Street around 12:15 a.m.

We’ve written previously about the city’s inability to get a handle on the chaos and mayhem on Water Street, which started last summer and tends to get worse after midnight as crowds descend on the street blatantly drinking from liquor bottles and smoking marijuana in plain view of police officers. Fights and then shootings have ensued. For weeks, rank-and-file cops, some business owners, and others have desired the ability to have more aggressive intervention. “Several of the city leaders want us to police less. This chaos is the result of less policing,” a law enforcement source told us in mid June.

Since then, the violence has only continued and Saturday that resulted in another life lost.

“There is simply no order,” a frustrated law enforcement source previously told Wisconsin Right Now. The source said officers were told in the past to take a hands-off approach due to fear that activists will riot. We were also told that Mayor Tom Barrett was skittish about plans for more aggressive enforcement on Water Street in the past.