Fort McCoy: Afghan Refugees May Be Sent to Wisconsin in Thousands 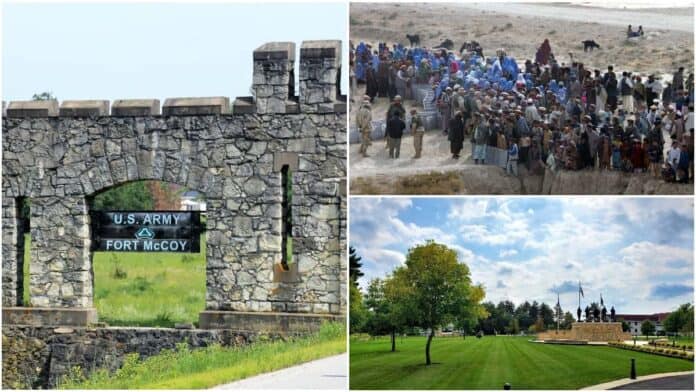 Wisconsin’s Fort McCoy may be poised to get thousands of Afghan refugees, according to a Fox news correspondent.

Jacqui Heinrich, White House correspondent for Fox News, wrote on Twitter on Aug. 15, 2021, “Pentagon confirms to me the Department of Defense is preparing to house thousands of Afghan refugees on American military installations, immediately including Fort McCoy in Wisconsin and Fort Bliss in Texas.”

She quoted a Pentagon spokesman by name for the report.

“We want to have capacity to get up to several thousand immediately, and want to be prepared for potential of tens of thousands,” Pentagon Spox John Kirby told Heinrich, according to her tweets. “Bliss & McCoy have capability right now – what’s advantageous is w/ a bit of work, could increase in short order.”

Fort McCoy is a United States Army installation that is located between Sparta and Tomah, Wisconsin, in Monroe County. It has housed a major influx of refugees before, back in 1980 during the Cuban Mariel boat lift.

Heinrich noted, “Documents obtained from a source show DoD planning to potentially relocate up to 30,000 Afghan SIV applicants into the United States in the immediate future.”

“The situation in Afghanistan may lead to DoS allowing Afghan SIV applicants to be moved to temporary housing locations while still being vetted for parolee status,” the document reads.

This presumes, of course, that refugees make it out of Afghanistan in the first place.

Heinrich added: “The move is a reversal from the Biden administration’s previous policy. On July 8th, President Biden told me the US government could not evacuate Afghan translators to the US to await visa processing like some migrants at the southern border.”

She quoted Biden as saying then, “The law doesn’t allow that to happen. And that’s why we’re asking Congress to consider changing the law.”

Heinrich added, “The State Department will determine who is sent forward – the job of the military is to find facilities and infrastructure for refugees to sleep and receive food and medical care during processing.”

The U.S. Department of Defense wrote in a statement, “At present we are completing a series of steps to secure the Hamid Karzai International Airport to enable the safe departure of U.S. and allied personnel from Afghanistan via civilian and military flights. Over the next 48 hours, we will have expanded our security presence to nearly 6,000 troops, with a mission focused solely on facilitating these efforts and will be taking over air traffic control. Tomorrow and over the coming days, we will be transferring out of the country thousands of American citizens who have been resident in Afghanistan, as well as locally employed staff of the U.S. mission in Kabul and their families and other particularly vulnerable Afghan nationals. And we will accelerate the evacuation of thousands of Afghans eligible for U.S. Special Immigrant Visas, nearly 2,000 of whom have already arrived in the United States over the past two weeks. For all categories, Afghans who have cleared security screening will continue to be transferred directly to the United States. And we will find additional locations for those yet to be screened.”